New Zealand and Sri Lanka lock horns in the second One-Day International (ODI) at the Hagley Oval in Christchurch on Monday. It is the second match of their ongoing five-match ODI series, which will be followed by three-match Twenty20 International (T20I) series. This tour will help both the sides prepare for the upcoming ICC World T20 2016, despite the conditions being different in India. New Zealand have thoroughly dominated their opponents in the Tests and they continued to do so with a thumping 7-wicket victory in the opening one-dayer which was also played at Christchurch. FULL SCORECARD: New Zealand vd Sri Lanka, 2nd ODI at Christchurch

The first ODI clearly indicated the absence of Sri Lankan ace pacer Lasith Malinga who has been ruled out of the first-two matches with an injury. The Lankan attack had no answer to the destructive opening duo of Martin Guptill (79) and Brendon McCullum (55). In the wake of such a poor performance, one would expect Sri Lanka skipper Angelo Mathews and the rest of the team management to make a few changes heading into the second ODI. On the other hand, Guptill has admitted that he has gained a lot more confidence after producing a rich vein of form in the ODI format this year. 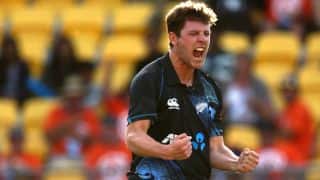