Welcome to Cricket Country's live coverage of the second of the five-match ODI series between New Zealand and Sri Lanka in Christchurch.

By Amit Banerjee and Bhaskar Narayan

Good Morning! Hello and Welcome to Cricket Country’s live coverage of the second of the five-match ODI series between hosts New Zealand and visitors Sri Lanka at the Hagley Oval in Christchurch on Monday. This is Amit Banerjee along with Bhaskar Narayan, and we will be bringing you all the live updates and action of this thrilling tie. New Zealand, who comfortably won the opening contest by seven wickets would look to remain in the driver’s seat, aiming for a win and piling more pressure on the hosts. However, Sri Lanka won’t be giving u so easily and would be no surprise if they manage to bounce back and level terms in the series. LIVE CRICKET SCORECARD: New Zealand vs Sri Lanka 2015-16, 2nd ODI at Christchurch

LIVE CRICKET SCORE: New Zealand 118/0 in 8.2 Overs; BATTING: Martin Guptill 93(30), Tom Latham 17(20): Absolute carnage by Martin Guptill, who tears the Sri Lankan bowlers apart scoring at a strike-rate of over 300 to make the chase look like a real cakewalk! He remains unbeaten on 93 off 30 balls. Well he could have easily. Dushmantha Chameera opens the bowling for the Sri Lankans, and concedes as many as 14 runs including three wides! From that point onwards, its all a Guptill show, hammering 15 in the second over and the 50-run partnership getting completed in just 2.4 overs! The third over is a landmark of its own, with Guptill hitting three sixes and two fours to move to 46 off just 12 — seriously threatening AB de Villiers’ world record for the fastest ODI fifty (16 balls)! As a result, the opening batsman scores the fastest fifty by a New Zealander, beating Brendon McCullum’s record by a ball. The rest of the chase is a cakewalk, although Guptill finishes seven-runs short of what could have been the second-fastest century, though New Zealand win by 10 wickets and take a 2-0 series lead! Read the match report here.

LIVE CRICKET SCORE: Sri Lanka 117 in 27.4 Over; BATTING: Jeffrey Vandersay 7(16): The tailenders try to extend Sri Lanka’s life as further as possible. Chameera is the ninth wicket to fall, getting an edge to the wicketkeeper to give Sodhi his first wicket of the series, while Kulasekara is the last man to depart, making room for himself and looking to clear the covers. Latham jumps and collects the ball high in the air at extra-cover to put an end to Sri Lanka’s misery! Should be another cakewalk of a chase for the Black Caps! Meanwhile, Henry finishes with his second consecutive four-wicket haul!  OUT! Dushmantha Chameera c Luke Ronchi b Ish Sodhi 9(12), Nuwan Kulasekara c Tom Latham b Matt Henry 19(24)

LIVE CRICKET SCORE: Sri Lanka 84/8 in 20 Over; BATTING: Dushmantha Chameera 3(1), Nuwan Kulasekara 0(5): FOUR! Siriwardana decides to attack despite the onslaught by the Black Caps. Picks the line of the first ball of the 16th over beautifully, sending the ball over mid-on to get his first boundary. Chamara Kapugedera plays a straight drive off the last ball to get off the mark with a boundary. FOUR! McClenaghanc concedes a no-ball off the last ball of the 17th over, and Siriwardana sends the ball down towards long-off to get his second boundary. OUT! What is it with Sri Lankan batsmen and short balls? Siriwardana is the next to depart, getting caught by Nicholls at point while going for a cut, getting cramped for room in the process. Things get worse when Kapugedera and Kulasekara get involved in a mix-up, with Kapugedera departing for 12 after getting run-out at the non-striker’s end. New Zealand’s fielding has been sensational today! BOWLED! Senanayeke departs after getting an inside edge off a Henry delivery! OUT! Milinda Siriwardana c Henry Nicholls b Mitchell McClenaghan 12(14), Chamara Kapugedera run out 12(10), Sachithra Senanayeke b Matt Henry 0(4)

LIVE CRICKET SCORE: Sri Lanka 56/5 in 15 Over; BATTING: Milinda Siriwardana 1(3), Chamara Kapugedera 0(0): FOUR! The Sri Lankan skipper is beginning to settle himself at the crease, executing a beautiful flick off Bracewell in the 12th over to send the ball scurrying wide off mid-on for Mathews’ second boundary! Meanwhile, Santner is introduced in the 13th over with spin taking over for a bit. OUT! The brief 23-run partnership between Chandimal and Mathews comes to an end, with Bracewell trapping the former lbw with a delivery pitched outside off that angles into the batsman. And Sri Lanka are in tatters once again after skipper Angelo Mathews edges a short-pitched delivery down the leg-side to the wicketkeeper off McClenaghan’s bowling. OUT! Dinesh Chandimal lbw Doug Bracewell 9(24), Angelo Mathews c Luke Ronchi b Mitchell McClenaghan 17(22)

perhaps we could have two good close contests if NZ was playing Australia, and Sri Lanka was playing West Indies? #NZvSL #AUSvWI

LIVE CRICKET SCORE: Sri Lanka 40/3 in 10 Over; BATTING: Dinesh Chandimal 6(15), Angelo Mathews 5(4): FOUR! Gunathilaka continues to connect well, this playing a beautiful drive over midwicket to score his third boundary of the day! OUT! Thirimanne looks to upper-cut McClenaghan, but ends up serving Henry a simple catch at deep backward-point to depart for 1, with Sri Lanka losing their second wicket with just 29 on board. OUT! BRILLIANT CATCH! Santner pulls off a blinder at point, leaping high to his left after Gunathilaka plays an ambitious drive to depart for 17, with Sri Lanka beginning to crumble here! OUT! Lahiru Thirimanne c Matt Henry b Mitchell McClenaghan 1(5), Danushka Gunathilaka c Mitchell Santner b Matt Henry 17(25)

LIVE CRICKET SCORE: Sri Lanka 24/1 in 5 Over; BATTING: Danushka Gunathilaka 13(18), Lahiru Thirimanne 0(1): The Sri Lankan opening pair will look to improve things today after barely getting their side off to a good start in the previous game. Bracewell comes in to bowl the first over, and goes for a maiden. Dilshan faces Henry in the next over, and cracks his bat in the second delivery. Sri Lanka finally open their account towards the end of the over, with Dilshan sending the last ball towards fine-leg off his pads. FOUR! First boundary off the bat, with Dilshan flicking the full delivery along the middle stump towards fine-leg, before collecting three off the next ball, with Henry saving a run thanks to some brilliant fielding by Henry at fine-leg. FOUR! Gunathilaka into the act now, picks the line of the half-volley between middle and off beautifully, with the ball flying straight over the umpire’s head and bouncing a couple of times before crossing the boundary rope. OUT! Henry gets the breakthrough again! Dilshan comes down the track, anticipating another full delivery. Henry foxes him a slightly short one heading along the leg-stump, cramping him for room. Dilshan freezes in the last moment, and gets an edge off his handle towards Taylor in the slips. Lahiru Thirimanne is the next batsman, and Mitchell McClenaghan is into the attack in place of Doug Bracewell. FOUR! Gunathilaka lofts the penultimate ball of the over high over mid-on, with the fielder failing to stop the boundary. OUT! Tillakaratne Dilshan c Ross Taylor b Matt Henry 7(11)

Toss: Sri Lanka have won the toss and elected to bat first. One change for New Zealand — Ish Sodhi comes in place of the injured Adam Milne. Meanwhile, Sri Lanka have opted to bring Sachitra Senanayake and Jeffrey Vandersay into the playing XI, with the latter set to make his ODI debut.

The Black Caps are firm favourites to go 2-0 up in the series, with the side firing on all cylinders despite the absence of a few key members of their side. Sri Lanka have several issues to address ahead of the second game if they are to prevent another catastrophic collapse, and go one step further towards surrendering the 50-over leg of their New Zealand tour meekly like they did in January. New Zealand vs Sri Lanka 2015-16, 2nd ODI at Christchurch: Preview Stuart Broad: England need to improve their use of DRS 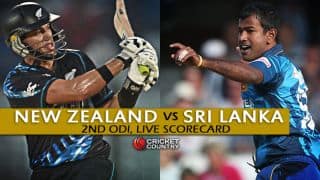