Welcome to CricketCountry's live coverage of Day 3 of the second of the three-match Test series between New Zealand and Sri Lanka in Hamilton.

By Ayush Gupta and Sakshi Gupta

Good Morning! Hello and Welcome to CricketCountry’s live coverage of Day 3 of the second of the three-match Test series between New Zealand and Sri Lanka at the Seddon Park in Hamilton on Sunday. I am Ayush Gupta along with Sakshi Gupta, and we will be bringing you the live updates from today’s play. Sri Lanka, who are currently trailing the series by a 0-1, will look to bounce back in this tie and square things up to set up a decider in the 3rd Test. However, New Zealand, who are unstoppable at home, would look to win it here and seal the series. FULL Cricket Scorecard: New Zealand vs Sri Lanka 2015-16, 2nd Test

LIVE CRICKET SCORE: New Zealand 142/5 | Overs 42 | Target 189 | BATTING: Kane Williamson 78(120), BJ Watling 0(2): STUMPS! Lakmal makes a breakthrough in the last over of the day. A length delivery from Lakmal on the off stump, Santner gets an outside edge giving an easy catch to Chandimal behind the wickets. From here, New Zealand require another 47 runs to win with two days to go in the match. OUT! Mitchell Santner c Dinesh Chandimal b Lakmal 4(19)

LIVE CRICKET SCORE: New Zealand 134/4 | Overs 39 | Target 189 | BATTING: Kane Williamson 73(116), Mitchell Santner 1(7): From here, New Zealand need another 55 runs to win the 2nd Test. McCullum’a attacking innings came to an end once again to a short ball from Chameera. McCullum edged that went a long long way but Angelo Mathews ran towards the cover and took a catch to leave the hosts at 130 for 4. That dismissal has brought Mitchell Santner in. Meanhwile, Willimson is again unstoppable, he has been treating the loose balls well with some excellent shots. OUT! Brendon McCullum c Angelo Mathews b Dushmantha Chameera 18(35)

LIVE CRICKET SCORE: New Zealand 96/3 | Overs 28 | Target 189 | BATTING: Kane Williamson 53(82), Brendon McCullum 1(10): Chameera to Williamson, a fuller delivery and is treated well by Williamson. He flicks it beautifully towards the mid-on and FOUR! And it is another half-century for Willimason. He brought is fifty in the 27th over. In just 75 balls, excellent stuff from the 25-year-old. Earlier, Ross Taylor was beaten by a short ball again. While Taylor goes for a pull, although it was high enough the 12th man Vandersay did not take his eyes of the ball until he successfully came under it and took a superb catch. But he knew he was going to cross the boundary, so he popped it high, he crossed the ropes, he came back and took the catch, to leave New Zealand at 78 for 3. OUT! Ross  Taylor c sub (JDF Vandersay) b Chameera 35(53)

LIVE CRICKET SCORE: NZ 67/2; BATTING: Kane Williamson 31 (52), Ross Taylor 30 (44) — No harm done in the post-tea session so far as both the batsmen continue to bat comfortably as they steadily inch closer to the target and also go past the 50-run mark.

LIVE CRICKET SCORE: NZ 33/2; BATTING: Kane Williamson 10 (18), Ross Taylor 18 (23) — TEA!!!! So New Zealand survive further depletion in their final innings following the quick loss of their openers for cheap, as Williamson and Taylor make sure that they don’t siffer further setbacks before the tea break and would indeed aim to seal it off in the post-tea session as a win by the end of today’s play looks quite possible with just a little above 150 required to win.

LIVE CRICKET SCORE: NZ 12/2; BATTING: Kane Williamson 6 (4), Ross Taylor 1 (1) — COUPLE DOWN!!!! Seems to be the bowlers day out. Just 12 runs on the board, and the Kiwis have lost their opening couple of wickets in the form of Tom Latham and Martin Guptill for four and one, respectively, and it’s Chameera, who strikes again. What a day is he having, and the seamers as well.

LIVE CRICKET SCORE: SL 133; BATTING: Surendra Lakmal 1 (10) — BOWLED OUT!!!! Well, that a surprise, rather a demise. Follwoing a promising start, the middle and lower order just couldn’t live up to as they are bowled out for 133, thus earning a lead of 188, and setting the Kiwis a target of 189 to win.

LIVE CRICKET SCORE: SL 132/8; BATTING: Dushmantha Chameera 2 (9), Suranga Lakmal 1 (4) — COLLAPSE!!!! As the play resumes from lunch, hardly seven overs being played, and the Lankans have lost five crucial wickets, as the Kiwis have charged in. If the remaining innings collapses before tea, we could well se the game ending in the first session itself by tomorrow.

LIVE CRICKET SCORE: SL 85/3; BATTING: Kusal Mendis 45 (85), Angelo Mathews 0 (1) — LUNCH!!!! It’s three down as Dinesh Chandimal is the latest man to be dismissed as he falls for mere four to Neil Wagner, while Angelo Mathews, the skipper, makes his way in. How much can New Zealand restrict them to? See you after the lunch break.

LIVE CRICKET SCORE: SL 76/2; BATTING: Kusal Mendis 36 (77), Dinesh Chandimal 4 (7) — GONE!!!! Finally, a couple of breakthroughs for the Kiwis as Dimuth Karunaratne falls for 27 followed by Udaya Jayasundera for an unfortunate duck, off Doug Bracewell, as Dinesh Chandimal makes his way in.

LIVE CRICKET SCORE: SL 62/0; BATTING: Dimuth Karunaratne 24 (59), Kusal Mendis 36 (61) — No harm done so far to the Sri Lankan innings as they openers continue to bat good, bring up the opening 50-run stand, while the Kiwi bowler extensively look for the opening breakthrough in the Sri Lankan second innings.

LIVE CRICKET SCORE: SL 32/0; BATTING: Dimuth Karunaratne 16 (34), Kusal Mendis 15 (26) — Steady start by the Lankan openers as they look to bat steadily and comfortably, and avoid early setbacks as they choose to be composed rather than being aggressive and attacking.

LIVE CRICKET SCORE: NZ 237; BATTING: Doug Bracewell 35 (52) — BOWLED OUT!!!! New Zealand have been shot out for 237, thus handing Sri Lanka a lead of 55 runs, as the Lankans make their way for the second innings. Dushmantha Chammera’s five-wicket haul does the trick, while opener Martin Guptill was the highest scorer in the innings with 50 runs.

Sri Lanka fought their way back into the second Test against New Zealand with a destructive burst by young quick Dushmantha Chameera on day two in Hamilton on Saturday. Chameera took his first five-wicket bag as New Zealand slumped from 81 without loss in reply to Sri Lanka’s first innings score of 292 to be 232-9 at stumps. Doug Bracewell was not out 30 after a ninth-wicket stand of 31 with Neil Wagner (17) who was dismissed on the last ball of the day. The 23-year-old Chameera, bowling at up to 146 kilometres per hour (90.6 mph), was used sparingly by captain Angelo Mathews, taking three for 17 in his first spell and two for 30 in his second, reports AFP. 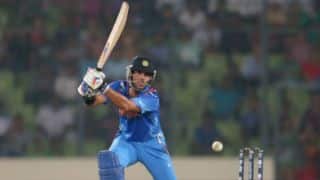 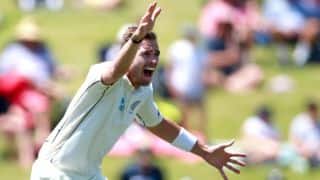