Good Evening, Suba S nd vak! Hello and Welcome to Cricketcountry’s live coverage of the Match 2 of the ICC Women’s World T20 2016, Group A at the Feroz Shah Kotla Stadium in Delhi on Tuesday. I am Ayush Gupta, and I will be bringing to you the live updates from this action. Both New Zealand Women and Sri Lanka Women will play their first match of the series and will look forward to clinch the victory to start the tournament on a high note. The Women’s leg of the ICC major has a different structure than the men’s as there will be no First Round matches. The Feroz Shah Kotla cricket ground in Delhi is one of the major venues to host cricket in India. The ground has so far hosted 2 Women’s One-Day Internationals (ODIs) and 2 Women’s Tests and will play host to many matches during the ICC major.

LIVE CRICKET SCORE: NZW 111/3 in 15.5 Overs. BATTING: Sara McGlashan 21 (14), Amy Satterthwaite 13 (13) NZW WIN!!!! That’s it, as the White Ferns have done it in their opening tie of the oturnament, taming the sub-continental favourites Sri Lanka women by a mammoth seven wickets. New Zealand have certainly proved a point while Sri Lanka have some homework to be done.

LIVE CRICKET SCORE: NZW 103/3 in 15 Overs. BATTING: Sara McGlashan 20 (13), Amy Satterthwaite 8 (10) GONE!!!! Another batsman is down in the form of Sophie Devine, who falls for mere seven off an unfortunate run out, as Amy Satterthwaite makes her way in. It’s almost done for NZW as they have more or less chased it down. OUT! Sophie Devine run out 7 (5)

LIVE CRICKET SCORE: NZW 70/2 in 11 Overs. BATTING: Sophie Devine 2 (2), Sara McGlashan 1 (1) GONE!!!! Acouple of them are down, and it’s the openers, who fall for 37 and 28, respectively, while Sophie Devine and Sara McGlashan make their way in. How things turn out from hereon is inded an intersting question. OUT! Suzie Bates b Siriwardene 37 (37), Rachel Priest st Surangika b Ranaweera 28 (26)

LIVE CRICKET SCORE: NZW 30/0 in 6 Overs. BATTING: Suzie Bates 13 (19), Rachel Priest 14 (11) Safe start by the New Zealand women as the openers in the form of Suzie Bates and Rachel Priest are batting comfortably and make sure that they don’t suffer initial setbacks and settle down as they occasionally smash the biggies.

LIVE CRICKET SCORE: SLW 110/8 in 20 Overs. BATTING: Prasadani Weerakkody 7 (9), Sugandika Kumari 1 (1) THAT’S IT!!!! Sri Lanka women have finished on a below par total of 110 for the loss of eight wickets, as Yasoda Mendis and Dilani Manodara’s knock of 30 and 37, respectively, allow SL to reach the total, despite being in a pressure situation and losing wickets frequesntly. Can New Zealand see off an easy chase?

LIVE CRICKET SCORE: SLW 90/3 in 15 Overs. BATTING: Oshadi Ranasinghe 2 (6), Prasadani Weerakkody 1 (1) GONE!!!! A couple more down in the form of Yasoda Mendis, who falls for a healthy 30 off Amy Satterthwaite, after being caught by Katie Perkins, followed by Eshani Lokusuriyage, who falls for a mere couple, after being bowled by Lea Tahuhu, as Shashikala Siriwardene makes his way in. OUT! Yasoda Mendis c Perkins b Satterthwaite 30 (30), Eshani Lokusuriyage b Lea Tahuhu 2 (5)

LIVE CRICKET SCORE: SLW 55/1 in 10 Overs. BATTING: Yasoda Mendis 25 (24), Dilani Manodara 11 (15) GONE!!!! the opening wicket falls for Sri Lanka as Chamari Atapattu is dismissed for mere 17 by Leigh Kasperek, who bowls her out, while Dilani Manodara is the new batsman, as Sri Lanka go past their 50-run mark. OUT! Chamari Atapattu b Leigh Kasperek 17 (21)

The 10 teams will take part directly in the main tournament. The teams have been distributed in two groups, Group A and Group B. Group A consists of Australia Women, Ireland Women, New Zealand Women, South Africa Women, Sri Lanka Women and the Group B has Bangladesh Women, England Women, India Women, Pakistan Women, West Indies Women in it. Each of the teams will play one match with the rest of the group members and the top two teams from each group will qualify for the Semi-Finals. 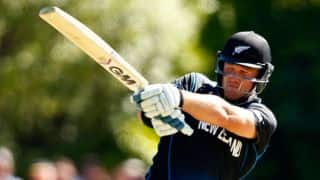