Catch all the updates of Day 1 action between Odisha and Maharashtra here.

Hello and welcome to CricketCountry’s coverage of the first day’s play of the second round match between Odisha and Maharashtra in the Group B of the Ranji Trophy 2015-16.The match between Odisha and Vidarbha in the earlier round ended in a draw, but it was Vidarbha who got the first innings lead and therefore secured crucial three points. Maharashtra on the other hand were able to get a first innings lead over Haryana as they posted a huge total. They did not give their opponents enough time to knock those runs off. By the looks of it they will be the more confident team going into the match, but cannot take Odisha lightly as they will be playing at home. READ: Ranji Trophy 2015-16: Bawane, Khurana ton give Maharashtra three-point draw over Haryana

Live cricket score Maharashtra 226/5 | Overs 85 | Batting: Rahul Tripathi 40 (98), Chirag Khurana 14 (35): Tripathi is approaching his fifty while Khurana is looking to get set. Odisha will look to keep the runs down and keep striking at regular intervals.

Live cricket score Maharashtra 195/5 | Overs 74 | Batting: Rahul Tripathi 15 (55), Chirag Khurana 8 (12): Maharashtra have lost wickets at regular intervals and it is important for these two to build on a sizable partnership. Biplap Samantaray has struck thrice and Suryakant Pradhan has chipped in with two wickets.

Live cricket score Maharashtra 129/3 | Overs 50 | Batting: Harshad Khadiwale 60 (150), Ankit Bawane 33 (82): Khadiwale has found a steady partner in Bawane. For Maharashtra it is important to keep chipping away in this manner while keeping the focus on preserving wickets. Meanwhile Odisha will be hoping to make another breakthrough shortly.

Live cricket score Maharashtra 85/3 | Overs 32 | Batting: Harshad Khadiwale 42 (92), Ankit Bawane 14 (30): At the end of 32 overs, Maharashtra have managed to score 85 runs but at the cost of three valuable wickets. Gugale, Motwani and Jadhav have been dismissed cheaply. So far only opener Khadiwale has looked sedate at the crease and is inching towards a hard fought fifty. He currently has Ankit Bawane for company.

Live cricket score Maharashtra 49/1 | Overs 19 | Batting: Harshad Khadiwale 24 (58), RH Motwani 22 (42): Maharashtra have steadied themselves after the loss of the early wicket of SM Gugale for just two runs. Khadiwale and Motwani are batting at an appreciable rate while also seeming determined on preserving wickets. Out! SM Gugale 2 (14) c Dhuper b Pradhan

It is highly important for both teams to get wins under their belts, so that they can build momentum for the rest of the season. A good start in the tournament can go a long way in ensuring that the teams finish well in the end. The Odisha cricket team has been among the underdogs in Indian domestic cricket. It is one state that can complain of constant under-selection for the Indian team on a consistent basis, having barely produced any international cricketers despite having a great crop of talent in their grassroots. READ: Ranji Trophy 2015-16: Vidarbha settle for three points after draw with Odisha 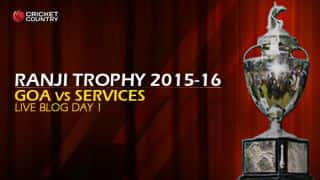