Maharashtra posted a total of 281 in the first innings at Cuttack against Odisha.

Live Cricket Score Maharashtra 123/2 | Overs 45 | Batting: Swapnil Gugale 71(147), Kedar 5(3): Maharashtra have reached a good score of 123 for the loss of just two wickets, their lead has gone up to 137 runs. Maharashtra need to continue this way and if they get a big enough lead on Day Four they could even consider the possibility of declaring and go for the win.

Live Cricket Score Maharashtra 27/0 | Overs 12 | Batting: Swapnil Gugale 4(33), Harshad Khadiwale 23(39): The Maharashtra openers have been quite steady so far although Khadiwale has been more confident of the duo. The lead is of 41 runs.

Live Cricket Score Odisha 267 | Overs 103.5 | Batting: Jayanta Behera 3(26): That was a tense conclusion to Odisha’s first innings with Maharashtra sealing the lead after being under the pump. At 230 for five Odisha looked like favourites to take the lead but Shrikanth Mundhe had other plans as he quickly got rid of Pratik Das and Rajesh Dhuper to give Maharashtra the opening they required. Mundhe later dismissed Deepak Behera and Odisha were unable to overhaul the lead falling short by 14 runs. Mundhe finished with a 6-for.

Live Cricket Score Odisha 239/8 | Overs 92 | Batting Deepak Behera 7 (20), Basant Mohanty 0 (4): Looks like Odisha have blown a great chance to get the first innings lead losing three quick wickets. Shrikant Mundhe got the wickets of a well set Pratik Das and Rajesh Dhuper while Sanklecha got rid of Suryakant Pradhan for a golden duck. The tailenders need to add 43 runs to claim the first innings lead.

Live Cricket Score Odisha 225/5 | Overs 83 | Batting Pratik Das 58 (141), Rajesh Dhuper 9 (16): The match is interestingly poised with both teams vying for the first innings lead. Odisha surely look like the favourites to get it since they need a mere 56 runs to get to it with five wickets in hand. Maharashtra need a double strike.

Maharashtra posted a total of 281 in their first innings thanks to a couple of brilliant knocks from Harshad Khadiwale (74) and Ankit Bawne (60). Mumbai would have hoped for a stronger total after being 231 for 5 at one stage. They though folded up for just 281 adding more 50 runs but losing as many as five wickets. It was Suryakant Pradhan who was the best bowler for Odisha taking 4 for 90. Biplab Samantaray chipped in with three crucial wickets. In reply, Odisha were in trouble at 68 for 4 with Shrikant Mundhe taking three wickets. But since then the pair of Govinda Poddar and Pratik Das have shared a 99-run stand to steady Odisha at 167 for 4. They are still long way away from taking the lead in the first innings and Maharashtra will hope that their bowlers can step up and ensure gain the first innings lead. With so much cricket left to be played, expect a tense battle. 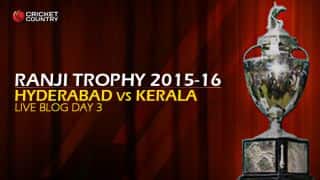 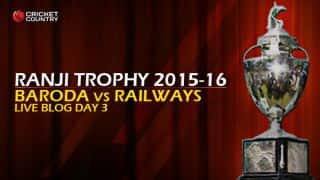 RAILWAYS 221 I Live cricket score, Baroda vs Railways Ranji Trophy 2015-16, Group B match, Day 3 at Vadodara: Baroda win by an innings and 113 Runs