Live Cricket Score, Karachi Kings 179/9| Over 20 |Target 183| Batting: Saifullah Bangash,Momahhad Aamer 0(1) : Darren Sammy comes to bowl the final over, his first of the tournament. SIX first ball, Ravi Bopara, he is showing his class. Two off the second ball. OUT! Sammy picks up Bopara for 67 runs. 5 needed off 3 balls. Run-out, is this the Carribean magic, Sammy keeping it straight and simple. 4 needed off 1 ball. What an over this has been by Sammy, two wickets for just 9 runs.AND SAMMY goes on a victory march. what a thriller of the match this has been.

Live Cricket Score, Karachi Kings 161/6| Over 18 |Target 183| Batting: Ravi Bopara 59(30), Sohail Tanvir 17(12) : Unlucky FOUR, Shaun Tait gives 26 runs in his over. Another FOUR!! Fifty for Ravi Bopara in  in  FOUR! and NO BALL lucky this time as the ball manged to get a bottom edge. SIX!! Ravi Bopara hit one though extra cover, TAIT going for the cleaner. SIX Sohail Tanvir managed to get the ball to top edge and get the ball cross the boundary line.

Live Cricket Score, Karachi Kings 135/6| Over 17 |Target 183| Batting: Ravi Bopara 39(24), Sohail Tanvir 11(8) : Both Ravi Bopara and Sohail Tanvir have looked in complete control of their game after the wicket of James Vince. Shaun Tait had bowled Vince for 44, as one ball just came in for the perfect yorker. Bopara and Tanvir have hit four’s and sixes in every over.

Live Cricket Score, Karachi Kings 85/5 | Over 12 |Target 183| Batting: James Vince32(21), Ravi Bopara 16(12) : Shahid Afridi come in to bowl his 3rd over,  much will depend on Ravi Bopara to provide the big hitting. FOUR!! James VInce finally gets one ball past the boundary line, to give them much need runs. Mohammad Asghar has bowled well after getting hit by SIX in the same over by James Vince. OUT! Shahid Afridi strikes as dangerman Shakib Al Hasan goes for just one run, Shakib was tyring to hit one across the line only to get the ball into the hands of fielder standing at short-third  man.

Live Cricket Score, Karachi Kings 46/4 | Over 7.5  |Target 183| Batting: James Vince10(10) : OUT! Mohammad Asghar has bowled beautifully as he picks up Shoaib Malik who tries to heave one, only to be found out by Darren Sammy. Afridi gave away only seven runs form his over. SIX Shahid Afridi comes into the attack and Shoaib Malik treat him to a massive straight six. What an exciting and a dramatic over it was. Karachi Kings lost as many as two wickets and both due to clumsy running between the batsmen. First to go was Nauman Anwar as he was trying to run a cheeky single short third man. Shahid Yousuf clean throw on to the stumps has him going back to the pavilion. Second to go was Imad Wasim, who was lazy enough to run towards the other end, with the fielder hitting stumps on the run.

Live Cricket Score, Karachi Kings 26/1 | Over 5.1  |Target 183| Batting: Nauman Anwar 15(13), James Vince () :  OUT!! Wahab Riaz cleans up Lendl Simmons for 9, with Karachi Kings at 26 for one. Shaun Tait has given away as many as six runs in his second over thanks to a four by Anwar. Both Lendl Simmons and Nauman Anwar has looked in good form making as many as 20 runs in first three overs. Anwar has hit two boundaries while Simmons have hit single four to Aamer Yamin.

Live Cricket Score,Peshawar Gladiators 182/4| Over 20  || Batting: Shahid Afridi 17(9), Darren Sammy 18(10) :   Sohail Tanvir comes in to bowl the final over. FOUR Darren Sammy french cut’s one to the boundary line. SIX! this time it is Shahid Afridi, goes straight down the ground. SIX Darren Sammy goes monster , the ball goes into the stand.  Aamer comes in to bowl the penultimate over.  SIX Darren Sammy blasts one into the stands. Aamer came back after getting hit for a six, gives only  3 runs after that.  18th Over,OUT!! Dawid Malan gets out trying to play a hit it for a big six only to end up giving a simple catch to Imad.  OUT!! as Ravi Bopara picks up a clean catch only to be reverted back as no-ball. FOUR!! Sohail Tanvir gets a welcome with a boundary with a four by Shahid Afridi. Aamer gave away only four runs in the 17th over, picking up the wicket of Mohammad Aamer. Skipper Shahid Afridi comes out in the middle to support Dawid Malan. OUT! Kamran Akmal goes for a quick fire 30 from 20 ball. Did the eariler knock on the knee did his downfall? Mohammad Aamer into the attack, will to get the wicket of Akmal.

Live Cricket Score,Peshawar Gladiators 142/2| Over 16  || Batting:  Kamran Akmal 30(18),Dawid Malan 10(8) : Imad Wasim comes into the attack. Good start from Wasim, which ended up giving away  runs .FOUR!! well played straight off the ground. MASSIVE SIX over mid-on this time, Kamran Akmal looking to accelecrate. Ravi Bopara comes in to bowl his last over. FOUR!! Dawid Malan cuts on to the boundary line. Well bowled, Bopara gives way 31 runs from his quota of four overs. Usama Mir gives away only 8 runs, which included a mammoth SIX !! BANG Kamran Akmal looking to shift the momentum to the Peshawar Zalmi’s side.

Live Cricket Score,Peshawar Gladiators 110/2| Over 13  || Batting:  Kamran Akmal 9(7),Dawid Malan 0(1) : Ravi Bopara again showing his bowling skills, keeping  the variations going in speed. Bopara so far has managed to pick to two crucial wickets. OUT!! Tamim Iqbal goes trying to loft one above the cover region, holds up giving a simple catch to Simmons. Usama Mir is bowling really well keeping the run rate less, with only 7 runs from his last over. Tamim Iqbal will need to score big after surviving for 31 balls. HUNDRED comes up for the Peshawar Zalmi with his single. Big over from Bopara 13 runs, plus a wicket. FOUR! First boundary for Kamran Akmal, cut hard to a wide ball. OUT! Ravi Bopara strikes as he traps Mohammad Hafeez for 63 runs. Replays suggests that it was missing the leg-stump.

Live Cricket Score,Peshawar Gladiators 86 |Over 10  || Batting: Tamim Iqbal 30(27), Mohammad Hafeez 53(53): Usama Mir last over gave as many as 8 runs as both Tamim Iqbal and Mohammad Hafeez looking in dangerous forms. Hafeez gets to his fifty in just 29 balls. Ravi Bopara now coming into bowl. Usama Mir comes into the attack replacing Sohail Tanvir. Mir in his over gave away 9 runs with a four of the second ball. , Mohammad Hafeez survives, as Lendl Simmons just gets to slow to the ball, missing it by a inch.

Live Cricket Score,Peshawar Gladiators 62/0 |Over 7 || Batting: Tamim Iqbal 18(17), Mohammad Hafeez 43(25) : Shakib Al Hasan to continue, into his second over now. SIX, full toss and Mohammad Hafeez manages to connect it right onto the meat of the bat.FOUR! Tamim Iqbal opening his arms. Iqbal and Hafeez also bring up their 50 runs stand with his two runs. Sohail Tanvir bowling nicely in his bid to try to get the run-rate down, as Hafeez is looking in ominous form, nearing another T20 fifty. Tanvir in his over gave away only 4 runs. Shakib Al Hasan comes into the attack replacing Mohammad Aamer. FOUR! Hafeez scoring big time, on to 35 runs. Al Hasan is bowls a faster one to Tamin Iqbal, as he tries to use his feet. SIX massive one, Mohammad Hafeez enjoying his outing, on a flat pitch.

Live Cricket Score,Peshawar Gladiators 32/0 |Over 4 || Batting: Tamim Iqbal 8(9), Mohammad Hafeez 23(15) : Sohail Tanvir comes into the attack replacing Imad, gives only 7 runs in the over. Mohammad Hafeez pulls a fast one only to be caught by Shakib Al Hasan. Mohammad Aamer gives on 7 runs in his second over. Aamer just misses out on getting the wicket, Hazeef pulls another four, which goes above the fielder.Hafeez survives as the fielder manages to get the just misses the stumps on the throw.

Live Cricket Score, Peshawar Gladiators 18/0 |Over 2 || Batting: Tamim Iqbal 1(2), Mohammad Hafeez 17(10) : FOUR!! This time is the sweep shot that Mohammad Hafeez gets to unravel. Another FOUR! this time straight of the bat. FOUR! Hafeez able to just pat the ball towards the boundary line. Imad Wasim in to the attack with his leg- break.  Excellent first over from Mohammad Aamer giving away just 6 runs.

Kamran Akmal: “Practise with Andy Flower and Majid Khan helping me in my keeping.”

Mohammed Aamer: “A Fast bowler is the beauty of cricket”.

Aamer: “Cricketer’s work is to play and not speak much, rather let their work do the talking.”

Aamer: “Happy by the selection by Karachi Kings in the first round in the draft.”

TOSS: Peshawar Zalmi, led by Shahid Afridi win the toss and elects to bat first. Zalmi make one change Aamer Yamin comes in for Junaid Khan. Karachi Kings also have a change as Nauman Anwar comes in for  Iftikhar Ahmed.

Pitch Report: Another batting friendly track , expect big run on the board.

Karachi Kings started well with a comfortable victory over Lahore Qalandars with a 7 wicket win, making the target of 131 in 15.5 overs, They lost out on the the second match to Quetta Gladiators, as they achieved their target of 147 with just two wickets down. Third match was a close match with Islamadad restricting them to 132. Peshawar Zalmi has been in good form winning their opening encounter by 24 runs over Islamabad United. Zalmi won their second match very easily, chasing 117 runs with the loss of only one wicket. The third match was a disappointment where they lost to Quetta Gladiators by 3 wickets getting through to the total in the second last ball of the match.
Tamim Iqbal is the leading run-scorer for them making 120 runs at an average of 60.00 from three matches, far ahead of any other batsmen with Mohammad Hafeez  coming in second with 64 runs in as many matches. Leading the wickets takers pack are Mohammad Asghar and Wahab Riaz with 6 wickets apiece, with Asghar having an bowling average of 9.66. 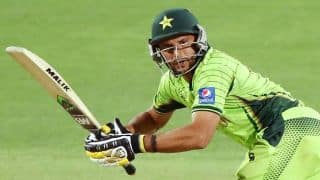