By Abhijit Banare and Sameer Jha

Australia 59/4 I Overs 23
Chris Rogers 23 (77), Steven Smith 3 (17)
Pakistan will pat themselves on the back after a day that gone completely in their favour. Ahmed Shehzad and Younis Khan scored centuries, while Zulfiqar Babar and Yasir Shah bowled double-wicket maidens. Frustrating for Australia, as they’ll now have to bat out of their skins to save the match.
Australia 49/4 I Overs 18
Chris Rogers 17 (63), Steven Smith 0 (1)
Another double wicket maiden. Yasir Shah does the damage. First he gets Michael Clarke out LBW, then does the same to Nathan Lyon! What a performance from Misbah ul-Haq’s men. Only something miraculous can save Australia now.
OUT! Clarke lbw b Yasir Shah 3(9)/ OUT! Nathan Lyon lbw b Yasir Shah 0(3)
Australia 44/2 I Overs 14
Chris Rogers 15 (52)
Stumped! Silly from Warner. He comes down the track and misses. Sarfraz makes no mistake in stumping him out. And another one bites the dust in the same over. Alex Doolan goes for a duck! Australia in deep trouble here.
OUT! Warner st Sarfraz Ahmed b Babar 29 (27)/ OUT! Doolan lbw b Babar 0 (5)
Australia 43/0 I Overs 12
David Warner 28 (25), Chris Rogers 15 (47)
Almost a wicket there! Babar gets Rogers immediately after the drinks break, but DRS comes to Australia’s rescue. It has played an important role in this match. Both batsman will look to play out the remaining 10 (approx.) overs with caution and not lose a wicket.
Australia 25/0 I Overs 6
David Warner 18 (11), Chris Rogers 7 (25)
Australia have not lost any early wickets in their bid to save the Test. Warner doesn’t look to play out the deliveries, and is going for his shots when given width. Rogers has been comparatively mellow.
Pakistan 286/2 I Overs 78
Sarfraz Ahmed 15 (18), Younis Khan 103 (152)
Century for Younis Khan! He becomes the seventh Pakistan batsman to score two centuries in a single Test. What a knock from him! Pakistan have declared with a first innings lead of 437.
Pakistan 245/2 I Overs 72
Sarfraz Ahmed 1 (1), Y Khan 76 (133)
Finally a wicket for Australia. O’Keefe strikes! Shehzad’s wonderful knock, an absolute delight to witness, comes to an end. He attempts to play a cheeky reverse-hit and falls. Pakistan continue to score at a blistering pace, though.
OUT! Ahmed Shehzad lbw b O’Keefe 131 (233)
Pakistan 231/1 I Overs 70
A Shehzad 128 (228), Y Khan 67 (127)
Pakistan are in a commanding position at Tea. Their scoring rate has been quick, and their lead has extended to 381 runs. It remains to be seen how long after Tea will they declare.

Pakistan 214/1 I overs 66
A Shehzad 122(214), Y Khan 56(114)
Two sixes and a four apart from a wide and three runs. 20 from that over. Shehzad is showing his aggressive side. Pakistan’s lead has gone to 365.
Pakistan 190/1 I overs 64
A Shehzad 102(208), Y Khan 52(111)
Terrific knock from Ahmed Shehzad. He hung around nervously but got to his ton in style with a straight drive for four. Disciplined innings from the young batsman. He dodged the slowness of the pitch and neutralised the spinners on a turning wicket.
Pakistan 175/1 I overs 61
A Shehzad 90(106), Y Khan 50(105)
Another Test fifty for Younis Khan. Brilliant innings once again from the veteran. He has taken on Johnson and the spinners. Along with Shehzad they are taking this match beyond the reach of Australia.

Siddle’s the key here. Every other bowler, including Mitch, possible for Pakistan to go after. Siddle’s line’s always gonna be an issue.

Pakistan 164/1 I overs 57
A Shehzad 86(190), Y Khan 44(87)
Shehzad is galloping towards a ton here. Doesn’t care what O’Keefe is up to. He hits a boundary and follows it up with another six hopping down the track. There was a fielder on the fence but he cleared him comfortably.
Pakistan 150/1 I overs 56
A Shehzad 73(186), Y Khan 42(85)
Pakistan have looked positive but haven’t run away with the game. They are looking to set a target of at least 400 but their lack of aggression might hinder them leaving less time to bowl Australia out. Shehzad and Younis have added. The lead at present is 301 and Pakistan have brought up their 150.
Pakistan 140/1 I overs 52
A Shehzad 69(170), Y Khan 36(77)
Quiet run of play in the last four overs. The lead is 291. Pakistan have gained a good psychological advantage over their opponents who look a touch jaded.
Pakistan 132/1 I overs 48
A Shehzad 63(159), Y Khan 34(64)
Positive start from Pakistan post break and predictably so. Ahmed Shehzad hit the last ball of the first over post break for a six. In the next over, Younis Khan hit a boundary off Siddle.

Pakistan 116/1 I overs 44
A Shehzad 55(151), Y Khan 26(48)
A dominating performance from Pakistan in this session. They scored a total of 80 runs but never looked in trouble throughout on a pitch which was supposed to turn. Shehzad has been impressive with his batting. Pakistan will be eager to increase the tempo of the innings as the move ahead.
Pakistan 104/1 I overs 41
A Shehzad 54(128), Y Khan 15(45)
Running between the wickets is not their best skills.Shehzad and Younis have been involved in three miscommunication during this short partnership. Fortunately for Pakistan no harm done.

Ouch! Shehzad cops one in the ribs from Mitchell Johnson #PAKvAUS pic.twitter.com/VeUnZ90g42

Pakistan 96/1 I overs 37
A Shehzad 50(128), Y Khan 10(29)
A fine innings by Ahmed Shehzad. Gets to his third Test fifty in the 37th over. It hasn’t been the easiest of pitches to bat on but he has strolled along smoothly steering Pakistan’s lead ahead.
Pakistan 88/1 I overs 34
A Shehzad 46(117), Y Khan 9(22)
Shehzad is growing in confidence and has looked comfortable all through the day. Will be a well-deserved fifty if he gets there.
Pakistan 81/1 I overs 30
A Shehzad 41(99), Y Khan 7(16)
It’s only in the last 15-20 minutes, Aussie spinners have posed a few questions to the batsmen and the aggressive shots have reduced a bit. 10 runs scored in five overs since Ali’s dismissal.
Pakistan 71/1 I overs 25
A Shehzad 39(83), Y Khan 0(1)
A tough bat pad catch goes down in the 24th over. Shehzad went for a tentative defensive shot and the edge deflected off his pads towards ‘keeper Haddin. But Haddin makes it up by catching Azhar Ali. O’Keefe rewarded for giving good flight to the ball well Younis Khan is the new man in.
OUT! A Ali c Hddin b O’Keefe 30(65)
Pakistan 51/0 I overs 20
A Shehzad 29(69), A Ali 21(51)
Michael Clarke has swiftly brought back his spinners. Steven O’Keefe starts off conceding just one. But Nathan Lyon is getting some sharp turn. Australia still in search of a breakthrough.
Pakistan 44/0 I overs 15
A Shehzad 26(52), A Ali 17(35)
Beautiful cover drive from Shehzad in the second over of the day from Mitchell Johnson. Peter Siddle had bowled the first over of the day. Australia looking eager to make early inroads. Pakistan have a lead of 195 runs.

Rameez Raja during the pitch report says the sides have started to disintegrate but the business areas are still solid and good for batting. Pakistan will shortly resume Day Four with an overall lead of 189 runs.

Pakistan look to press ahead with the advantage against Australia in the first Test at Dubai. After taking a 141-run lead on a pitch with enough turn, the openers steered the team to 38 for no loss at stumps. I am Abhijit Banare and I will bring to you the live updates of the match.

Once Warner was dismissed for 133, Australia came apart again. The middle order failed to capitalise and were dismissed in the 20s. Mitchell Johnson hit a few big shots scoring 37 to take Australia to some sort of respectability and helped to reduce the deficit. With the pitch disintegrating by the day, Australia will have a huge task on hand overhaul whatever target Pakistan set for them. 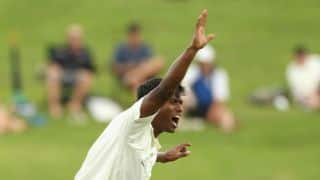 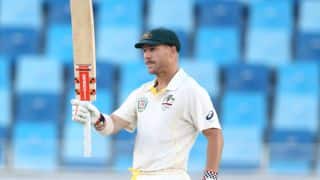