Pakistan resume from their overnight score of 146/3, with Mohammad Hafeez batting on 97.

Hello and welcome to CricketCountry’s live blog of Day Four of the third and final Test between Pakistan and England at Sharjah on Wednesday. I’m Amit Banerjee, and I shall keep you updated regularly on the events from the day’s play. Pakistan will resume from their overnight score of 146 for the loss of three wickets after 53 overs, with Mohammad Hafeez just three runs away from his ninth Test hundred, while night-watchman Rahat Ali is yet to get off the mark. Pakistan sustained a lead of 74, and their chances of setting a formidable target for England in order to boost their chances of securing a series win rests largely on Hafeez, along with the likes of skipper Misbah-ul-Haq and the rest of the middle-order. LIVE CRICKET SCORECARD: Pakistan vs England 2015, 3rd Test in Sharjah

LIVE CRICKET SCORE England 46/2 in 22 Overs: BATTING: Alastair Cook 17(59), Joe Root 6(25): Yasir Shah bowled the last over of the day and England need another 238 runs with eight wickets to spare with tomorrow being the final day of the Test. It will be crucial for Cook annd Root to carry the same momentum tomorrow. It is a difficult task to once again have a great start especially when it is the final day and Pakistan will give their best to dismiss the duo. It is not wrong to assume that if these two got going, it is highly possible that England will square the series 1-1 after losing the opening game.

LIVE CRICKET SCORE England 35/2 in 15 Overs: BATTING: Alastair Cook 12(42), Joe Root 0(0): OUT! Moeen departs after a promising start. Malik traps Moeen Ali leg-before on the backfoot with a delivery that hits him below the knee roll. The left-handed opener goes for the review, and and the umpire’s original decision of ruling him out is withheld. Moeen departs after a 43-ball 22, with England losing their first wicket with just 34 on board. The drama doesn’t end there, as Zulfiqar’s lbw appeal against Cook is turned down in the following over, with the hosts losing a review as well. BOWLED! Malik is on fire at the moment! Pitches along the middle-stump, with the ball continuing along its path to crash into Bell’s off-stump, as England lose their second wicket already! OUT! Moeen Ali lbw Shoaib Malik 22(43), Ian Bell b Shoaib Malik 0(6)

LIVE CRICKET SCORE England 32/0 in 10 Overs: BATTING: Alastair Cook 10(25), Moeen Ali 21(36): Shoaib Malik, who was the pick of the bowlers in the first Test, comes in to bowl the sixth over. Moeen comes down the track to launch him over midwicket, but gets a leading edge that sends the ball towards cover, which is devoid of any catchers, giving the batsman an extra life. Moeen meanwhile, moves into the 20s now.

LIVE CRICKET SCORE England 24/0 in 5 Overs: BATTING: Alastair Cook 6(7), Moeen Ali 16(17): Moeen Ali wastes no time in getting off to a strong start, despatching Rahat Ali for a boundary through backward point. He is however, viciously hit under the back of his helmet — which does not have the protective layer as most helmets these days do — by a Wahab Riaz bouncer. Takes his eyes off the ball and turns his head around while trying to duck, resulting in him getting hit in the sensitive area. Moeen falls to his knees after the blow, and gets treated immediately by the medical team. It doesn’t deter him from continuing the fast-paced scoring rate, as he gets a boundary off the next over as well.

LIVE CRICKET SCORE Pakistan 355 in 118.2 Overs: BATTING: Zulfiqar Babar 0(3): Wahab is playing some fine shots at the moment, hitting a boundary in the 116th over off Moeen Ali to bring up the 350 for Pakistan (seriously when are they going to declare? Like England are capable of chasing a target in excess of 250 on this track!). OUT! Shafiq’s 14th Test fifty has to wait as he has been bowled by a beautiful inswinger by Broad that goes right through the batsman’s gate to rattle his stumps! And the innings finally comes to an end, with Riaz getting run out while attempting to take a risky second run. England need 284 to win the Test and level the series — a difficult prospect given they have rarely scaled a target of this measure in their history. OUT! Asad Shafiq b Stuart Broad 46(109), Wahab Riaz run out 21(27)

LIVE CRICKET SCORE Pakistan 348/8 in 115 Overs: BATTING: Asad Shafiq 46(100), Wahab Riaz 14(19): Riaz walks to the crease alongside Asad Shafiq following the dismissal of Yasir Shah at the stroke of tea. FOUR! Shafiq ends an otherwise good over by Patel by smashing the last ball of his over towards deep-midwicket. Wahab Riaz shows that he is capable of the strokes as well, smashing a full-toss from Rashid through the covers for a boundary in the next over. SIX! Shafiq gets his first big shot of the innings, smashing the last ball of the 113th over towards long-on by coming down the track. Shafiq in the 40’s now, with his 14th Test fifty beckoning.

LIVE CRICKET SCORE Pakistan 319/8 in 109.2 Overs: BATTING: Asad Shafiq 28(68): Pakistan have lost a string of wickets, but have established a significant lead, which probably will be good enough to win the match and seal the series. England on the other hand will want to make sure that they get the final two wickets at the earliest. OUT! Mohammad Hafeez c Bell b Ali 151 (266), Sarfraz Ahmed b Patel 36 (36), Yasir Shah c Broad b Rashid 4 (16)

LIVE CRICKET SCORE Pakistan 308/6 in 105 Overs; BATTING: Asad Shafiq 28(68), Sarfraz Ahmed 32(26): FOUR! Pakistan move to 299, with Sarfraz slapping the second ball of the 102nd over by Rashid towards midwicket for a boundary! And Pakistan breach the 300-run mark a couple of deliveries later as Sarfraz takes a single. Pakistan are currently favourites to set a target in excess of 300, with their lead now touching 228 runs. While Shafiq is batting steadily, wicketkeeper-batsman Sarfarz is playing a run-a-ball innings at the moment, who moves to 32 with a boundary off Samit Patel towards long-leg with a sweep!

Sarfraz repeats the shot after a couple of deliveries in the same over this time towards backward square-leg. BOWLED! Patel gets rid of the dangerous-looking Sarfraz with a beauty of a delivery — pitched along the middle stump and turns away from the batsman, rattling the furniture along its way. Yasir Shah arrives at the crease, and gets off the first ball with a boundary down the ground. OUT! Sarfraz Ahmed b Samit Patel 36(36)

LIVE CRICKET SCORE Pakistan 292/6 in 100 Overs; BATTING: Asad Shafiq 28(61), Sarfraz Ahmed 16(20): Four! Sarfraz whacks Rashid through point for a boundary, with six runs coming off the 96th over. Shafiq, meanwhile, is connecting really well as he hits Moeen and Rashid for a boundary in consecutive overs to keep the scoreboard ticking. Pakistan are eight runs away from the 300-run mark, and look with their lead now worth 220. A target of 250 would be a safe bet for the likes of Yasir, Zulfiqar and Malik on the turning Day Five track, given the fact that England have barely chased totals in excess of 200 in subcontinental conditions.

LIVE CRICKET SCORE Pakistan 260/6 in 92 Overs; BATTING: Asad Shafiq 10(24), Sarfraz Ahmed 2(9): And England have finally managed to get the big wicket of Mohammad Hafeez, whose monumental innings of 151 comes to an end. And it is Moeen Ali once again who gets the big breakthrough! Hafeez comes down the track and plays a poorly-executed slog, with Ian Bell running to his left to complete the catch near long-on. Two new batsmen at the crease now, although Asad Shafiq and Sarfraz Ahmed have been in fairly good touch in the series so far, and will be instrumental guiding their side past the 300-run mark. OUT! Mohammad Hafeez c Ian Bell b Moeen Ali 151(266)

LIVE CRICKET SCORE Pakistan 247/5 in 86 Overs; BATTING: Mohammad Hafeez 145(246), Asad Shafiq 2(5): England finally manage to break the 93-run fifth-wicket partnership between Hafeez and Misbah, with the latter getting trapped leg-before off a Broad delivery that hit him of the knee-roll. The Pakistani skipper immediately starts walking back to the pavilion, apparently convinced of the accuracy in the umpire’s decision to rule him out, as he departs after making a useful contribution of 38 off 86, which included two fours and a six. While Misbah’s streak of four consecutive 50-plus scores in this series comes to an end, Hafeez gets to his 150 in 262 balls with a cover drive. OUT! Misbah-ul-Haq lbw Stuart Broad 38(86)

LIVE CRICKET SCORE Pakistan 229/4 in 81 Overs; BATTING: Mohammad Hafeez 145(246), Misbah-ul-Haq 31(73): Pakistan have extended their lead after the dismissal of Rahat Ali, who was the night watchman. Hafeez looks set to get a huge score , which could be huge problem for England. The bowlers have toiled hard but have not had much success. England will look to pick up a few wickets when play resumes after lunch. Here’s  our lunch report

LIVE CRICKET SCORE Pakistan 206/4 in 72 Overs; BATTING: Mohammad Hafeez 134(226), Misbah-ul-Haq 19(39): Misbah lights up the proceedings after a couple of dull overs, bringing up the 200-run mark with a massive six over long-on! Finally, Pakistan skipper breaks his ‘tuk-tuk’ image for once, and shows what he is capable of once he settles in his innings. Hafeez, meanwhile, is accumulating runs slowly at the other end.

LIVE CRICKET SCORE Pakistan 178/4 in 65 Overs; BATTING: Mohammad Hafeez 119(202), Misbah-ul-Haq 6(21): Broad misses out on an opportunity to dismiss Hafeez in the 62nd over, but fails to hold on after getting a bit of hand on it. The ball flew to his left real quick, and it would’ve required some amazing reflexes to execute the catch. Meanwhile, Hafeez is getting the boundaries along at the moment, with Misbah still playing a steadfast innings. Pakistan lead by 106 runs.

LIVE CRICKET SCORE Pakistan 165/4 in 60 Overs; BATTING: Mohammad Hafeez 108(180), Misbah-ul-Haq 4(13): Pakistan lose the wicket of night-watchman Rahat Ali, who departs for a 12-ball duck after getting bowled by James Anderson. Meanwhile, Mohammad Hafeez finally gets his ninth Test hundred! The long, anxious wait finally comes to an end as the Pakistani opener takes a single to get to the mark. That should take off a large chunk of pressure off his head, and he should be able to bat more freely right now, with Misbah-ul-Haq for support at the other end. Pakistan lead by 93 runs. OUT! Rahat Ali b James Anderson 0(12)

Hafeez got the hosts off to a formidable start thanks to a 101-run opening stand with Azhar Ali, who made his first appearance in the ongoing series after missing out on the first two games due to a toe infection. After seeing off James Anderson and Stuart Broad’s early overs, in which the two pacers were not giving anything away for the most part, Hafeez decided to go after the spinners in order to get the runs flowing.

The opening stand ultimately came to an end courtesy some horrible running between the wickets, that saw Azhar stranded at one end. Shoaib Malik, who announced his retirement shortly after the end of the day’s play, was dismissed for a golden duck in what would ultimately turn out to be his final Test innings. 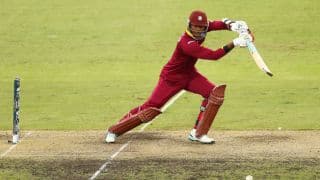 Sri Lanka vs West Indies 2015: Likely XI for the visitors