England resume from their overnight score of 46/2, with the Pakistan spinners looking to devour the batting lineup.

Greetings! Assalaam Alaikum! Welcome to CricketCountry’s live coverage of the fifth and final day of the third Test between Pakistan and England at Sharjah on Wednesday. This is Amit Banerjee, and I shall be presenting the live updates of the match in order to keep you abreast with the latest happenings. England were staring at the prospect of a defeat both in the current game as well as in the series when they were reduced to 46 for two at stumps on Day Four, with Alastair Cook and Joe Root batting on scores of 17 and 6 respectively. Shoaib Malik turned out to be the hero with the ball for the second time in the Test, removing both Moeen Ali and Ian Bell to end the day with figures of 7-3-8-2. LIVE CRICKET SCORECARD: Pakistan vs England 2015, 3rd Test in Sharjah

Man of the Match: Mohammad Hafeez.

LIVE CRICKET SCORE England 156 in 60.3 Overs │ BATTING: Alastair Cook 50(148), Stuart Broad 10 (7): That’s it! Pakistan have won the match and the series 2-0. Alastair Cook was the lone fighter for England with 63 runs. Pakistan have done a professional job, getting rid of the remaining eight wickets without any difficult. Malik and Yasir manage to fox Cook and Stokes to get the last two wickets, with both batsmen getting stumped after getting deceived by the line and length. Emphatic win for the hosts, who continue their unbeaten run in UAE, and move to the No. 2 spot in the latest ICC Test rankings! England have a lot to ponder over in the coming days, as they will look to make get some pride in the ODIs and T2oIs. OUT! Stuart Broad c Malik b Shah 20 (23), Alastair Cook st Sarfraz b Malik 63 (164), Ben Stokes st Sarfraz b Yasir  12 (12)

LIVE CRICKET SCORE England 120/7 in 53 Overs │ BATTING: Alastair Cook 50(148), Stuart Broad 10 (7):  England go to lunch in a deep trouble but Alastair Cook is the only batsman, who is standing up to the the bowlers at the moment. He has brought up his fifty and has Stuart Broad for company at the other end. OUT! Adil Rashid b Rahat 22 (72)

LIVE CRICKET SCORE England 90/6 in 40 Overs │ BATTING: Alastair Cook 42(114), Adil Rashid 14(35): Cook and Rashid’s partnership is worth 31 at the end of 40 overs, with England 10 runs away from getting to the three-figure mark. Rashid meanwhile, is playing yet another valuable fourth-innings as Pakistan are suddenly looking for options to somehow get rid of these two.

LIVE CRICKET SCORE England 76/6 in 35 Overs │ BATTING: Alastair Cook 33(98), Adil Rashid 6(24): Cook is batting solidly at one end even as wickets tumble one after another at the other end. The England captain has moved into the 30s, and he has the opportunity to get his 46th Test fifty, which he missed out on by one run in the previous innings. While it may be a mountaineous task for him to guide his side to victory, which will elevate him to legendary status should he do that, he can atleast get a big score and guide his side to a somewhat respectable score.

LIVE CRICKET SCORE England 62/6 in 30 Overs │ BATTING: Alastair Cook 26(88), Adil Rashid 2(7): And the Pakistani spinners are weaving the web of death around the England batsmen, except maybe Alastair Cook, who is batting solidly in the 20s. OUT! Taylor fails to repeat his heroics from the first innings as he edges a Zulfiqar delivery, that is pitched along the middle and spins away from the batsman, enough to get an edge on Taylor’s bat, who was looking to defend. OUT! England are losing wickets in tandem right now, as Bairstow is trapped lbw by Yasir. Gets down on one knee and attempts to sweep it towards square leg, and ends up getting hit on the right thigh that stops the ball from crashing between the middle and off stumps, which the hawkeye during the review shows. OUT! Are England going to be bowled out before lunch? Samit Patel departs for a golden duck, dismissed lbw by Zulfiqar! No more reviews for England, and the hawkeye tells us the ball would have clipped the leg stump! OUT! James Taylor c Younis Khan b Zulfiqar Babar 2(9), Jonny Bairstow lbw Yasir Shah 0(4), Samit Patel lbw Zulfiqar Babar 0(1)

LIVE CRICKET SCORE England 54/3 in 26 Overs │ BATTING: Alastair Cook 23(72), James Taylor 2(7): Cook and Root walk towards the ground with a sense of purpose in mind — that of saving the Test for their team, if the prospect of winning is too tough. And that is not to be for Root, who is trapped leg-before wicket (lbw) off the bowling of Yasir Shah in the second over of the day! England lose their third wicket with just 48 on board, and it is a massive blow for them! OUT! Joe Root lbw Yasir Shah 6(29)

Moeen helped get England off to a quick start after being set a target of 284, a stiff prospect given their poor record of chasing big totals as well as the prospect of the Pakistani spinners excelling on the pitch that will offer massive assistance on the final day. The left-handed opener, who was struck on the back side of his helmet by a vicious Wahab Riaz bouncer, struck a couple of boundaries to move to 22 off 43 balls, before getting trapped lbw by Malik, losing the review after that.

Ian Bell, who had struck a slow by useful 40 in the first innings, was foxed by a Malik delivery that was pitched on the middle-stump from around-the-wicket, and continued along it’s trajectory to crash into the off-stump as England lost their second wicket. The tourists had a few more scary moments thereafter, with Pakistan using up both of their reviews, as they now need 238 runs to win on the final day with seven wickets in hand, not counting Ben Stokes who can hardly bat after injuring his right shoulder on the opening day. 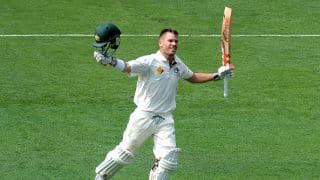 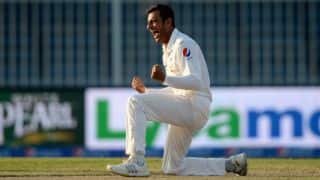