Catch all the live updates of Day three of the first Test between Pakistan and New Zealand here.

(Pakistan had a great Day 1 and Day 2 in the opening Test against New Zealand. They registered a huge score in board. Now they would like to dominate the Test match with their spin attack from here. Can Kiwis put up a fight? Catch all the live updates of Day 3 of this Test here)

Mohamaad Hafeez takes strike. Trent Boult runs in. Good first ball. A good yorker. Tim Southee starts the second over. Good first ball outside the off-stump. The next ball not so good, drifts toward the leg-stump Azhar Ali clips him away for two.

OUT! BJ Watling leg before Zulfiaqr 42

OUT! Ish Sodhi b Yasir Shah 25

New Zealand are all out. Watling falls leg-before for a well-made 42. Will Misbah enforce the follow -on. Remains to be seen. No he does not. The last time Pakistan enforced a follow-on way twelve years back incidentally against New Zealand

Sodhi and Watling are somehow hanging on for the Kiwis. Watling nears his half-century. He’s played well for his 39. The Kiwis would dearly like him to continue.

Both Ish Sodhi and BJ Watling are surviving. Zulfiqar Babar brought back again. Pakistan would hope to wrap up the tail today itself. Watling has farm the strike now. New ZEaland would hope to see out today. The new ball has been taken.

New Zealand in trouble. They are in danger of not avoiding the follow on. After Latham got out they have lost two more in quick succession. Remains to be seen if they will avoid the follow on. Lots of time left still.

OUT! Mark Craig run out 1

Latham out leg-before for a fantastic 103. in comes Mark Craig. Pakistan will look to end the innings fast now.

Latham brings his maiden Test ton up with a beautiful shot down the ground. He emulates his father Rod. He needs to go on from here. New Zealand would be thankful for this. The scorecard would have looked a lot worse if not for him.

Imran Khan runs in. He would be hoping to take his first wicket.  Latham edges closer to his hundred. Zulfiqar Babar has been brought on again. A close shave there for Latham. Did he edge that one off Imran Khan? Latham hits that for a four. He’s five away from his hundred.

Tom Latham takes first strike after tea. He’s twelve short of a hundred. If he gets there it will be his first Test ton. His dad has hundred against Zimbabwe. Pakistan bowlers would want to bowl New Zealand out as soon as possible. Imran Khan runs in. Good yorker there. Ahmed Shehzad has been ruled out of this Test.

Tea Day 3: Pakistan are way ahead at on Day three. They are chipping away at the wickets. Anderson, who was looking comfortable against the spinners dragged one back off Rahat while Neesham’s horrid game continued when he came down and missed one from Hafeez. The visitors still trail by 380 runs and they need someone to support Latham, who has looked solid at one end. He will be looking for his hundred.

Latham continues in the same manner. He’s into the seventies. Watling has survived so far.Yet another appeal. There have been numerous numerous appeals throughout the day. Babar beats Watling there.

Neesham playsd an irresponsible stroke and is stumped. Hafeez is delighted. No need for that stroke. Latham looking to consolidate. He’s fought it out.  Long way to go for New Zealand still.

Losing Anderson was a bad blow. He was batting well and did not look in apparent discomfort. He was perhaps a tad unlucky to edge one to his stumps, furthermore he was two short of a half-century. Latham now has to somehow ward off the Pakistani bowlers. Now survival is the need of the hour.

OUT! C Anderson b Rahat Ali 48

Out! Corey Anderson gone. He was looking dangerous there . Rahat Ali has inside edging one on to his stumps. SEcond time he’s done that today. Pakistan would be relieved.

Corey Anderson starts in an attacking manner. Good ball from Yasir Shah there. That one spun sharply. Anderson is dealing in boundaries. He’s an attacking player by nature and that’s showing. Now he comes down the track and hits Hafeez for four. How will Pakistan respond to this?

Mohammad Hafeez begins proceedings after lunch. Latham sees him off. He is nearing his half-century. It is crucial for the New Zealand opener to continue. More he stays in the middle he’ll grow in confidence. Corey Anderson has started off well after lunch. He’s  swept one for four.

Lunch Day 3: Another session, belongs to the hosts. Pakistan took three important New Zealand wickets and gave away only 66 runs in the first session of the day. As expected Kiwi batsmen are struggling against spin and the trcack is turning a bit too. Zulfiquar Babar took two of the three wickets which have fallen so far.

Latham sticking around for New Zealand. Babar back into the attack . He would be hoping pick up another wicket here. New Zealand are already in a spot of bother. They have to ensure that they survive the follow on.

Tom Latham is still there. New Zealaand breathe a sigh of relief. Their three star batsmen are McCullum, Ross Taylor and Kane Williamson are back in the hut. Corey Anderson comes in. Latham has to stay for sometime now. He needs support. Babar is in terrific form. It’ll be hard for the New Zealand batsmen to survive.

OUT! K Williamson b Ali 3

New Zealand in trouble now. Kane Williamson out for 3. A yorker which he inside edges on his stumps. The batsman tried to keep the ball away from the stumps but the ball clatters into them. Pakistan will be happy to be see the back of Williamson. He’s a good player of spin.

Babar produces the first breakthrough for Pakistan. McCullum edges one to first slip Younis Khan. In comes Kane Williamson. He’s immediately off the mark . Mc Cullum’s dismissal was brought about by a ball that spun away.  Babar has Latham in trouble as well.

Both bowlers are keeping it tight. Latham is looking the more assured of the two. McCullum on the other hand especially against the pacer Imran Khan has been in a spot of bother every now and then. Rahat Ali, the left-arm seamer, is introduced now. Misbah ul haq is ringing in the changes fast. Imran Khan had a four over spell only. Yasir Shah bowled one over only.

Imran Khan is causing some problems for McCullum. Another delivery that swings and misses the stumps by a few inches. Latham at the other end has not been in much trouble apart from that one uncertain dab off Zulfiqar which resulted in a dropped catch at forward short leg.

Brendon McCullum takes first strike. Pakistan beginning with spin in the form of Yasir Shah. The openers McCullum and Tom Latham have a huge task ahead of them. McCullum gets it away for one. Pace from the other end in the form of Imran Khan. First ball is pitched up. McCullum is watchful and plays it away to mid-off. He drifts toward the leg-side and the New Zealand skipper gets it away for one. Imran raps McCullum on the pads. Close one there. Pakistan go the review but to no avail. Zulfiqar Babar on now. A chance put down at forward short leg.

Hello and welcome to CricketCountry’s coverage of the first Test between Pakistan and New Zealand at Abu Dhabi. I am Indrajit Dutta, and I will be bringing you live updates from the third day’s play.

Ahmed Shehzad hit a career-best 176 before being rushed to hospital with a fractured skull as Pakistan’s batsmen smashed New Zealand around the ground in the first Test on Monday. Younis Khan and Misbah-ul Haq also hit dominant tons to put Pakistan in control on 566 for three declared. But Shehzad’s injury briefly set alarm bells ringing.

In the final over before lunch, Shehzad was hit on the side of the head trying to hook a short ball by New Zealand seamer Corey Anderson on the hard Abu Dhabi wicket. Shehzad’s bat struck the stumps for a hit-wicket dismissal and the dazed batsman fell to the ground before walking off. He was later rushed to a hospital where scans showed he had a minor skull fracture and will be kept under observation for the next 48 hours.

Before the drama, he Shehzad hit 17 fours and a six in his 371-ball innings. While team managers worried about the opener, Younis went on to smash an unbeaten 100 — his 28th Test hundred and fourth in five innings. Misbah knocked an unbeaten 102, his third ton in three innings. Azhar Ali missed his hundred after he was dismissed for 87.

At the close on the second day New Zealand were 15-0 with Brendon McCullum on nine and Tom Latham on five. They need another 352 to avoid the follow-on. Younis, who scored 468 runs against Australia in a series which ended last week, hit ten fours in his 141-ball knock, AFP reported. 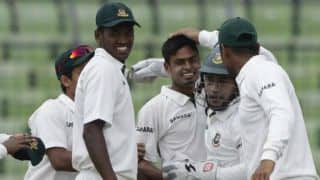 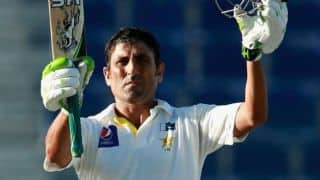