akistan need just two wickets on the final day for a 1-0 lead in the 3 match series.

Pakistan produced another ruthless performance to move to the  brink of victory in the first Test against New Zealand in Abu Dhabi on Wednesday. A ninth wicket stand of 36 in 14.5 overs between Mark Craig (27) and Ish Sodhi (27) delayed Pakistan’s victory on the fourth day at Sheikh Zayed Stadium but New Zealand were struggling on 174-8 after being set a daunting target of 408. Catch live score and ball-by-ball commentary of the 1st Test here

Pakistan need just two wickets on the final day for a 1-0 lead in the three-match series while New Zealand still need 306 for an unlikely win on the fifth and final day. Spinners Zulfiqar Babar (2-30) and Yasir Shah (2-49) and seamer Rahat Ali (2-38) destroyed the New Zealand batting. Earlier Mohammad Hafeez hit an unbeaten 101 to help Pakistan declare their second innings on 175-2 before the bowlers took over and skittled the Kiwi batsmen.

It was a weak batting display by New Zealand who promised a lot before the Test but only Brendon McCullum (39), Corey Anderson (23) and Kane Williamson (23) offered little resistance. McCullum and Tom Latham (20) gave New Zealand a confident start of 57 runs before Babar had first innings centurion Latham top-edging a sweep to Shah. Four runs later Shah trapped McCullum and then had Ross Taylor out in the same fashion for eight, leaving New Zealand reeling at 47-3. Anderson and Williamson added 42 for the fourth wicket but calamity struck as three wickets fell in the space of just five balls.

Hafeez had Williamson stumped while Rahat dismissed Jimmy Neesham and BJ Watling off successive deliveries — both without scoring. Rahat’s pace partner Imran Khan then had Anderson leg-before as the batsman offered no stroke to a straight delivery while Babar cleaned up Tim Southee for five. Hafeez reached his sixth Test hundred, with a couple off McCullum. In all he hit two sixes and 12 boundaries during his 130-ball knock. It was Hafeez’s first century since his 196 against Sri Lanka in July 2012, AFP reported. 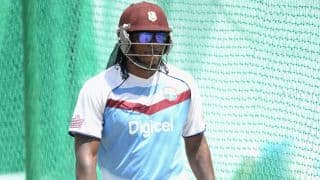 Bangladesh vs Zimbabwe, 3rd Test at Chittagong, Day 2: Zimbabwe bounce back; Bangladesh 384 for 5 at lunch