Mohammad Hafeez struck an unbeaten 178 to propell Pakistan to 281/3.

Pakistan and New Zealand battle it out on the second day of the ongoing third and final Test at Sharjah on Thursday. Pakistan are currently leading the three-Test series by a 1-0 margin, and are on top of the current Test after finishing on a score of 281 for the loss of three wickets, courtesy Mohammad Hafeez‘s knock of 178 off 262 deliveries.

The first ball of the match was smashed for a boundary off Hafeez’s bat, which he repeated off the very next over as well. The bowling was handled initially by Trent Boult and Tim Southee, before Vettori was brought in to the attack in the 10th over, replacing Southee in the process. Hafeez did not get into the emotions of Vettori’s return, smashing the veteran for a six at the end of the 12th over.

The opening partnership could not reach the 50-run mark, as Shan Masood was dismissed off the bowling of Mark Craig in the 17th over, with 44 runs on the board. Pakistan ended the first session at a score of 82 for one, with Hafeez and Ali unbeaten on scores of 47 and 20 respectively. 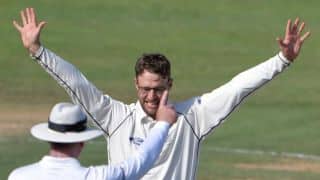