The visitors are trailing Pakistan’s by 286 runs.

Pakistan and New Zealand meet on the Day Four of the third Test at Sharjah on Sunday. New Zealand were batting on a score of 637 for eight at the end of Day Three, with Mark Craig batting on 34. Earlier during the Day Three of the New Zealand innings, Brendon McCullum scored a blistering 202 while Kane Willamson scored a brilliant 192 adding 297 runs for the second wicket. The visitors are trailing Pakistan’s by 286 runs.

McCullum began the day on a cautious approach, settling for the ones and twos until reaching the 180s, from where he decided to go back to his old ways. He brought up his double century in the 186th delivery that he faced, smashing Yasir Shah for a massive six over long-on. It was the McCullum’s fourth Test double-century. The knock was also the fourth fastest double-century of all time, the record of which is held by former New Zealand batsman Nathan Astle [222 balls]. 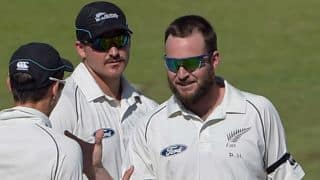