Catch live updates of the fourth day of the third Test between Pakistan and New Zealand here.

(Will Pakistan complete a 2-0 series victory, or can New Zealand produce a series levelling performance?)

Thats it from us at CricketCountry. Hope you enjoyed our coverage! Good bye!

While Pakistan were on top at the end of the first day, it was a Kiwi show from Day 2 onwards. The visitors displayed perfect team-work, excelling both with the bat and the ball. The win carries a lot of meaning to Brendon McCullum’s men, who have been emotionally charged since the tragic passing away of Australian cricketer Phillip Hughes, as well as the fact that this could be veteran spinner Daniel Vettori’s final Test. Vettori, who is the second most capped New Zealand player of all time, led the side in the post-match formalities, with his family present at the venue as well.

Pak 259 | Overs 63.3
Zulfiqar Babar 0 (2)
And New Zealand complete a victory in style! They manage to level the series and restoring a lot of confidence in the side. The fourth innings was dominated mostly by the Kiwis, though Asad Shafiq fought back with a defiant 137 off 148 balls that saw the formation of two 70-plus partnerships and frustrate New Zealand in the process. His knock only delayed the inevitable however, and once he departed, there was not much of a chance left for the Pakistanis.
OUT! Rahat Ali c McCullum b Craig 6 (42)
Pak 258/9 | Overs 62.2
Rahat Ali 5 (20)
Shafiq walks back to the pavilion after an entertaining innings that was worth 137 runs from 148 balls. End of a record 78-run stand for the ninth wicket. The Kiwis are one wicket away from victory now.
OUT! Asad Shafiq c Craig b Boult 137 (148)
Pak 227/8 | Overs 56
Asad Shafiq 106 (127), Rahat Ali 5 (20)
Shafiq brings up his fifth Test hundred in 123 deliveries. Shafiq’s hard-fought innings has helped keep Pakistan afloat in the match so far, and Shafiq will aim to bat till stumps today. Trent Boult is set to return to the attack any moment, and will look to complete a famous victory as well as complete 100 Test wickets.
Pak 180/8 | Overs 49
Asad Shafiq 65 (103), Rahat Ali 0 (1)
The move to get Daniel Vettori back into the attack has worked well for McCullum & co. as Pakistan lose their eighth wicket with 180 runs on the board. The hosts need another 159 runs if they are to avoid a defeat, though that result looks more likely given Pakistan’s tendency to lose wickets in a heap towards the end. End of a brief but useful 34-run partnership. Asad Shafiq is trying to push for a century from here.
OUT! Mohammad Talha lbw Vettori 19 (27)
Pak 167/7 | Overs 46
Asad Shafiq 62(97), Mohammad Talha 9(16)
Shafiq and Talha are batting with a bit of heart here. Pakistan aren’t going down without a fight. Talha isn’t afraid of going after the bowling, while Shafiq is showing his toughness by not letting his shoulders droop. Mark Craig continues to look threatening.
Pak 147/7 | Overs 42
Asad Shafiq 51 (87), Mohammad Talha 0 (2)
Sodhi takes two wickets inside an over, while conceding 10 runs. Yasir Shah comes to the crease, and wastes no time in attacking Sodhi. First ball is hit for a four, while the very next delivery is smashed for a six. Sodhi manages to have the last laugh though, when he traps Shah leg-before. And its tea on Day four at the end of the 42nd over.
OUT! Yasir Shah lbw Sodhi 10 (4)
Pak 136/6 | Overs 40.2
Asad Shafiq 50 (83), Yasir Shah 0 (0)
End of the quickfire 73-run partnership that helped restore some hope among the Pakistanis. Sodhi bowls outside off, and Sarfraz manages to get an edge to the slips. Taylor makes no mistake this time.
OUT! Sarfraz Ahmed c Taylor b Sodhi 37 (39)
Pak 136/5 | Overs 39.1
Asad Shafiq 50 (78), Sarfraz Ahmed 37 (37)
Mark Craig misses out on a catch at short fine-leg when Sarfraz attempts to sweep a delivery that was pitched outside off-stump. Sarfraz is dropped once again in the same over when Sarfraz edges a length delivery to the slips, where Ross Taylor surprisingly drops an apparently easy chance. Could these prove expensive for the Kiwis. Shafiq brings up his 11th Test fifty in the 40th over, guiding Pakistan to 136/5.
Pak 116/5 | Overs 34
Asad Shafiq 42 (66), Sarfraz Ahmed 25 (18)
The Shafiq-Sarfraz pair are on a rampage, perhaps taking a leaf out of New Zealand’s book. They have managed to add 53 runs in just 39 deliveries. The pair are the last hope for the Pakistanis, and are so far doing a brilliant job by throwing caution to the winds and playing in Twenty20 mode. Pakistan need 223 runs to avoid an innings defeat. Fifty runs have been scored in the last five overs, at a run-rate of ten per over. New Zealand, in the meantime, should get out of the comfort zone, and must focus on getting the much-needed breakthrough.
Pak 93/5 | Overs 32
Asad Shafiq 23 (55), Sarfraz Ahmed 21 (17)
Sarfraz goes on the offensive against the rampaging Kiwis, collecting 15 runs off the 30th over, courtesy three boundaries. Sarfraz and Shafiq add another boundary each, as the pair is looking give the Kiwis some rough treatment. Pakistan are nearing the 100-run mark at the moment.
Pak 63/5 | Overs 27.3
Asad Shafiq 14 (45)
And its the skipper who has to take the long walk back to the pavilion now, as he departs for 12 from 57 balls. The skipper tries to defend a a Craig delivery, but gets a faint inside-edge into his pad, from where the ball deflects towards the slip region. Walting follows his instinct and takes a great dive catch. Half the Pakistan side now back in the pavilion, with Shafiq and Sarfraz Ahmed being the last recognised pair of batsmen at the crease. This should have been the sixth wicket though, as Asad Shafiq survived a dismissal scare courtesy a howler by the umpire, when he got a faint edge to the keeper off the bowling of Mark Craig, but the New Zealand appeal was turned down by the umpire. Both teams out of reviews by now.
OUT! Misbah-ul-Haq c Watling b Craig 12 (57)
Pak 55/4 | Overs 23
Misbah-ul-Haq 12 (42), Asad Shafiq 8 (33)
McCullum has decided to replace Vettori with Southee to go for a pace-spin combo, with Mark Craig bowling from the other end. New Zealand will look to maintain the pressure on the hosts, and keep the fall of wickets happening

Craig’s 7-wkt haul and 50+ score in a Test is the 22nd such occasion in Tests. Botham is the only one to do more than once, thrice! #PakvsNZ

In this test match.. Hafeez c & b Craig Craig c & b Hafeez #PakvsNZ

Pak 36/4 | Overs 14
Misbah-ul-Haq 1 (21), Asad Shafiq 0 (0)
Pakistan find themselves in further strife having lost Mohammad Hafeez moments into the post lunch session. Mark Craig got off the mark on the wickets column as Hafeez presented a simple return catch, which the off spinner gobbled up leaving Pakistan in complete disarray.
OUT! Mohammad Hafeez c & b Mark Craig 24 (41)

Lunch on day four. After posting a record 690 and lead of 339, the BLACKCAPS have reduced Pakistan to 30-3. Good session that #pakvnz ^CE

Pak 30/3 | Overs 12
Mohammad Hafeez 18 (35), Misbah-ul-Haq 1 (15)
And its lunch on Day Four, with Pakistan reaching a score of 30 for the loss of three wickets. Pakistan face an extreme task if they are to save themselves from an innings defeat, and save the match and the series. Trent Boult has been remarkable in the innings so far, taking three wickets for 15 runs in six overs, while Mark Craig has been introduced into the attack early in the innings.
Pak 24/3 | Overs 8.1
Mohammad Hafeez 13 (27), Misbah-ul-Haq 0 (0)
The New Zealand bowlers are on fire at the moment, with Boult dismissing Younis Khan for a golden duck for leave the Pakistanis tottering at a score of 24 for three. Boult bowls an inswinger, which traps Younis on his pad and would have apparently kissed the bails. Younis nearly lost his balance while trying to play across the line. The Pakistanis decide to go for the review, and the decision of awarding the wicket to the bowler is upheld.
OUT! Younis Khan lbw Boult 0 (1)
Pak 20/2 | Overs 7
Mohammad Hafeez 9 (21), Younis Khan 0 (0)
Massive lack of judgement by Azhar Ali, as he leaves an inswinger that crashes onto his off-stump, causing Pakistan to lose their second wicket of the second innings with just 20 runs on the board so far. Terrible start for the Pakistanis, who are currently trailing by 319 runs. Azhar Ali fails with the bat once again.
OUT! Azhar Ali b Boult 6 (16)
Pak 15/1 | Overs 3
Mohammad Hafeez 9 (9), Azhar Ali 2 (4)
Pakistan are handed their first blow by New Zealand at an early stage of their innings, when Shan Masood edges a good-length Trent Boult delivery towards the slips, where Tim Southee takes a quick-reflex catch. Masood continues his disappointing form with the bat and departs for four runs from five balls. Azhar Ali walks in to bat next, and proceeds to get off the mark straight away.
OUT! Shan Masood c Southee b Boult 4 (5)
NZ 690 | Overs 143.1
Trent Boult 0 (4)
The New Zealand run-fest finally comes to an end, with Younis Khan taking his third catch of the innings at the slips, off the bowling of Yasir Shah to dismiss Sodhi on 22. The Kiwi lead is a massive 339, with at least six batsmen scoring over fifty.
OUT! Ish Sodhi c Younis b Yasir 22 (43)

NZ 682/9 | Overs 141
Ish Sodhi 4 (17), Trent Boult 0 (0)
Soft dismissal as Mark Craig simply comes forward and pushes a Hafeez delivery back to the bowler, letting a simple catch take place. End of the 45-run partnership as Craig departs after a valuable knock of 65 from 85 balls. New Zealand has also surpassed their highest Test total of all time when they reached the score of 681. The lead in the meantime has extended to 331.
OUT! Mark Craig c & b Hafeez 65 (85)
NZ 658/8 | Overs 136
Mark Craig 51 (72), Ish Sodhi 4 (17)
Mark Craig is the sixth batsman in the New Zealand batting line-up to cross the fifty-run mark, bringing up his second Test fifty with a huge six off the bowling of Yasir Shah. That is the 20th six of the innings so far. New Zealand’s lead in the match has crossed 300 so far, though the Kiwis are in no mood to declare at the moment. A couple of records are on their way right now, with New Zealand likely to surpass their highest Test score of 681 soon.

Hello and welcome to CricketCountry’s coverage of Day Four of the third Test match between Pakistan and New Zealand at Sharjah. I am Amit Banerjee, and I will be bringing you the live updates of the match.

New Zealand finished Day Three at 637 for eight with Mark Craig unbeaten on 34 and Tim Southee getting dismissed off the last ball of the day,, bowed by Yasir Shah. The visitors managed to gain a massive lead of 286 runs at the end of the day, emerging as the dominant side for the second consecutive day. Rahat Ali emerged the pick of the Pakistan bowlers, finishing with figures of four for 89.

Brendon McCullum resumed the day having crossed 150 on Day Two. He brought up his double century by smashing Yasir Shah for a massive six over long-on, but his celebrations had barely died before he was dismissed by Yasir attempting to sweep a delivery that was pitched on full-length outside the leg stump, as the ball underwent a massive spin to crash into the stumps. The Pakistani players showed some sportsmanship by congratulating McCullum, who faced a standing ovation from his team-mates and the spectators alike on his way back to the pavilion.

Kane Williamson reached the 150-run mark off 205 balls at the start of the second session, with Ross Taylor scoring steadily on the other end. The first few overs post-lunch were bowled by the duo of Zulfiqar Babar and  Yasir, conceding 23 runs off the next ten overs. It was after Pakistan skipper Misbah-ul-Haq brought in Mohammad Talha and Rahat Ali that the run-rate picked up. Williamson managed to eclipse his unbeaten knock of 161 against West Indies earlier this year to notch up his highest Test score. 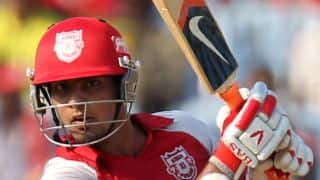 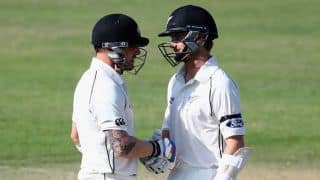