Welcome to CricketCountry’s live cricket blog for the third day’s play between West Indies and Pakistan, being played at Roseau in Dominica.

Hello, good evening if you are in Pakistan or India, and good morning if you are based out of the Caribbean. Welcome to CricketCountry’s live cricket blog for the third day’s play between West Indies and Pakistan, being played at Roseau in Dominica. This is Pramod Ananth, and I will be bringing you the live cricket scores and updates of the third day’s play. West Indies will resume their first innings at 14 for no loss, trailing by another 362 runs in the first innings of this rain-affected Test. A lot of time has been washed out by rains, and Pakistan will feel some pressure going into the third day of the series decider. FULL CRICKET SCORECARD: West Indies vs Pakistan, 3rd Test Day 3

Pakistan will be eager to give a farewell to Misbah-ul-Haq and Younis Khan, who are all set to bid adieu to Test cricket after this contest. In order to make that happen, Pakistan have done well to put up a strong first-innings total on the board. However, a determined start by West Indies to the third Test had somehow thwarted the Pakistani threat and the visiting side will have to get their act together and come hard on West Indies in order to make early inroads on Day Three.

Pakistan were bowled out for a formidable total of 376 in their first innings. Azhar Ali scored a fabulous 127, and joined the list of those batsmen who have scored more than one century in a Test series in the Caribbean. Three more batsmen from Pakistan were among runs; Babar Azam scored 55, Misbah scored 59 and Sarfraz Ahmed made 51.

For the home side, the pick among the bowlers was Roston Chase, who had to work extremely hard for his wickets. Chase returned with the figures of 32-5-103-4. On the other hand, West Indies captain Jason Holder claimed 3 for 71 off his 32 overs whereas Devendra Bishoo snaffled 2 for 61 off his 23.3 overs. ICC Champions Trophy 2017: Chris Lynn would never knock back the opportunity to open 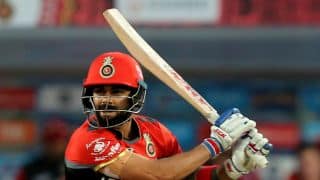