The match is being played at the scenic Sawai Mansingh Stadium in Jaipur and it is the home ground for the Rajasthan team.

Hello and welcome to CricketCountry’s coverage of the Group A match between defending champions of Ranji Trophy 2015-16, Karnataka, and Rajasthan. The match is being played at the scenic Sawai Mansingh Stadium in Jaipur and it is the home ground for the Rajasthan team. Both the teams have won the Ranji Trophy in recent years. Karnataka have won two in a row in 2013-14 and 2014-15, whereas Rajasthan had won consecutive trophies in 2010-11 and 2011-12. But, if their performances this season are anything to go by, then both the teams cannot be ranked very high. Both Rajasthan and Karnataka would look to bring their A game forward in an expectedly high-intensity clash. Also Read: Live Cricket Score Rajasthan vs Karnataka, Ranji Trophy 2015-16 Group A match, Day 3 at Jaipur.

In the last hour’s play on Day 3, Rajasthan have lost three quick wickets and are precariously placed at 3 for 42 at stumps. They still require 316 runs, which seems to be a herculean task for them. On the other hand, defending champions Karnataka need just seven more wickets for a straight win and six points.

In Rajasthan’s second innings, Karnataka’s pacers have taken all the wickets to fall so far. This is just like the first innings, where nine out of 10 wickets were taken by pacers while one batsman was run out. Sreenath Arvind started the carnage when he got the opener Saxena caught behind the wickets. Soon AV Deshpande too fell without scoring, again to Arvind.

Rajasthan skipper Ashok Menaria was the last man to be dismissed on Day 3 when he was cleaned-up by youngster David Mathias. Opener PI Sharma and night-watchman TM Ul Haq will start Day 4 for Rajasthan.

Live cricket scores Rajasthan 265 & 242 |  Karnataka 281 & 318/5 Dec | Overs 79 | Batting: D Yagnik 67(114), AB Singh 11(39): Defending champions Karnataka have completed their victory formalities as their spinners finally joined the party and wiped the tail. They have won the match by a margin of 92 runs and gained six vital points in the process. This is Karnataka’s first outright win in this season. After a mediocre batting display in the first innings, they came hard at Rajasthan and didn’t allow them to take lead.

In the second innings, riding high on Robin Uthappa’s monstrous knock of 128-ball 165, the team posted 300 on the board in no time. Rajasthan could do little in the second innings too. Their only bright spots were opener Pranay Sharma, who scored a 100 and D Yagnik, who lost out of partners and  remained stranded on 71. This is all from here. Ciao!

Live cricket scores Rajasthan 254/8 & 242 |  Karnataka 281 & 318/5 Dec | Overs 79 | Batting: D Yagnik 67(114), AB Singh 11(39): A stubborn display of batting by Yagnik is keeping victory at bay for Karnataka. He is playing a determined knock of unbeaten 67. Giving him company is  AB Singh, who’s playing on 11. If we look at the equation, Rajasthan need 104 more runs to win whereas Karnataka are just two wickets away from win. Rajasthan fans would be hoping against hope that Yagnik turns out to be their hero today and wins it for his side.

Live cricket scores Rajasthan 224/7 & 242 |  Karnataka 281 & 318/5 Dec | Overs 67 | Batting: D Yagnik 53(84), DL Chahar 8(9): Rajasthan are fighting hard at the moment, but it seems unlikely that they would be able to avoid their defeat in this match. Their only hope in Pranay Sharma has gone now. The young opener, who scored his second First-Class century today, was finally dismissed by David Mathias. Sharma scored 114. With his dismissal, the door of the tail has opened up. Wicketkeeper Yagnik is still holding the fort with a fluent unbeaten half-century. But how long will he be able to do that will be interesting to see.

Live cricket scores Rajasthan 167/6 & 242 |  Karnataka 281 & 318/5 Dec | Overs 50 | Batting: PI Sharma 96(147), D Yagnik 23(32): Rajasthan are only delaying the inevitable here. They go at lunch on a score that reads 6 for 167, needing another 191 runs to win. Opener PI Sharma is still out there on 96 and moving towards second First-Class hundred of his career. Giving him company is gritty wicket-keeper batsman D Yagnik, who’s unbeaten on 23. Stuart Binny and Sreenath Arvind have chipped-in with two wickets each so far for Karnataka. Young pacer David Mathias has got one while spinner Shreyas Gopal picked the first wicket by a Karnataka spinner in the game when he removed Rajat Bhatia.

Live cricket scores Rajasthan 158/6 & 242 |  Karnataka 281 & 318/5 Dec | Overs 48 | Batting: PI Sharma 90(142), D Yagnik 20(27): Karnataka are on the verge of registering yet another win in their Ranji Trophy campaign. They’re now 6 down for 158 and need another 200 runs. Their opener PI Sharma has played a lone hand so far, as he’s unbeaten on 90 so far and is moving towards his hundred. But the gritty opener has lacked support from the other end as the wickets have fallen at regular intervals.

Live cricket scores Rajasthan 94/3 & 242 |  Karnataka 281 & 318/5 Dec | Overs 33 | Batting: PI Sharma 57(96), TM Ul Haq 19(78): Rajasthan are fighting hard on Day 4. Chasing 358, they ended Day 3 on three for 42. They’ve added 52 more runs today so far. Opener PI Sharma has reached to his fifty while the night-watchman TM Ul Haq is also punching above his weight. Both are looking to spend as much time as possible in the middle so that the loss can be avoided. Karnataka bowlers too are fighting hard to take wickets and win this game. 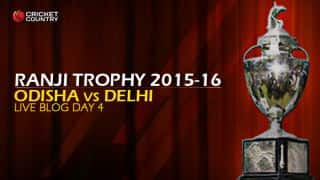 Video: Arshi Khan reacts to Pakistan clergy’s issue of fatwa on her for stating she had sex with Shahid Afridi