Shardul Thakur once again struck early to leave Delhi in tatters at 110 for four in their 440-run chase on Day Four.

Hello and welcome to CricketCountry‘s live blog of the fifth day of the Ranji Trophy 2014-15 quarter-finals.

In the other quarter-final match, Maharashtra sailed into the semifinals of Ranji Trophy 2014-15 after their bowlers delivered the goods to defeat Andhra by 75 runs in a quarterfinal match after they showed an all-rounde performance.

Chasing 176 on the third day of the match, Andhra were folded up for 101, with Anupam Sanklecha being the most successful bowler with figures of four for 19 at the Bansi Lal Stadium. Sanklecha was well-supported by Samad Fallah (2 for 33), Domnic Joseph (2 for 26) and Shrikant Mundhe (2 for 17). Earlier, Kedar Jadhav, overnight on 81, was dismissed on the score in the morning, but his innings paved the way for Maharashtra to have a total to defend, reported PTI.

Karnataka vs Mumbai at Bengaluru on February 25

Tamil Nadu vs Maharashtra at Kolkata on February 25 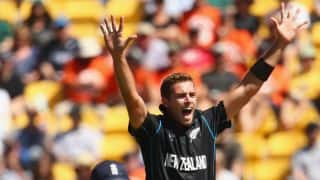