Karnataka played themselves into a position of strength by making 247 for four in their second essay.

(The first round of Ranji Trophy 2014-15 has started from Sunday. Catch live updates of Day 3 of all matches here)

Andhra are 215 for two against Hyderabad, Match Drawn

Himachal Pradesh beat Services by an innings and 29 runs

Hello and welcome to CricketCountry’s live coverage of the third day’s play in the first round matches of the Ranji Trophy 2014-15.

In Bengaluru, fast bowlers Sreenath Aravind (4/9) and R. Vinay Kumar (3/20) decimated the opposition as Tamil Nadu were all out for a mere 82 in the 35th over. Karnataka won by 285 runs and Aravind, not surprisingly, won the player of the match award.
Earlier Jammu and Kashmir had beaten Mumbai by four wickets, with Shubnam Khajuria once again top scoring with 78.

In Patiala, Yuvraj Singh struck a brisk ton (130) and Sandeep Sharma took three early wickets to put Haryana in trouble, after setting them a target of 321 with a day to go. In Vadodara, Bengal lead by 109 runs against Baroda while in Visakhapatnam, Andhra Pradesh trail by 129 runs.

At Guwahati, Assam defeated Tripura by 10 wickets with medium pacer Krishna Das destroying Tripura claiming seven wickets for 50 runs while Saurashtra trailed hosts Delhi by 62 runs after getting bowled out for 217 in reply to Delhi’s 442. 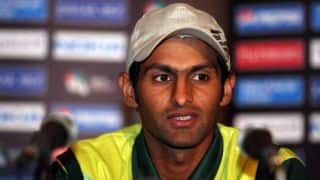