(The third round of Ranji Trophy 2014-15 commences on Sunday. Catch the live updates of Day 1 of all matches here)

Uttar Pradesh vs Mumbai at Kanpur

Openers Mukul Dagar and Tanmay Srivastava have done well to not lose a wicket this far. Mumbai bowlers have lacked penetration, but not much can be said at this point.

Uttar Pradesh reached a score of 115 for the loss of one wicket at stumps on Day 1, with Tanmay Srivastava and Prashant Gupta unbeaten on scores of 49 and 41 respectively. The partnership between the two batsmen at the crease is worth 87 runs, the prevalance of the two tomorrow should see UP post a major total. Mumbai in the meantime need their bowlers to pull their socks up and fire.

Delhi vs Rajasthan at Delhi

Delhi bowlers have made good use of the new ball, taking three wickets. Sumit Narwal, Navdeep Saini and Rajat Bhatia have taken one wicket each.

Apart from RK Bishnoi Sr currently batting on 51, all batsmen have crumbled.

Rajasthan were bowled out for a paltry total of 141 in 64.1 overs, with Parvinder Awana emerging the pick among the bowlers for Delhi with figures of four for 15. Navdeep Saini’s figures of three for 31 too helped skittle the Rajasthanis out. Delhi were batting on a score of 10 for the loss of one wicket after four overs at stumps.

KS Bharat has scored 21 and Suraj Yadav has taken a wicket.

KS Bharat lost his wicket to Raushan Raj on 47.

Andhra Pradesh reached a score of 160 for three at stumps on Day 1, with AG Pradeep and Avadhanam Rakesh batting on scores of 47 and 15 respectively. Pradeep hit six boundaries during his stay at the crease. Saurabh Kumar was the leading bowler for Services after conceding a mere 19 runs from the 11 overs he bowled, dismissing Gonnabattula Chiranjeevi during his spell.

Karnataka vs Railways at New Delhi

After a delayed start due to fog, Karnataka are off to a flier, mostly on the back of Robin Uthappa who has whacked 33 runs of 36 balls. Mayank Agarwal at the other end is expressing caution with just 6 runs of 31 balls.

Mayank Agarwal who was struggling since the time he came out to bat lost his wicket to KK Upadhyay. Robin Uthappa, now on 40 has slowed down a little bit and is looking very good. Kunal Kappor has joined him at the crease.

Karnataka have squandered a fine start to find themselves at 166/6. KK Upadhyay has been the pick of bowlers with three wickets.

Karnataka reached a score of 207 for seven at stumps on Day 1. Chidambaram Gautam and Shreyas Gopal are batting on scores of 31 and 14 respectively.

The MP batsmen believe in being slow but steady. They have scored 29 for no loss but at a run rate of just 1.81 after 16 overs. The bowlers have done well to keep them tied down and they could be rewarded with a wicket any moment.

Opener Jalaj Saxena has done well to see the new ball off, with a well-paced 69 off 105 balls. He was joined by Harpreet Singh, who has been the aggressor with 48 off 55 deliveries. The TN bowlers have managed the solitary wicket of Sanjay Mishra, credits to Rahil Shah.

Jalaj Saxena has scored a brilliant 118*.

Madhya Pradesh finished at 250 for four at stumps on the opening day of the third round of the ongoing Ranji Trophy. Jalaj Saxena is unbeaten on 120 as he looks to guide his side to a total in excess of the 400-run mark on the second day. Devendra Bundela is batting on the other end on 21.

Kerala vs Hyderabad at Wayanad

Hyderabad have stumbled to 59 for 3, thanks to some great bowling by Kerala. P U Anthaf has been the pick of bowlers with 2 wickets conceding just 4 runs in 6 overs.

Ibrahim Khaleel and Ashish Reddy were batting on scores 35 and 34 as Hyderabad reached a score of 225 for seven at the end of day’s play.

Goa vs Himachal at Margao

Goa have lost the second wicket and will now have to work up a good partnership or they could crumble. 3 of the top 4 are now in the hut. Himachal bowlers have done everything correct this morning.

Goa seems to be in deep trouble with all top 5 batsmen out. The HP bowlers have reaped rewards of some great bowling. V R Malik is the leading wicket-taker with 2 wickets. RR Dhawan, Raghav Dhawan and G K Singh have pocketed one wicket each.

Darshan Misal has scored a crucial 73 to rescue Goa from a potentially humiliating performance.

Goa reached a score of 274 for seven, with Darshan Misal batting on a score of 89, at the end of day’s play.

Saurashtra vs Gujarat at Rajkot

Opener Sagar Jogiyani has looked steady but has witnessed two wickets fall at the other end. He will look to muster a partnership with Sheldon Jackson. KD Patel and Axar Patel have taken a wicket each.

Sheldon Jackson (37) and Jaydev Shah (22) are looking to build a partnership to rescue Saurashtra from a dicey position after the top 3 batsman have got out. Axar Patel has taken 2 wickets for Gujarat.

Saurashtra are 2 wickets away from folding up. Axar Patel has bagged 4 wickets and must have his eye on the fifer.

Saurashtra were bowled out for a score of 207. Patel remained the top wicket-taker for Gujarat with figures of four for 72. Gujarat were three for no loss at the end of day’s play.

Maharashtra vs Punjab at Pune

After two early jolts, Maharashtra batsmen Vijay Zol and KM Jadhav are laying the foundation for a big partnership. Siddhart Kaul has been the pick of bowlers for Punjab and has bagged  both the wickets.

The Punjab bowlers have asked questions and the scoreboard reveals the Maharashtra batsman have had no answers. Siddharth Kaul and Maninder have taken 2 wickets each.

RA Tripathi’s 56 saved maharashtra some face as they were reeling at 100/5 at one point.

Maharashtra were bowled out for a score of 210, with Rahul Tripathi scoring a half-century before getting dismissed off the bowling of Yuvraj Singh. Siddarth Kaul recorded figures of three for 46.

Punjab reached a score of 26 for one in reply at stumps on Day 1.

Baroda vs J&K at Vadodra

J&K batsmen seem to be in full flow, with the Mumbai win still fresh in their minds. Shubham Khujaria and Adil Reshi have looked solid and not given the fielding side a chance.

Shubham Khujaria is out after scoring a good looking 41. Adil Reshi is looking in fine form with a fluent 46 not out. He has been joined by Bandeep Singh who has scored 1 off 14 balls. Swapnil K Singh is the sole wicket-taker.

Jammu and Kashmir were 266 for the loss of six wickets at stumps on Day 1. Skipper Parvez Rasool was batting on a score of 65 from 105 balls. Swapnil Singh was the leading wicket-taker for Baroda with figures of four for 92.

Jharkhand vs Tripura at Dhanbad

Jharkhand are off to a disastrous start. The Tripura bowlers have done well to rattle the top order with the top four batsmen now in the hut. Mura Singh and Rana Dutta have shared the spoils with two wickets each.

Jharkhand got blown apart for 142 thanks to a fifer from Rana Dutta.

Tripura reached a score of 72 for the loss of two wickets at stumps. Bishal Ghosh and Rakesh Solanki were batting on scores of 25 and 40 respectively.

Hello and welcome to CricketCountry’s live coverage of the first day’s play in the third round matches of the Ranji Trophy 2014-15.

Railways will have to dig deep to stop the onslaught of defending champions Karnataka in their home Ranji Trophy cricket tie beginning at the Karnail Singh Stadium on Sunday.

Karnataka have continued their imperious form of last season with comprehensive victories over Tamil Nadu and Bengal in Group A.

Railways go into the contest, having taken three points each from their draws against Madhya Pradesh and Mumbai at home. Their faster bowlers fired on both occasions, helping the team get the crucial first innings lead.

They will be expecting a lot from opening bowling combination of Anureet Singh and Krishnakant Upadhyay, who posed serious problems for the batsmen in the first two matches sharing 21 wickets among each other, reported PTI. 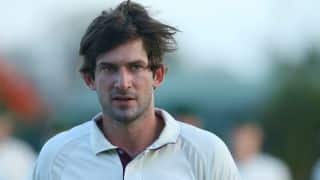