Today will be the third day as the teams continue to battle in order to consolidate their position.

Hello and welcome to CricketCountry’s live blog of the Ranji Trophy 2014-15 Round Three matches. Today will be the third day as the teams continue to battle in order to consolidate their position.

Here are the Score Updates at Stumps on Day 3:

Tripura is looking for victory.

Mumbai lower order saved the day for them. At one point of time Mumbai were 84/6.

MP look to be in command in their game against TN. After putting up a good first innings score, MP have managed to force follow on.

Yuvraj got out for 136 off 160 balls. He was well supported by Gurkeerat Mann who made 57. Kedar Jadhav is batting well for Maharashtra in second innings.

Delhi are in comfortable position against Rajasthan. Virender Sehwag made 64.

Hyderabad have reached 270 at the end of their First innings. In reply Kerala put up a huge 447/7 in their first innings, Sachin Baby scored a century.

Andhra made 234 in their first innings, in reply Services scored 218/4.

Good to see many outright victories in ranji matches. Good start to K’taka season with 2 out of 2. Well done @Vinay_Kumar_R #RanjiTrophy

According to IANS, medium pacer Shardul Thakur took six wickets to help Mumbai bowl out Uttar Pradesh for 206 in their first innings on the second day of the Ranji Trophy match at the Green Park stadium in Kanpur Monday while Yuvraj Singh’s 136 lifted Punjab to 370 for eight against Maharashtra in Pune.

Uttar Pradesh had Sunday scored 115 for one but managed to add only 91 runs as right-armer Shardul demolished the hosts’ top-order. He made most of the early morning conditions and removed overnight batsman Prashant Gupta (41) in the first delivery of the day. He continued his assault and dismissed Umnag Sharma (0) and other overnight batsman Tanmay Srivastava (67) as the batsmen guided moving deliveries to wicketkeeper Aditya Tare.

Kshemal Waigankar supported Shardul well, picking up two wickets of Piyush Chawla (11) and Praveen Kumar (4). At the stumps, Mumbai also were in a spot of bother as medium pacer Amit Mishra removed openers Sushant Marathe (3) and Braviush Shettry (7) early before Ankit Rajpoot dealth another blow to the visitors by dismissing seasoned Abhishek Nayar (9). Mumbai are trailing by 164 runs.

At the Maharashtra Cricket Association Stadium in Pune, veteran all-rounder Yuvraj hit 25 fours and a six to put Punjab in a commanding position. After his team was reeling at 54/3, he forged a 112-run partnership for the fourth wicket with opener Jiwanjot Singh (68) and later stitched another 112-run stand with Gurkeerat Singh (57). Gitansh Khera (37) and skipper Harbhajan Singh (31) also came up with useful contributions.

At the Ferozeshah Kotla here, Delhi rode on good scores by Unmukt Chand (batting 87) and Virender Sehwag (64) to reach 201 for three against Rajasthan. At the close of play, Unmukt and Mithun Manhas (batting 34) were at the crease. 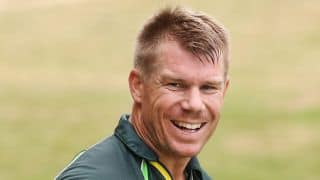