Catch the live scores and updates of the third day of the fourth round of Ranji Trophy 2014-15.

(The fourth round of Ranji Trophy 2014-15 has commenced. Catch the live updates of Day 2 of all matches here)

Scores at Stumps on Day 2:

Hello and welcome to CricketCountry’s coverage of the third day of the fourth round of Ranji Trophy 2014-15. At stumps on Day Two, Group A saw Bengal wobbling at a score of 130 for the loss of six wickets, trailing Mumbai‘s hard-fought total of 414 by 284 runs. Shardul Thakur led blitzkrieg on the Bengal batsmen, collecting five wickets while conceding 37 runs. Shreyas Iyer had earlier top-scored for Mumbai with a knock of 153. In the second game at Gwalior, Madhya Pradesh dismissed Baroda for a score of 358, with Saurabh Wakaskar missing out on a century by six runs.

In Group B, Delhi were on top during their encounter against Gujarat, with Unmukt Chand and Virender Sehwag putting up identical scores of 105 to guide their side to 425 for six, before skipper Gautam Gambhir decided to declare the innings. Gujarat were 34 for one at stumps, trailing by 391 runs. Odisha were leading Haryana by 105 runs runs after reaching a score of 232 for nine, having dismissed Haryana for a paltry 127 earlier in the game. Jayant Yadav was the standout bowler for Haryana, taking six wickets for 91 runs.

Vidarbha were bundled out for 296 in their encounter against Rajasthan, but managed to end the day on a high and a substantial lead as they bowled their opponents out for a sub-par total of 188. Ravikumar Thakur was the ‘destroyer-in-chief’ of the Rajasthan innings as he took five wickets for 50 runs. The fourth game of the group saw Punjab dominate Saurashtra with the bat as they declared on a mammoth score of 659 for seven, with Mandeep Singh (235), Yuvraj Singh (182) and Gurkeerat Singh (101) scoring centuries for Punjab. Saurashtra played 10 overs, adding 27 runs to their tally at stumps.

In Group C, Hyderabad were going strong at a score of 210 for three, trailing Services by 96 runs after having dismissed the opposition for 306. Deepak Punia and Soumik Chatterjee top-scored for Services with identical knocks of 70. Hanuman Vihari led the counter-attack for Hyderabad with a fluent unbeaten 114 from 214 balls. Jharkhand were dismissed for 337, but ended the day with a positive prospect as they reduced Kerala to 179 for five. Himachal Pradesh were all over Assam as they declared on a score of 549 for the loss of four wickets. Paras Dogra and Ankush Bains top-scored for Himachal with scores of 230 and 156 respectively. 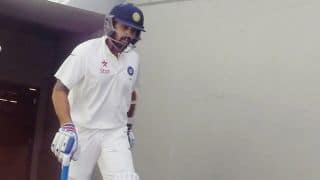