Gujarat are struggling on 152 for the loss of seven.

(The fourth round of Ranji Trophy 2014-15 has commenced. Catch the live updates of Day 4 of all matches here)

Hello and welcome to CricketCountry’s coverage of the third day of the fourth round of Ranji Trophy 2014-15. At stumps of Day 3, in Group A action, Bengal were strongly placed 129 for no loss after follow-on as they were dismissed for 210 in the first innings following a strong first innings score of 414 by Mumbai. While at Gwalior, Madhya Pradesh are struggling on 97 for six after suffering a follow-on as they were dismissed for 176 following Baroda’s strong innings of 358. Tamil Nadu finished on 213 in the first innings while Railways were struggling on 133 for the loss of six. While at Kanpur, Uttar Pradesh finished the day on 267 for the loss of five. 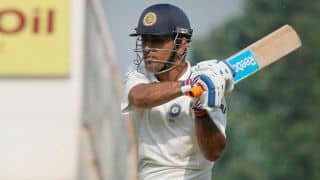