Catch the live updates of the ongoing edition of India's premier domestic tournament.

Hello and welcome to CricketCountry’s coverage of the opening day Round Six of the ongoing edition of the Ranji Trophy. We will be bringing you the live updates from all 12 matches across three groups.

Score Updates at the end of Day 1 of Round 6

Bengal vs Jammu and Kashmir at Kolkata

Wriddhiman Saha scored and excellent hundred on a turning track

Madhya Pradesh vs Karnataka at Indore

Railways vs Baroda at Delhi

Delhi vs Odisha at Delhi

Gujarat vs Punjab at Ahmedabad

Maharashtra vs Rajasthan at Pune

Vidarbha vs Saurashtra at Nagpur

Andhra Pradesh vs Tripura at Ongole

Himachal Pradesh vs Jharkhand at Dharamsala

Hyderabad vs Assam at Hyderabad

Services vs Goa at Delhi

Saha returns and gets a 100 #RanjiTrophy

In Group A, Bengal look to catch up with group toppers Karnataka, who are undefeated in the tournament so far, as they are yet to win an encounter so far. Karnataka face Madhya Pradesh in an away encounter.

Virender Sehwag will be looking to continue his impeccable form in the tournament so far as Delhi take on Odisha in their Group B encounter in the former’s backyard. Sehwag has scored a century each in his last two matches. A similar sentiment will be shared by Yuvraj Singh, who missed out on a World Cup squad after BCCI’s announcement recently, will look to impress with the bat once again as Punjab take on Gujarat. 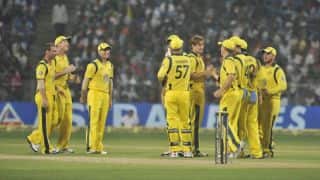