Catch live updates from the fourth day of the Round 6 of Ranji Trophy 2014-15 season here.

The other matches in the Round 6 of Ranji Trophy 2014-15 are Himachal Pradesh versus Jharkhand, Assam versus Hyderabad, Services versus Goa and Andhra Pradesh vs Tripura.

According to IANS, Firing on all cylinders, four big guns – Andhra Pradesh, Delhi, Maharastra and Tamil Nadu – won their Ranji trophy engagements inside three days Thursday.  Manan Sharma spun Delhi to an innings and 150 run victory with a six-wicket haul giving away just 24 while Vikas Tokas and Shivam Sharma equally shared the remaining four wickets, as Odisha were skittled out for 85.

Beginning their first innings at the overnight score of 25 for one, Odisha failed to tackle left-arm spinner Varun Sood and medium pacer Navdeep Saini – who picked up three wickets each – to be bowled out for a pathetic 118. Sharma then bowled with guile to wreck the Odisha second innings and enable Delhi clinch the one-sided game. At Ongole, Andhra pacer D. Siva Kumar finished with a career-best haul of 11 wickets as he bowled his side to an innings win over Tripura.

Resuming their second essay at the overnight total of 13 for three, Tripura failed to do much of a recovery act and were all out for 151. Kumar bagged four for 54, while C.V. Stephen chipped in with three, and D.P. Vijay Kumar picked up two scalps. Tripura’s only resistance came in the form of middle order bat Nirupam Sen Chowdhury who scored 42 runs.

Rajasthan were in for a surprise in Pune against Maharastra as they found all-rounder Shrikant Mundhe at his best with the ball. The medium fast bowler picked up figures of six for 38 and bundled Rajasthan for a paltry 106. Maharastra then went out and chased down the target of 103 runs losing only one wicket in 19.3 overs, courtesy a blistering half-ton from Swapnil Gugale. Rajasthan were greeted with Mundhe’s pace and swing. None could make a healthy contribution, with the highest being 19 runs from Aristh Singhvi. At Chennai, Malolan Rangarajan and Suresh Kumar picked up figures of five for 42 and four for 38 respectively to bowl Uttar Pradesh out for 169 in their second innings and hand Tamil Nadu a victory by an innings and 49 runs.

Here are the scores of these ongoing matches:

Bengal vs Jammu and Kashmir at Kolkata: MATCH DRAWN. BENGAL ARE AWARDED THREE POINTS DUE TO THEIR FIRST INNINGS LEAD.

Madhya Pradesh vs Karnataka at Indore: MATCH DRAWN. KARNATAKA EARN THREE POINTS ON THE BASIS OF THEIR FIRST INNINGS LEAD.

Railways vs Baroda at Delhi: Baroda have recovered from early blows to reach 195 for three in their second innings. They scored 298 in their first innings and Railways replied with 263.

Delhi vs Odisha at Delhi: DELHI WON BY INNINGS AND 150 RUNS.

Maharashtra vs Rajasthan at Pune: MAHARASHTRA WON BY 9 WICKETS.

Andhra Pradesh vs Tripura at Ongole: ANDHRA WON BY INNINGS AND 8 RUNS.

Hyderabad vs Assam at Hyderabad: ASSAM WON BY AN INNINGS AND 56 RUNS. 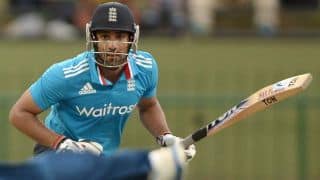