Hello and welcome to CricketCountry’s live blog of the second day’s play in the Round 7 of the Ranji Trophy 2014-15. We will be bringing all the updates from all 12 Ranji Trophy matches of this round. In this round, Uttar Pradesh is hosting Bengal in a battle of struggling two teams beginning at the Mohan Meakin ground at Ghaziabad, PTI reported. READ: The new Virat of Indian Cricket

A rampant Karnataka, strengthened by the return of Test batsman Lokesh Rahul, are taking on Baroda at Mysore. The hosts currently lead Group A table with 28 points. With four wins and a draw in the previous five matches, Karnataka, with their pronounced seam-centric bowling, have looked their part as the defending champions and Baroda, who are on 15 points after five matches, have not exactly set the turf on fire despite the presence of India discards, the Pathan brothers Irfan and Yusuf. READ: Ishank Jaggi’s exclusive interview

Team India speedster Varun Aaron has been included in the 15-member Jharkhand team that will play against Hyderabad in the Ranji Trophy Group C league match at JSCA International cricket stadium. While Mumbai will take on Tamil Nadu at Chennai. READ: Punjab captain Mandeep Singh talks with CricketCountry

1. Haryana‘s Jayant Yadav bagged seven wickets to bundle out Saurashtra for 238 on the opening day’s play.

2. Young left-hander Sudip Chatterjee scored a patient half century after a painstaking start by opener Arindam Das as Bengal crawled to 141 for four in 57 overs against Uttar Pradesh.

3. Vineet Saxena (87) and Chetan Bist (51) saved the day for Rajasthan by striking fighting unbeaten half-centuries as the visitors ended the day one at 191 for five against Odisha.

4. Saurabh Tiwary struck a hundred as Jharkhand posted an impressive 295 for four in their first innings on the opening day.

5. Rahil Shah of Tamil Nadu ripped through the Mumbai’s batting line-up with a seven-wicket haul.

6. Deepak Hooda hit a strokeful century to lift Baroda from a precarious position and end the opening day on 320 for eight against table-toppers Karnataka.

Score Updates at Lunch on Day 2

Uttar Pradesh vs Bengal at Mohan Meakin ground at Ghaziabad

Karnataka vs Baroda at Mysore

Tamil Nadu vs Mumbai at Chennai

Jammu & Kashmir vs Railways at Delhi

Gujarat vs Vidarbha at Surat

Saurashtra vs Haryana at Rajkot

Maharashtra vs Delhi at Pune

Odisha vs Rajasthan at Balangir

Goa vs Assam at Porvorim

Himchal Pradesh vs Andhra at Dharamsala

Jharkhand vs Hyderabad at Ranchi

Tripura vs Kerala at Agartala 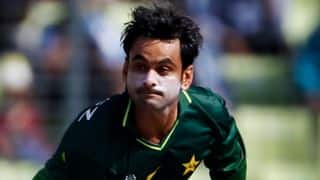