Hello and welcome to CricketCountry’s coverage of Round Eight of Ranji Trophy 2014-15. We will be bringing all the updates of Day Four of all matches here.

Basant Mohanty’s incisive bowling with brilliant match haul of 10 for 85 enabled Odisha to shock a fancied Punjab team by six wickets to take giant leap towards avoiding the relegation in the Ranji Trophy 2014-15, PTI reported.

Mohanty, who had taken 4 for 43 in the first essay again tormented the Punjab batsmen as his 6 for 42 was primarily responsible for the hosts being shot out for 141 in their second innings. He was ably supported by another right-arm seamer Deepak Behera (3 for 44), who also had an impressive match-figures of 7 for 91 as Odisha now climbed to eighth spot with 14 points and four clear of bottom-placed Saurashtra.

Shreyas Iyer and Nikhil Patil struck half centuries as Mumbai declared at 304 for nine to put themselves in a strong position on the third and penultimate day of their Ranji Trophy match against Baroda at Vadodara on Saturday.

Iyer stroked his way to 90 from just 92 balls with 12 fours and two sixes while Patil remained not out on 50 from 78 deliveries from which he hit four boundaries and one six as Mumbai declared their second innings to set an challenging target of 408 for Baroda for a win.

Inability of the spin troika to dismiss the Railways‘ last wicket pair of Anureet Singh and Avinash Yadav cost hosts Bengal three points in a crucial group league encounter of the Ranji Trophy match at Kolkata on Saturday.

At stumps, Bengal were 187 for five in their second essay after Railways scored 302 to get a vital first innings lead of 34 runs. Bengal currently have a lead of 154 runs with a day left but not enough runs to force an outright victory on a partially responsive Eden Gardens track.

Karnataka vs Uttar Pradesh at M Chinnaswamy Stadium in Bangalore: Karnataka 719 for nine declared and 215 vs UP 220 and 42 for two. Match Drawn.

Haryana vs Rajasthan at Chaudhary Bansi Lal Cricket Stadium in Lahli: Rajasthan 180 & 74 vs Haryana 373. Haryana won by an innings and 119 runs.

Gujarat vs Maharashtra at Sardar Patel Stadium in Valsad: Maharashtra 262 & 422 for three vs Gujarat 429 . Match Drawn.

Tripura versus Himachal Pradesh at MBB Stadium in Agartala: Tripura 346 & 249  vs Himachal 535 for 5 decl. Match Drawn

Goa vs Jharkhand at Goa Cricket Association Academy in Porvorim: Goa 215 & 223 vs Jharkhand 385 & 55 for two. Jharkhand win by eight wickets

Kerala vs Services at Thalassery Cricket Stadium in Thalassery: Services 318 & 174 (following on) vs Kerala 483 & 10 for one. Kerala won by nine wickets 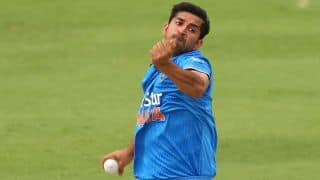