Catch all the live updates of Day 1 of the Round 8 of the Ranji trophy.

Ranji Trophy 2014-15 season has seen many up and downs. But what happened on the Day one of Round Nine was quite extra-ordinary. In a rare occurrence on a cricket pitch, 26 wickets fell in the day one of the Group B match between Haryana and Gujarat at the Sardar Vallabhbhai Patel Stadium at Ahmedabad. By the end of an action-packed day, Haryana were 71 for six in their second innings, leading the hosts by 75 runs.

Spinners ruled the roost with Ramesh Powar (5 for 40) and Amit Mishra (5 for 37) taking five wickets each for Gujarat and Haryana respectively. Home team s left-arm medium pacer Rush Kalaria gave his team a slight edge going into day two by taking four wickets each in either innings. Opting to bat on a tricky surface, Haryana managed 129 in 31.5 overs. Gujarat replied with 125 runs in 29.2 overs.

Meanwhile Mumbai s Wankhede Stadium will host the final of the Ranji Trophy next month while Kolkata and Bengaluru would conduct the two semi-finals, according to Board of Control for Cricket in India (BCCI) sources. The national championship s summit clash is scheduled from March 8-12 while the semi-finals are to be held from February 27 to March 1.

The BCCI has allotted the four quarter finals to Cuttack, Indore, Lahli and Jaipur, sources added. The quarter finals are slated from February 15 to 19. The final group phase matches of the championship to spot the knock out qualifiers commenced from Friday, reported PTI.

Matches are being played in Round 9

Both teams are still in content for spot in the quarter-finals and would like to get the crucial six points to sail in the next round. If Baroda manage to win six points from this tie they would end up with 24 points and will get the second spot in the group. While if Tamil Nadu get first innings lead and end the match in draw they will end up with 26 points and will surely enter the quarter-finals. Even if Tamil Nadu don t get a first innings lead they would still be safe getting a single point from the match.

Toss: Tamil Nadu win the toss and elect to field.

Bengal have a very slim chance for making it for the quarter-finals spot and also this will be a must-win game for Madhya Pradesh. MP would want to collect six points from this match and end at 22 points. A win with bonus point would surely add to their chances. If Madhya Pradesh win with bonus point and Tamil Nadu lose against Baroda then they both will be tied at 23 points.

Toss: Bengal win the toss and elect to field first.

Mumbai will have a tough task at hand when they meet Mumbai at their home ground. Mumbai would need to win this match with a bonus point which will take them to 23 points. While the result of this match won t Karnataka s chances of qualification.

Toss: Mumbai win the toss and elect to bat first.

Railways are on same track as Madhya Pradesh and an outright win with six points will land them at 22 points. And win with a bonus point will take them to 23 points.

Toss: Railways win the toss and elect to bat first.

In Group B, Delhi have already stamped a place in the quarter-finals. Following them is Vidarbha and Maharashtra with 24 and 20 points. Gujarat (18 points ) and Haryana (17 points) are also in contention for for quarter-finals spot.

Punjab were defeated by six wickets against Odisha in the previous tie which has left them stranded at 19 points. Punjab would want to beat Delhi at Patiala to get six points which will take them to 25 points.

Toss: Delhi win the toss and elect to bat first.

This match will be crucial for both teams. Maharashtra would want to collect six points with an outright win which would take them to 26 points. While a first innings lead would take them to 23 points. For Vidarbha who are currently slotted at No. 2 in the Group B with 24 points even a first innings lead would do. If Punjab win with six points and Vidarbha draw the match with Maharashtra then both teams will be tied at 25 points.

Toss: Vidarbha win the toss and elect to Field

Toss: Hayana win the toss and elect to bat first.

Toss: Odisha win the toss and elect to Field

Himachal Pradesh will need to get at least three points to stay safe even if Andhra beat Goa with a bonus point.

Toss: Hyderabad win the toss and elect to Field

Andhra will need to win six points and hope for HP loss against Hyderabad.

Toss: Goa win the toss and elect to Field

Toss: Assam win the toss and elect to Field

Toss: Jharkhand win the toss and elect to Field 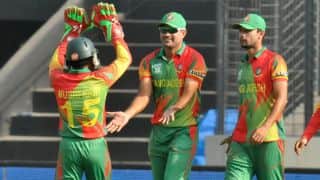 ICC World Cup 2015: Bangladesh want to be more than a party-spoiler