Hello and welcome to CricketCountry’s live coverage of Day 1 of the Ranji Trophy 2015-16 game between Saurashtra and Goa at the Saurashtra Cricket Association Stadium in Rajkot.

Hello and welcome to CricketCountry’s live coverage of Day 1 of the Ranji Trophy 2015-16 game between Saurashtra and Goa at the Saurashtra Cricket Association Stadium in Rajkot. Saurashtra has had an enthralling season so far, having played four games and have won each of them so far, as they sit atop the table with 25 points and would love to cement the plcae. Goa, on the other hand, has had a moderate season, having played five games with a win and four draws as they sit in the fourth spot of the table with 14 points and would love to rise above the table with a win here. However, looking at Saurashtra’s form this season, it seems this is going to be a tough ride for the Goans.

Shadab Jakati (5/72) took a five-wicket haul to bundle out Jharkhand for 209 and give Goa a 93-run first innings lead and three points in a Group C Ranji Trophy cricket match that ended in a draw. In reply to Goa’s first essay total of 302, Jharkhand resumed at 154 for four but failed to surpass the visiting team’s score. Goa declared their second innings at 102 for five and set Jharkhand a target of 196 late on the final day. Yadav (3/47) took three wickets in Jharkhand’s chase and they slumped to 100 for six before the stumps were drawn, and the home team managed to draw the game. While all-rounder Ravindra Jadeja was among the three half-centurions as Saurashtra chased down a steep 302-run target to register a four-wicket win over Services in their Ranji Trophy group C cricket match.

Live cricket scores Saurashtra 4/0 | Goa 232 | Overs 1 | Batting: M Dodia 4(6), AA Barot 0(0): Goa bundled out for 239 as Dharmendrasinh Jadeja and Sanandia took three wickets each. Darshan Misal ran out of partners and remained unbeaten on 106. Saurashtra have done really well even without their stars Cheteshwar Pujara and Ravindra Jadeja. Quite co-incidentally, both Jadeja and Pujara also excelled today for India. While Jadeja picked up the Man of the Match award, Pujara’s 31 and 77 in the match proved vital in the end.

Live cricket scores Goa | 208/9 | Overs 75 | Batting: D Misal 80(174), P Parameswaran 2(6): Goa have gone further downhill with the score reading 9 for 208 after 75 overs. Good news for them is that Darshan Misal is still going strong. He is batting on 80 and anchoring the innings. However, he hasn’t got any support from the other end. RR Singh (45) gave him good support and added 71 runs with him. But once he got out, the next two wickets fell quite quickly.

Live cricket scores Goa | 155/6 | Overs 60 | Batting: D Misal 52(123), RR Singh 26(41): At tea, Goa have reached 6 for 155. They haven’t lost any further wicket in the last 10 overs. Misal has reached to his fifty while Rituraj Singh has has looked good in his 41-ball 26. Saurashtra bowlers have done well in taking six wickets in two sessions. Sanandia has been the pick, with 3 wickets. Jadeja 2 and Unadkat 1 also played their part.

Live cricket scores Goa | 126/6 | Overs 51 | Batting: D Misal 42(101), RR Singh 7(8): Goa have lost Kauthankar and wicket keeper Rahul Keni in this phase of play. Both the wickets were taken by Dharmendrasinh Jadeja, a player who doesn’t only share the surname with his other illustrious team-mate Ravindra Jadeja, but also plays a similar role. He bats in the lower-middle order and bowls slow-left arm orthodox spin. Misal and RR Singh are unbeaten at the moment.

Live cricket scores Goa | 81/4 | Overs 39 | Batting: D Misal 24(75), S Kauthankar 2(8): Goa’s troubles have further increased as they have lost their skipper now. Jadhav, a seasoned campaigner, was expected to steer the Goa ship. He did get a start, but was finally dismissed by Shaurya Sanandia. He also became Sanandia’s third victim. Misal has now been joined by Snehal Kauthankar. Saurashtra aren’t missing Ravindra Jadeja here. Their big man is doing wonders for the country in Mohali!

Live cricket scores Goa | 70/3 | Overs 30 | Batting: D Jadhav 22(70), D Misal 22(49): At lunch, Goa have reached to 3 for 70. The duo of skipper Dheeraj Jadhav and Darshan Misal has so far added 32 runs, after the team was in a spot of bother early on. They were 3 for 38 at one stage, with the duo left for the rebuilding work. Saurashtra bowlers have done a good job so far, with Sharya Sanandia picking up two. Jaydev Unadkat took the only other wicket to fall.

Live cricket scores Goa | 45/3 | Overs 20 | Batting: D Jadhav 15(45), D Misal 4(14): Goa have lost their way here. At the moment, they are 3 down for 45 and in a precarious position. Jaydev Unadkat first removed Kamat for five and then Sanandia removed Asnodkar to leave Goa reeling at 3 for 38. Asnodkar scored 20 before falling. Goa skipper Dheeraj Jadhav, who has played for Maharashtra and Assam in the past, is playing along with Darshan Misal at the moment.

OUT! S Kamat ct A V Vasavada b Jaydev Unadkat 5(6)

Live cricket scores Goa | 14/1 | Overs 8 | Batting: S Asnodkar 8(29), S Kamat 8(5): Goa haven’t got off to the best of the starts as they’ve lost their opener Amogh Desai upfront. Desai took a few deliveries to settle but couldn’t score a run and was finally dismissed by Sanandia, who got him caught by Sagar Jogiyani. Swapnil Asnodkar and S Kamat are playing at the moment. Asnodkar is best remembered for his stint with the Rajasthan Royals (RR) team during the first season of Indian Premier League, which RR won.

OUT! A Desai ct Sagar Jogiyani b Shaurya M Sanandia 0(14) 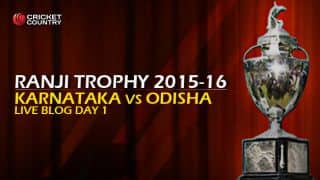