Welcome to CricketCountry's live cricket blog and updates on the second day of the ongoing Ranji Trophy 2015-16 match.

Hello and welcome to CricketCountry s live coverage of Day 2 of the Ranji Trophy 2015-16 game between Saurashtra and Goa at the Saurashtra Cricket Association Stadium in Rajkot. Saurashtra have had an enthralling season so far, having played four games and have won each of them so far, as they sit atop the table with 25 points and would love to cement the place. Goa, on the other hand, has had a moderate season, having played five games with a win and four draws as they sit in the fourth spot of the table with 14 points and would love to rise above the table with a win here. However, looking at Saurashtra s form this season, it seems this is going to be a tough ride for the Goans. Also Read: Live cricket score, Saurashtra vs Goa, Ranji Trophy 2015-16, Group C match, Day 1 at Rajkot.

LIVE CRICKET SCORE Saurashtra 224/8 | 88 overs | BATTING: Kamlesh Makvana 27(54), Jaydev Unadkat 10(32): At stumps of Day 2, the hosts trail Goa by 15 runs with two wickets to spare and two days left in the match. After bowling out Goa for 239 in the first innings, even Saurashtra have struggled with the bat. Avi Barot top-scored for them with 56 from 127 balls. Meanwhile, Goa’s R R Singh has bagged four wickets so far in the game and the other wikcets were shared between Amit Yadav and Shadab Jakati with the former claiming three of those. Shaurya M Sanandia was the last batsman to get dimissed on Day 2. OUT! Shaurya M Sanandia b R R Singh 0(1)

LIVE CRICKET SCORE Saurashtra 92/1 Goa 239 | Overs 34 BATTING: Avi Barot 47(103), Sagar Jogiyani 10(37): From here, Saurashtra trail Goa by 147 runs with nine wickets to spare. Opening batsman Mohsin Dodia became the first batsman to get dismissed by Goa in the early hours of Day 2. He scored 64-ball 33 before getting stump by Rahul Keni off Shadab Jakati’s delivery on the second delivery of the 22nd over. OUT! Mohsin Dodia st Rahul Keni b Shadab Jakati 33(64)

LIVE CRICKET SCORE Saurashtra 49/0 Goa 239| Overs 19 BATTING: Mohsin Dodia 31(58), Avi Barot 18(56): Saurashtra are off to a decent start after bowling Goa out for 239. Dodia is batting on 31, and will look to bring up his half-century. Meanwhile, the opening partnership for Saurashtra is worth 49, a good one by any means. Earlier in the match, Dharmendrasinh Jadeja and Saurya Sanandiya’s three-wicket hauls had helped restrict Goa to a score of 239.

Saurashtra dominated the proceedings on Day 1. They kept the pressure on Goa batsmen from the onset and kept striking at regular intervals. The Goa batsmen could never really recover from it and ended their team’s innings at 239. Dharmendrasinh Jadeja and Sanandia took three wickets each for Saurashtra. For Goa, the lone bright spot was Darshan Misal, who ran out of partners and remained unbeaten on 106.

Saurashtra did really well even without their stars Cheteshwar Pujara and Ravindra Jadeja. Quite co-incidentally, both Jadeja and Pujara also excelled yesterday for India against the South Africa in the first Test. While Jadeja picked up the Man of the Match award, Pujara s 31 and 77 in the match proved vital in the end.

Day 2 will decide which way the match goes. Saurashtra batsmen would look to add to the agony of Goa by scoring big. While Goa bowlers would look to salvage some pride by restricting them to a low total. 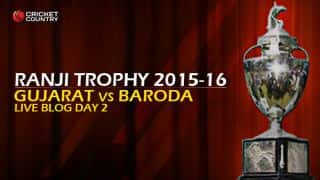 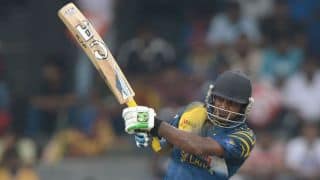