Can Saurashtra ease past Tripura or is there an upset on the cards?

Hello and welcome to CricketCountry’s coverage of the round one matches of the Ranji Trophy 2015-16 match between Saurashtra and Tripura in  at Madhavrao Scindia Cricket Ground at Rajkot. A couple of the senior members of the Indian team like Cheteshwar Pujara and Ravindra Jadeja will be a part of the squad for Saurashtra. Jaydev Shah has however been named skipper for the side this time. Pujara in all likelihood is set to be picked in the Indian squad for the Test series against South Africa. Jadeja, on the other hand will try his best in the domestic season to be back in contention for Team India. READ: Ranji Trophy 2015-16: Cheteshwar Pujara, Ravindra Jadeja named in Saurashtra squad

Live Cricket Score Saurashtra 270/6| Overs 90|  BATTING: Chirag Jani 3 (6), Sheldon Jackson 82 (152): Day has ended. Saurashtra have scored 270 at a decent run-rate of three as per Test standards. Sheldon Jackson upped the tempo and hit a six. His innings of 82 not-out also featured eight fours. Vasavada was unlucky and got run-out having scored just one run.

Live Cricket Score Saurashtra 241/5| Overs 78|  BATTING: A V Vasavada  0 (8), Sheldon Jackson 58 (116): Jadeja was batting well on 91 before getting caught by N N Sen Choudhary of A A Dey’s bowling. Good thing for Saurashtra is that Jackson is still on the crease. Scoring rate has slightly reduced after the fall of Jadeja’s wicket.

OUT! Ravindra Jadeja  c Sen Chaudhary b A A Dey

Live Cricket Score Saurashtra 227/4| Overs 74|  BATTING: Ravindra Jadeja  85 (132), Sheldon Jackson 51 (105): Jadeja is on course to score a well-paced century, he is just 15 runs short of it. Jadeja has hammered 11 fours so far. Jadeja who was scoring quickly has somewhat decreased the rate in which he was scoring runs. He is now batting on 85 of 132 balls.

Live Cricket Score Saurashtra 189/4| Overs 62|  BATTING: Ravindra Jadeja  69 (94), Sheldon Jackson 29 (72): Both Jadeja and Sheldon are playing well. Jadeja has completed his fifty and in a quick fashion. At present he is batting on 69 having faced 94 balls. Jackson is playing slowly and is batting on 29 runs. This partnership is crucial for Saurashtra’s success.

Live Cricket Score Saurashtra 95/4| Overs 37|  BATTING: Ravindra Jadeja  9 (11), Sheldon Jackson 0(5): A Dey took the key wicket of Cheteshwar Pujara. Jadeja needs to bat well; Saurashtra at this moment needs a century from him. A Dey is the pick of the bowlers, he has taken three wickets.

Live Cricket Score Saurashtra 60/1| Overs 27|  BATTING: Sagar Jogiyani 22 (82), Cheteshwar Pujara 10(31): It’s a slow and steady start by Saurashtra. They lost Barot on 23 but thereafter Jogiyani and Pujara have played patiently and steadied the ship. They are batting on 22 and 10 runs respectively. A Dey took the wicket of Barot.

OUT! A Barot c Solanki b A Dey

TOSS: Saurashtra, who chose to Bat

Sudeep Tyagi and Sidharth, who played for Saurashtra in the previous season will not take part in this season. SInce the third One-Day International (ODI) is being plaHaving played their first-ever Ranji game only in December 1985, Tripura is one of the junior-most teams that will feature in the Ranji Trophy 2015-16 season. Being a relatively small region coupled with lower buzz for cricket in the area of administration has resulted in Tripura being one of the least successful sides in the Ranji competition. READ: Ranji Trophy 2015-16: Tripura squad and team Preview

The last of Tripura’s seven wins came in the 2012-13 season against Himachal Pradesh. In the 20 matches since, Tripura have failed to register a single victory though they have shown signs of competitiveness on occasion. 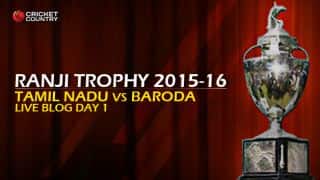