Catch the live scores and updates from Day 3 of the Group C game between Saurashtra and Tripura here.

Hello and welcome to CricketCountry’s coverage of Day Three of the Group C match played between Saurashtra and Tripura at the Madhavrao Scindia Cricket Ground, Rajkot. Saurashtra won the toss and put up a total of 307 courtesy of two brilliant knocks from Ravindra Jadeja and Sheldon Jackson. Jadeja scored 91 while Jackson was out for 97. Jadeja then backed up his impressive show with the bat with a fine display of bowling to take 6 for 27 as Saurashtra bowled out Tripura for a score of just 103. Arindam Das was the top scorer for them with 24. Tripura in their second innings, following on are in trouble at 11 for 3. READ: Ranji Trophy 2015-16: Tripura squad and team Preview
Live cricket score Tripura 86/6 | Overs 53 | BATTING: Saurabh Das 3(36): Ravindra Jadeja’s five-wicket haul in the second innings and over all 11 wickets helped Saurashtra defeat Tripura by an innings and 118 runs. After scoring a 307 in the first innings, Jaydev Shah’s side bowled out Tripura for 103 thereby enforced a follow-on and that was followed by the away side getting bundled up for a mere total of 86. Mura Singh was the top-scorer for Tripura with 47-ball 36.

Live cricket score Tripura 65/8 | Overs 40 | BATTING: N N Sen Choudhury 0(3), K K Acharjee 4(42): The latest wicket to fall was A A Dey who lasted for about 97 balls but had managed to post just 17 runs. He became Dharmendrasinh Jadeja’s third scap for the innings and fourth wicket of the match. Meanwhile, the other good performer for Saurashtra has been India’s star all-rounder Ravindra Jadeja, who aleady has nine wickets to his name in the ongoing game. Tripura faced a follow-on when the side got bowled out for 103 after bundling up Saurashtra for 307.

Tripura were jolted by Jaydev Unadkat first up when he dismissed SS Roy for a 16-ball duck. It was then the turn of Jadeja who torment the visitors. In just the four overs that he bowled so far in the day, he picked up  a couple of wickets to finish with figures of 4-3-4-2! He first had Arindam Das, caught by Cheteshwar Pujara for three. And then he had R K Solanki caught and bowled for four to leave Tripura in tatters at 11 for 3 at the end of 11 overs. The home side will hope that the Indian spinner can continue to work his magic and ensure that they win the game on the third day itself. The trail for Tripura is still 193 runs and seven wickets in hand. The home team will want to star their season with a dominating win while Tripura will hope to fight out. Read:Ranji Trophy 2015-16: Saurashtra squad and team preview 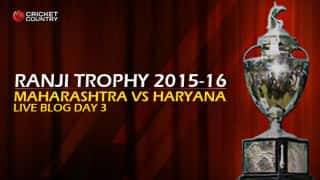