Services and Kerala will take each other on in the Ranji Trophy 2015-16 fourth round match at Palam A Ground, Delhi

Hello and welcome to CricketCountry’s live coverage of Day 1 of the Group C game of the 2015-16 Ranji Trophy between Services and Kerala, live from Palam A Ground, Delhi. With two outright wins, Services are at the top of Group C with 15 points from 3 matches. A win here will take them another step forward towards promotion. They will also be playing at home, which will come to their advantage. Kerala has lost once, and are currently placed sixth on the table, tied with Jharkhand on 6 points (though they are below Jharkhand in quotient). However, with Sanju Samson, Raiphi Gomez, VA Jagadeesh, and Sachin Baby in their brigade, they will certainly not be pushover against Soumik Chatterjee’s men — a side that boasts of Yashpal Singh and the new bowler on the block, Diwesh Pathania. Complete coverage of Ranji Trophy 2015-16

Live cricket scores Kerala 198/2 | Overs 90 | Batting: Rohan Prem 58(159), Sachin Baby 32(75): The last batsman to get dismissed was Vasudevan Jagadeesh in the 68th over. From there, Rohan and Sachin Baby handled Kerala’s innings, as the former reached an excellent half-century, Baby gave the required support from the other end.

Live cricket scores Kerala 34/0 | Overs 14 | Batting: Vasudevan Jagadeesh 11(38), Akshay Kodoth 17(45): After winning the toss and electing to bat, the visitors have had a decnet start. After getting thrashed by Jharkand by 133 runs in the previous round, Kerala will want to change things for themselves and go abck to winning ways. Meanwhile, Services had an excellent Round 3 game against Jammu and Kashmir where they went passed their opponenets easily by nine wickets.

Diwesh Pathania started the tournament for Services in sensational style, taking 6 for 19 and 7 for 64 (second-best figures by an Indian on First-Class debut) against Jharkhand at Palam A Ground. Unfortunately, chasing 77, they lost a wicket on 59, which deprived them of a bonus point. They continued with the good job at Porvorim, where four men scored fifties and both Pathania and Poonam Poonia bowled well to secure a 117-run lead over Goa. Pathania and Raushan Raj then skittled out Jammu & Kashmir at Jammu for a mere 85, and following a 144-run lead, Muzzaffaruddin Khalid claimed 7 for 61. Chasing a mere 18, unfortunately, Services lost a wicket again, and were thus deprived of another bonus point.

Kerala travelled across the country to Srinagar for their first match, where Baby (151) and Samson (101) gave them a crucial 155-run lead. Raiphi Gomez and Rohan Prem then pushed for a victory, but unfortunately they ran out of time, finishing on 44 for 4 in 8 overs chasing 71. They were unfortunate yet again at Hyderabad. Prem’s 208 took them to 401 before K Monish gave them a 183-run lead. Monish then took 5 for 73 to go with his 6 for 91 in the first innings, but Hyderabad saved the match, finishing on 176 for 7. 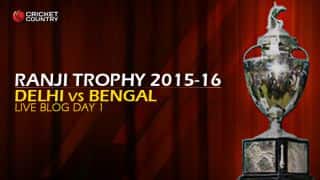