South Africa resume from their overnight score of 267/7, desperately hoping to cross the 300-run mark.

Hello and welcome to CricketCountry’s live coverage of the second day of the ongoing third Test between South Africa and England at the Wanderers Stadium in Johannesburg on Friday. This is Amit Banerjee, and I shall keep you updated with the events of the game as and when they happen. South Africa were looking nervous on a score of 267 for the loss of seven wickets, though they still had hope in the form of Chris Morris and Kagiso Rabada, who were batting on 26 and 20 respectively. The duo have stitched a useful 42-run partnership so far, and their presence will be crucial for the side to move past the 300-run mark and beyond. LIVE CRICKET SCORECARD: South Africa vs England 2015-16, 3rd Test at Johannesburg, Day 2

LIVE CRICKET SCORE: England 238/5 in 52.4 overs; BATTING: Joe Root 106(131), Jonny Bairstow 4(15): FOUR! Stokes brings up the 200 for England with a lusty blow over mid-off! The pair look set to cross 300 in no time the form they are in at the moment! OUT! Morkel does it for South Africa! Stokes gets a top-edge while fending a rising delivery along middle and leg, with Morkel moving to his right to complete the catch near silly mid-off! End of the whirlwind 111-run partnership between Stokes and Root, and Morkel is pumped up after the dismissal! Meanwhile, Root is five runs away from his ninth Test hundred!  FOUR! Root brings up his ninth Test hundred with a beautiful drive towards extra-cover off the bowling of Morris! Takes 126 balls to reach the milestone! FOUR! Root follows it up with an exquisite straight drive! Meanwhile, bad light stops play at the Wanderers, with England still trailing the hosts by 75 runs. OUT! Ben Stokes c & b Morne Morkel 58(54)

LIVE CRICKET SCORE: England 196/4 in 45 overs; BATTING: Joe Root 79(105), Ben Stokes 52(48): FOUR! First boundary of the third and final session of the day. The short of length delivery angles into Stokes, with the all-rounder moving to 45 with an outside edge that sends the ball flying towards the slips. FOUR! Root hooks a short one from Viljoen towards backward square-leg for the partnership to be worth 90. Fifty for Stokes, who gets to the milestone in 46 deliveries! Pulls a short of length delivery by Viljoen outside off towards midwicket! And Viljoen helps complete the 100-run partnership for the fifth wicket with a front-foot no-ball.

LIVE CRICKET SCORE: England 162/4 in 39 overs; BATTING: Joe Root 60(86), Ben Stokes 38(31): Stokes has announced his intention with a six and a four in the 32nd over by Morkel. The South Africans have to be careful of the New Zealand-born all-rounder, especially after the latter struck the second-fastest Test double-ton of all time! FOUR! Stokes welcomes Morris into the attack with a well-timed flick off a full-length delivery towards midwicket! Meanwhile, Root hits consecutive boundaries off Morkel in the 35th over to move to 45 in no time! Fifty for Root, his 19th in Test cricket, as he gets to the milestone with a stroke that sends te ball towards deep backward point. The duo are plundering the South African attack with little difficulty at the moment! And its tea on Day 2!

LIVE CRICKET SCORE: England 103/4 in 32 overs; BATTING: Joe Root 28(68), Ben Stokes 11(8): Compton and Root complete the 50-run partnership at the start of the 26th over. OUT! Compton departs for 26 after edging a short pitched delivery along off towards the slips, where Dean Elgar held on to a fine catch! Much needed breakthrough for South Africa, as they break England’s momentum! Meanwhile, Root gets into the act after Compton’s dismissal, hitting as many as three boundaries till the 28th over! OUT! End of Taylor’s innings as Temba Bavuma takes an inspirational catch. Taylor gets an inside edge onto his thigh, with the ball deflecting high over Temba at short-leg. The pudgy batsman jumps high in the air, and completes the catch in the second attempt! England lose their fourth wicket with just 91 on board! OUT! Nick Compton c Dean Elgar b Kagiso Rabada 26(68), James Taylor c Temba Bavuma b Morne Morkel 7(13)

LIVE CRICKET SCORE: England 66/2 in 23 overs; BATTING: Nick Compton 25(65), Joe Root 18(37): FOUR! Root displays his intent at the start of the second session of the day with an impressive pull towards midwicket off Morris in the 17th over! DROPPED! De Villiers drops an edge from Compton off the first ball of the  19th over, with Compton surviving on a score of 6. The South African-born batsman follows it up with a couple of boundaries later in the over! CONSECUTIVE FOURS! Compton moves to the 20s with a couple of boundaries in the 23rd over!

LIVE CRICKET SCORE: England 27/2 in 12 overs; BATTING: Nick Compton 2(30), Joe Root 2(12): Cook and Hales open the innings for England as Morris bowls the first over of the English innings. OUT! Rabada draws first blood with a fullish delivery outside off that Hales gets a bottom-edge to while attempted to guide it towards midwicket, with skipper AB de Villiers moving to his left and taking the catch in the slips. Poor footwork by the opener as he departs for just 1 off 10 balls. South Africa get exactly what they would have needed — an early wicket! They will be on top till lunch on the second day, unless they leak a lot of boundaries in the remainder of the session. OUT! Captain Cook is the next to depart, as he nudges a ball outside leg down towards leg, with Dane Vilas taking a flying catch to his left to give Hardus Viljoen his maiden international wicket off his very first ball! And England head to lunch on a shaky note, trailing South Africa by 286 runs! OUT! Alex Hales c AB de Villiers b Kagiso Rabada 1(10), Alastair Cook c Dane Vilas b Hardus Viljoen 18(27)

LIVE CRICKET SCORE: South Africa 313 in 99.3 overs; BATTING: Hardus Viljoen 20(16): 50-partnership has been completed between Rabada and Morris with four byes in the second over of the day. Superb stand between the pair to guide South Africa towards the 300-run mark! OUT! The partnership has been broken, and it is Broad who takes his second wicket of the innings. Fifth catch for Bairstow now, who is a catch away from equalling the record for most catches in a Test innings at the Wanderers held by Jack Russell (1995). SA 281/9. OUT! Bairstow gets his sixth catch as Rabada is the next to depart, giving Anderson his first wicket of the innings. And its upto Hardus Viljoen and Morne Morkel, the two newcomers at the crease, to somehow guide their side past the 300-run mark, which Viljoen crosses with a couple of consecutive boundaries at the start of the 99th over! DROPPED! Bairstow misses out on a record-levelling seventh catch that would have ended the South African innings! OUT! Morkel edges the length delivery from around the wicket to Cook in the slips for South Africa to get bowled out for 313 OUT! Chris Morris c Jonny Bairstow b Stuart Broad 28 (61), Kagiso Rabada c Jonny Bairstow b James Anderson 24(64), Morne Morkel c Alastair Cook b Ben Stokes 12(20)

South Africa had won the toss on Day 1, and stand-in skipper AB de Villiers elected to bat first. While England opted to keep their team unchanged from that of the second Test at Cape Town, South Africa made two changes to their playing XI by drafting in Hardus Viljoen and Dane Vilas in place of Dane Piedt and Quinton de Kock. Vilas was brought in as an emergency replacement for de Kock, who suffered a knee injury and was ruled out barely an hour before the start of the Test. READ: South Africa struggling at 267/7 at stumps on Day 1 of 3rd Test vs England

The hosts began well on a track that is known to be among the best for batting in the country. Stiaan van Zyl was dismissed for 21 with South Africa losing their first wicket with 44 on board. Dean Elgar and Hashim Amla then consolidated after the dismissal, and took South Africa to a score of 117 for the loss of one wicket. Elgar was then caught by wicketkeeper Jonny Bairstow off the bowling of Moeen Ali for the 73-run partnership to come to an end, as things started to go downhill for the Proteas thereafter. The highlight of the day was Steven Finn’s brilliant spell during the second session, that saw the lanky pacer get rid of Hashim Amla with a near unplayable delivery that angled away from the batsman after pitching on a good length between off and middle, with Amla getting a thick edge.

TOSS: South Africa won the toss and chose to bat. 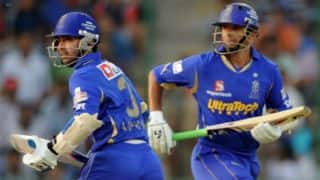 Ajinkya Rahane equals Rahul Dravid in innings taken to get 2,000-run milestone in ODIs, during India vs Australia 2015-16 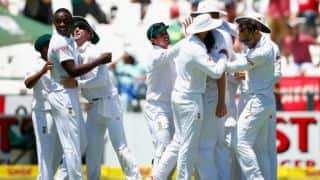