Catch the live updates of the second T20I between South Africa and West Indies 2014-15.

West Indies managed the unthinkable by chasing down 232 with four balls to spare. They won by four wickets and completed what was the highest run chase in Twenty20 Internationals. Chris Gayle and Marlon Samuels set it up with a partnership of 154 from just 73 balls. Gayle was finally dismissed for 90 but by then West Indies had reduced the equation to what is the norm in T20s. Samuels himself was snapped by David Wiese who kept South Africa in the game despite the colossal assault by Gayle and Samuels. But the depth of West Indies power hitting came to the fore as they chased down the target with ease with, helped by useful cameos by Andre Russel, Dwayne Bravo and Darren Sammy who finished things off in style with a seven ball unbeaten 20. Faf du Plessis’ hundred goes in vain.

Man of the Match: Chris Gayle. “To be honest, I’m so glad we actually won the series…this morning I woke up and saw the World Cup squad, and there was no [Kieron] Pollard and no [Dwayne] Bravo. It really hurts deeply inside, and that’s the reason I actually wanted to win the series. We have the best team here, and to see those two guys excluded is sad for West Indies cricket. If you really believe in our ability, those two guys should be in West Indies cricket, both in South Africa for the 50-over tournament, and in the World Cup squad,” said Gayle at the post-match presentation. The big man clearly wasn’t in favour of what the West Indies selectors have deemed their best team.

West Indies have gone absolutely ballistic in the powerplay overs. They are in fact 17 ahead of where South Africa were at the same stage. West Indies concluded the powerplay at 86 for one with Chris Gayle and Marlon Samuels matching each other shot for shot. The pair have added 63 runs off a mere 25 balls. The West Indies innings has already featured four massive sixes and as many as 14 boundaries. They are in the contest with both Gayle and Samuels hitting the ball like a dream. Its strange to see the South African bowlers under so much pressure even with the cushion of 231 runs. that’s the fear Gayle has managed to instill.

South Africa have set West Indies a mammoth 232 to win the second Twenty20 International at Johannesburg. The ball tends to fly in the Highveld and it lived up to that reputation to say the least. Faf du Plessis played the innings of his life, a breathtaking 119 off 56 balls. He was dismissed only in the 19th over of their innings. He was helped along the way by David Miller who scored a quick fire 47. The duo added 105 runs for the third wicket. The South African innings featured as many as 12 massive sixes.

South Africa are on the charge. A massive 69 runs came off the powerplay overs. South Africa lost a couple of early wickets. Morne van Wyk was dismissed as early as in the first over. Rilee Rossouw who was promoted to open played a little cameo before edging one to Denesh Ramdin as Jason Holder struck in his first over. Since then its been the Faf du plessis shgow. He has carted the bowlers all over the park. The West Indies have consistently missed their lengths and consistently paid dearly for their mistakes. The pair of du plessis and David Miller have added 48 for the third wicket in quick time.

West Indies have won the toss and expectedly opted to bowl in the second Twenty20 International at Johannesburg. West Indies have made a solitary change to the eleven that won the first match at Cape Town drafting in Sulieman Benn for Ashley Nurse, whereas South Africa have made as many as three changes to their line up with Reeza Hendricks, Wayne Parnell and Ragiso Rabada making way for Justin Ontong, Marchant de Lange and Aaron Phangiso. Its do or die for South Africa.

Hello and welcome to CricketCountry’s live coverage of the second Twenty20 International (T20I) between South Africa and West Indies at Johannesburg on Sunday. South Africa may have thrashed West Indies 2-0 in the Test series, but the West Indies came back strongly to win the first T20I at Newlands, Cape Town. 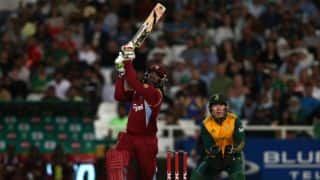