Follow live updates of Day Three of the third Test between South Africa and West Indies.

West Indies ended a riveting day’s cricket four runs behind South Africa and two wickets down. West Indies began poorly in their second innings to be reduced to 27 for two in the first one hour into the final session. Morne Morkel and Debutant Simon Harmer shared the wickets. Morkel bowled with hostility and targeted the body of Devon Smith from around the wicket where as Harmer bowled Kraigg Brathwaite off a beauty that was meant to turn but didn’t and hit the top of off stump as Brathwaite played inside the line of the ball. Leon Johnson and Marlon Samuels then rescued the stuttering West Indies innings to take them to close of play without further damage. Leon Johnson is unbeaten on 37 and Marlon Samuels on 26. The pair have added 61 runs together. If the West Indies can build on this partnership they can wrest control of the Test and transfer the pressure back on to the hosts.

Earlier during the day AB de Villiers dominated proceedings to become the only batsmen from the six half centurions in the match to convert his knock into a hundred. De Villiers’ 148 was his sixth Test ton against the West Indies and his 21st overall. De Villiers with assistance from Faf du Plessis, Hashim Amla and to a lesser extent Stiaan van Zyl propelled the South African total to 421.

West Indies 88/2| Overs 34
Leon Johnson 37 (66), Marlon Samuels 26 (57)
Leon Johnson and Marlon Samuels are still out there for the West Indies at stumps on Day Three. The duo have added 61 runs for the third wicket to keep the visitors hopes of pushing for a result in the final Test alive.
West Indies 27/2| Overs 14
Leon Johnson 3 (2), Marlon Samuels 0 (1)
Simon Harmer continues to an impress on debut. He has struck on the fifth ball of his first over in the second innings. He troubled Kraigg Brathwaite with turn and disconcerting bounce through the over before beating his outside edge but not the off stump.
OUT! Kraigg Brathwaite 16 (45) B Simon Harmer
West Indies 23/1| Overs 11
Kraigg Brathwaite 15 (30)
Morne Morkel gets Devon Smith with the old strangle down the leg side. Morkel came around the wicket and targeted the left handers body with the disconcerting bounce he tends to generate. Smith gloved one to de Villiers to be dismissed for 7.
OUT! Devon Smith 7 (36) C de Villiers B Morne Morkel
South Africa 421| Overs 122.4
Morne Morkel 4 (11)
AB de Villiers was the last man to go for South Africa after a superlative 148. De Villiers’ 21st Test century was also his sixth against the West Indies. He was caught on the boundary. Marlon Samuels accounted for his wicket. South Africa have been bowled out for 421 with a 92-run first innings lead.
OUT! De Villiers 148 (194) C Gabriel B Samuels
South Africa 415/8 | Overs 121
AB de Villiers 145(188), Morne Morkel 1 (1)
South Africa lose another wicket in the form of a run out as Dale Steyn walks back to the hut. Steyn is the third South African to be run out this innings in addition to Alviro Petersen and Vernon Philander. Despite the run out the over fetched eleven runs as de Villiers hit a boundary and a gigantic six.
OUT! Dale Steyn 0 (1) RUN OUT Leon Johnson
South Africa 404/8 | Overs 120
AB de Villiers 135(183)
Debutant Simon Harmer failed to create an impression with the bat. Jerome Taylor has accounted for his wicket for a measly 10. He and de Villiers took South Africa past 400 before Harmer was dismissed. The decision was questionable and South Africa had two reviews up their sleeve but for some inexplicable reason they chose not to go upstairs. The perils of being a lower order batsman perhaps.
OUT! Simon Harmer 10 (37) LBW Jerome Taylor
South Africa 384/7 | Overs 110
AB de Villiers 127(171)
Vernon Philander gets run out. He’s gone for a duck. West Indies has to take the opportunity to wrap the innings up fast if they have to remain competent.
Vernon Philander 0(7) run out (Holder/Benn)

South Africa are in command at 227 for three to begin day Three of the third Test against West Indies at Cape Town. The Proteas built consistent partnerships through Day Two to transfer the pressure back on to the tourists everytime the West Indies got a bit of a lift with a wicket. The West Indies bowlers were largely ineffective with the exception of Jason Holder who held his own on a day that belonged to the hosts. West Indies were earlier bowled out for 329 which looked like a challenging total but it could have been a lot more. Five West Indian batsmen got promisi8ng starts but threw it away in their 40’s and 50’s to hand over a slight advantage to South Africa at the conclusion of their first innings.

I am Ankur Dhawan and will take you through the proceedings of the day. In prospect, this is an interesting day’s play. Hashim Amla and AB de Villiers are the batsmen in the middle and both have moved to good starts. There are ominous signs for the West Indies and they have to do something soon to stop the South African charge. 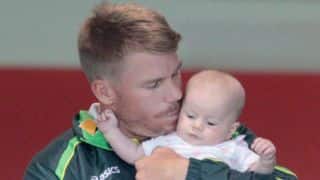