Follow live updates of Day Four of the third Test between South Africa and West Indies.

West Indies committed Hara-Kiri at the fag end of a rain curtailed fourth Day at Cape Town against South Africa. West Indies lost their last seven wickets for a meager 33 runs to be bowled out for 215 when at one stage they were sitting pretty at 182 for three. The wicket of Marlon Samuels marked the beginning of the end off the West Indian innings.

Samuels made a valuable 74 but the tourists needed more from him in this crucial Test match. Dale Steyn and the West Indies lower order lived up to their respective reputations as the visitors were steamrolled after the wicket of Samuels. Jermaine Blackwood was bowled by Steyn for 13, Denesh Ramdin followed suit to be dismissed by Steyn for a golden duck.

Simon Harmer then joined in as the Proteas dug their teeth deeper into the West Indies lower order. At one point the visitors lost number seven, eight and nine at the same score, reading 213. Although, Shivnarine Chanderpaul played a valiant innings of 50 which was his 66th Test half century, he inexplicably decided not to farm the strike, exposing the tail to the pace and prodigious reverse swing of Steyn. Eventually the southpaw was run out for exactly 50 leaving the South Africans just a 124 runs to win and three overs to negotiate on the fourth evening. Sulieman Benn provided the visitors a moment of joy on the brink of stumps as he bowled Alviro Petersen for a duck off what turned out to be the last ball of the day. South Africa now require 115 runs to seal the series two nil with an entire day’s cricket remaining.

Incessant rain has left the outfield at Newlands Cape Town sodden. A direct consequence of that, the entire first session on Day Four was wiped out. We should have been half an hour into the second session on a normal day but the rain gods have been unkind and we have lost plenty of overs which will in all likelihood influence the eventual outcome of this Test match. The onus is on the West Indies to push for a win since South Africa are one nil up in the series. The previous Test at Port Elizabeth was also rain affected and eventually ended in a tame draw. While South Africa may be cooling their heels, West Indies will be anxious to get going with the match. The next inspection is due at 2 pm local time; 17:30 IST.

Umpires will inspect Newlands at 2pm. If conditions are suitable, the match will resume ASAP after the inspection. #SSCricket

West Indies resume Day four at 88 for two, trail South Africa by four runs. South Africa were bowled out for 421, courtesy of 148 by AB de Villers, that ensured South Africa took a lead by 92. Faf du Plessis and skipper Hashim Amla made 68 and 63 respectively and provided de Villiers with wonderful support. Stiaan Van Zyl chipped in with a crucial 33 low down the order as well.

Fast bowler Jason Holder has justified his place in the side as he and Marlon Samuels picked up two wickets apiece. West Indies made a slow start to the innings as they lost Devon Smith in the 11th over for seven by Morne Morkel. Immediately after that his partner Kraigg Brathwaite was bowled by off-spinner Simon Harmer, who is having a fantastic debut.

Earlier, West Indies had won the toss and decided to bat first. They ended their innings at 329 thanks to half-centuries by Leon Johnson, Jermaine Blackwood and skipper Denesh Ramdin. Dale Steyn went past Makhaya Ntini and became his nation’s second highest wicket-taker. Harmer had a dream debut as he picked up three wickets in his debut innings and kept the West Indies batsmen in check as he troubled all the batsmen. South Africa responded with 421 after yet another exciting innings by de Villiers

South Africa lead the three-match series 1-0 and will look to win the ongoing Test to ensure they win the series comprehensively. West Indies on the other hand, after an impressive performance in the second Test will look at draw level as the match is currently evenly poised. 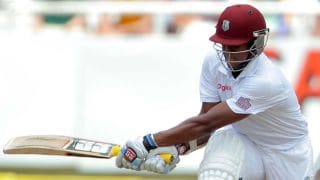