(South Africa will aim to carry the momentum in the second Test, and the West Indies will be up against another huge challenge. Catch Live Cricket Scores of the match here)

Hello and welcome to CricketCountry’s live blog of the second day’s play at Port Elizabeth between South Africa and the West Indies here. This is Ayush Gupta, and I will be bringing you the updates of the match. South Africa finished Day One of the second Test against West Indies at Port Elizabeth at a commanding 270 for two. Dean Elgar made a significant contribution with his third Test match hundred where as Faf du Plessis found some form en route to an unbeaten 99. South Africa will endeavour to put up a score in excess of 500 in order to bat just once in the Test match. READ: South Africa vs West Indies 2nd Test Day 1 Highlights here

Both teams had made a couple of changes to their sides. South Africa handed out a debut Test to Temba Buvama in place of the injured Quinton de Kock and Imran Tahir in place of Kyle Abbott. West Indies also made a forced change, replacing Kemar Roach with Jason Holder and they also drafted into the eleven debutant Kenroy Peters and Shannon Gabriel in in place of Jermaine Blackwood and Sheldon Cottrell. READ: Alviro Petersen’s poor run hurting South Africa in top-order

South Africa started on a good note with Faf du Plessis getting a boundary of the off the first ball of the day to bring up his fourth Tests century. However, West Indies struck back the very next ball claiming the all-important wicket of du Plessis as Jerome Taylor sends him back after making him caught behind by Denesh Ramdin.

Play called off due to rain

Meanwhile, this is what happened yeaterday.

AB de Villiers has a sleep in the dressing room while his team mates bat against the West Indies 🙂 #SAvWI #Cricket pic.twitter.com/YroyjV04LZ

14 batsmen were unbeaten on 99 at end of a day in Tests. All of them went on to complete their century, including du Plessis @AltCricket — Bharath Seervi (@SeerviBharath) December 27, 2014

South Africa 289/3 | Overs 94
Hashim Amla 23 (49), AB de Villiers 9 (18)
Rain Stoppage!!!! So the rain comes down again to play spoil sport as the players walk out of the field and covers are back on. Meanwhile, both Amla and de Villiers are looking in good touch playing reasonably well with a good amount of boundaries coming in the past few overs.
South Africa 276/3 | Overs 89
Hashim Amla 18 (34), AB de Villiers 1 (3)
GONE!!!!! What a start to the West Indies’s day. Wicket in the second delivery of the day and it’s the all important Faf du Plessis who deaprts after bringing up his fourth Test century in the first ball of the day with a boundary. AB de Villiers comes in.
OUT! F du Plessis c †Ramdin b Taylor 103 (230)

First ball of the day and @faf1307 sends the ball away for his 4th Test ton! He grafted hard. #StandingO #ProteaFire pic.twitter.com/zwx2A1W66X

According to AFP, Dean Elgar and Faf du Plessis punished the West Indies for fielding lapses as South Africa built a strong position on the first day of the second Test in Port Elizabeth on Friday. South Africa were 270 for two at the close after being sent in to bat in overcast conditions at St George’s Park. Elgar made a Test-best 121 and shared a second wicket partnership of 179 with Du Plessis, who finished the day on 99 not out. READ: Dean Elgar: South Africa’s next first-choice opener in the making

The West Indies missed four chances to break the Elgar-Du Plessis stand. The West Indian bowlers could feel aggrieved as they bowled with much better control and discipline than they did in Centurion where they were heavily beaten by an innings and 220 runs in the first Test. 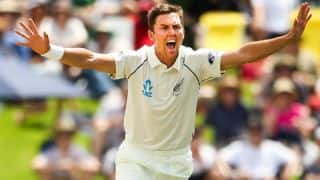 Trent Boult pleased to deliver against 'quality' Sri Lankan side