Kraigg Brathwaite and Marlon Samuels took charge of the innings and score a healthy score of 147.

Hello and welcome to CricketCountry’s live blog of the third day’s play at Port Elizabeth between South Africa and the West Indies here. This is Ayush Gupta, and I will be bringing you the updates of the match.

After a strong comeback by the West Indies on the third day of the play, South Africa suffered a number of setbacks right from the start as the batsmen couldn’t deliver and wickets kept tumbling at regular intervals. However, it was fast-bowler, Dale Steyn who rocked with the bat for South Africa scoring a quick-fire 58 of 28 deliveries becoming the second South African to score fastest Test fifty and seventh in the world as South Africa declared for 417 for the loss of eight.

As West Indies were out to bat, they continued to bat with the strong character and eventually score the opening 50-run stand. However, following quick dismissal of Devon Smith and Leon Johnson, Kraigg Brathwaite and Marlon Samuels took charge of the innings and score a healthy score of 147 including their respective half-centuries as the third day come to a close.

That’s it for today. Play has been called off for today following heavy rain as the rain gods again save the day for the West Indies players to go into the final day with the match almost looking certain and heading towards a draw. Goodbye for now, will join again tomorrow.

West Indies 275/9 | Overs 79
Jerome Taylor 10 (13).
AND AGAIN!!!! Dear oh dear! It keeps to crumble as Kenroy Peters is run out by Dale Steyn. He departs for a golden duck as the West Indies are down to their final pair, but it’s rain stoppage again.
OUT! Kenroy Peters run out 0 (3)
West Indies 273/8 | Overs 78
Jerome Taylor 8 (7), Kenroy Peters 0 (3)
GONE AGAIN!!!! West Indies continue to crumble after a good start to the innings and it’s Imran Tahir again who gets the wicket of Sulieman Benn as he is dismissed for four.
West Indies 265/7 | Overs 75.1
Jerome Taylor 4 (3)
OUT!!!! It’s two in an over and it’s Imran Tahir who dismisses Chanderpaul and Ramdin in the same over. South Africans are claiming couple at a time. Jason Holder departs as well in the next over off Morne Morkel and West Indies are crumbling.
OUT! Denesh Ramdin lbw b Tahir 20 (24), Shivnarine Chanderpaul b Tahir 7 (29), Jason Holder c de Villiers b Morkel 1 (2)
West Indies 255/4 | Overs 74
Shivnarine Chanderpaul 5 (18), Denesh Ramdin 17 (21)
Good start to the post tea session for West Indies. No harm is done and batsmen Chanderpaul and skipper, Ramdin continue to bat good as they look to play sensibly being fresh to the crease.

West Indies 237/4 | Overs 66
OUT!!!! It has been a massive six overs for the West Indies batsmen as they have smashed it all over the park bringing up the 200 for the team, 150-run stand for the third wicket and also the individual centuries by Samuels and Brathwaite. However, Samuels was trapped leg-before by Vernon Philander. So does Brathwaite who is dismissed by Morne Morkel. A respectable innings comes to an end.
OUT! Marlon Samuels lbw b Philnader 101 (160), Kraigg Brathwaite c Petersen b M Morkel 106 (186)

West Indies 199/2 | Overs 60
Marlon Samuels 88 (168), Kraigg Brathwaite 89 (145)
As play resumes after a brief interruption by the rain, West Indies are on it again as Samuel;s looks to take apart the South African bowling attack with some powerful hitting.

West Indies 180/2 | Overs 55
Marlon Samuels 75 (123), Kraigg Brathwaite 83 (160)
The same story continues. South Africa have failed to get a breakthrough so far in the day at an hour mark. West Indies are clearly in control with Samuels and Brathwaite playing good and steering the the innings towards a good total.
West Indies 167/2 | Overs 50
Marlon Samuels 67 (110), Kraigg Brathwaite 78 (143)
No harm done in the next five overs as both the men are in total control and the South African bowlers seem to struggle with the bowl to get the early breakthrough even in the overcast conditions, but a 100-run stand between the two for the third wicket is good enough.
West Indies 151/2 | Overs 45
Marlon Samuels 64 (98), Kraigg Brathwaite 65 (125)
As the day starts with the first ball after lunch following a session of rain interruption, no harm is done and both the West Indian batsmen are in control as they look to steer the innings and not allow South Africa to gain early control with setbacks.

Start delayed due to rain

A look at Sachin Tendulkar’s most treasured assets 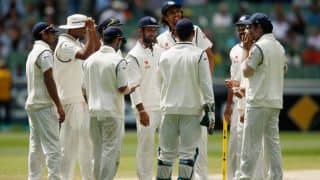