Catch the live updates of the first day's play of the second Test at Port Elizabeth here.

(South Africa will aim to carry the momentum in the second Test, and the West Indies will be up against another huge challenge. Catch Live Cricket Scores of the match here)

Both South Africa and West Indies have expectedly made a couple of changes. Temba Bavuma makes his debut in place of Quinton de Kock and Imran Tahir has been preferred ahead of Kyle Abbott as spin is likely to play a bigger part at Port Elizabeth. South Africa are going into the match with a horses for courses approach. West Indies on the other hand have made a forced change with Kemar Roach out, Jason Holder has been handed his second Test match cap and Shannon Gabriel has replaced the largely ineffective Sheldon Cottrell. They’ve strengthened the bowling attack further by adding Kenroy Peters in place of Jemaine Blackwood.

West Indies win the toss and elect to bowl

Herschelle Gibbs presents Temba Bavuma his Test cap. Bavuma raplaces Quinton de Kock who had injured his ankle in practice during the first Test at Centurion. Bavuma is the second debutant for South Africa in as many matches.

Hello and welcome to CricketCountry’s live blog of the second Test, Day One’s play between South Africa and the West Indies at the St. George’s Park in Port Elizabeth on Friday. This is Ayush Gupta, and I will be bringing you the updates from the opening day’s play. PREVIEW: South Africa vs West Indies 2nd Test

South Africa lead the three-match series 1-0, having smashed the tourists by an inings and 220 runs at the Supersports Park in Centurion last week. Dale Steyn was the hero for the South Africans in the second innings, after Hashim Amla and AB de Villiers smashed centuries in the first essay.

According to AFP,  West Indian captain Denesh Ramdin said on Thursday he believed his team’s problems against South Africa was a lack of self-belief although he stressed several times they were up against the No. 1 team in the world. Speaking ahead of the second Test, which starts at St George’s Park on Friday, Ramdin said: “We need to believe in ourselves.”

He highlighted the failure of any West Indian batsman to score more than 39 on the way to defeat by an innings and 220 runs in the first Test in Centurion. The West Indies batting line-up had been significantly weakened prior to the tour with the withdrawals of explosive opener Chris Gayle and the experienced Darren Bravo. “We’ve stressed to the guys who got starts in the first Test that they need to kick on to 70, 80, even a hundred,” Ramdin added. 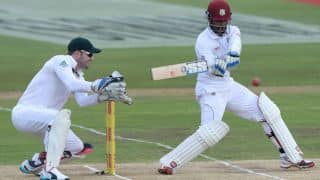