The final match would see some changes from the Proteas as AB de Villiers is likely to be rested.

By Rishad DSouza and Amit Banerjee

(With South Africa taking an unassailable lead, will West Indies show some fight and restore their pride? Catch the Live Cricket Scores of the 5th ODI between South Africa and West Indies here)

Hello and welcome to CricketCountry’s live blog of the fifth One-Day International (ODI) between South Africa and West Indies at Centurion. I am Rishad D’Souza, and I will bring you live updates from this match.

That’s it from us at CricketCountry. Do join us for live coverage of the seventh and final ODI between New Zealand and Sri Lanka at the Westpac Stadium in Wellington in a few hours time. Goodbye!

Rilee Rossouw is awarded the ‘Man-of-the-Match‘ for his whirlwind knock of 132 from 98 deliveries that included nine fours and eight sixes. It has been a mixed series for Rossouw as he scored two centuries and got dismissed on single-digit scores thrice in the same series. He has had two 247-run stands in the series, both of which were added with Hashim Amla, who won the ‘Man-of-the-Series‘ award for topping the batting charts with an aggregate of 413 runs from four innings, including two centuries and as many fifties, at an outstanding average of 206.

Darren Sammy managed to delay the inevitable for quite some time, as his knock of 27 from 25 balls, including five boundaries, helped West Indies add 34 runs for the fall of the last two wickets. Farhaan Beharidien completed the formalities for South Africa as Sammy played the delivery that was pitched outside off onto his stumps. A dominating 131-run victory for South Africa as they win the series 4-1.

West Indies have collapsed from 172 for three to 196 for eight, as Samuels and Ramdin departed on scores of 50 and 40 respectively. The dismissals, which occurred in a space of four deliveries, had a major impact on the rest of the batting order as the wickets seemed to fall like a pack of card. Only Andre Russell (24 off 12) and Darren Sammy (16 off nine) have managed to put up a bit of a fight, as Wayne Parnell is on the verge of recording another five-wicket haul in an ODI innings.

Marlon Samuels and Denesh Ramdin have stabilised the West Indian innings, scoring at a rapid pace and adding 89 runs for the fourth wicket in less than 13 overs, with Samuels bringing up his 25th ODI fifty. While chasing the target down at this stage would still be a herculean task, the duo possess the capability to bring West Indies close to the target.

Dwayne Smith and Narsingh Deonarine attacked the South African bowling unit for quite some time, putting up a 77-run stand for the second wicket in just 74 deliveries. Phangiso managed to get the much-needed breakthrough when he trapped Smith plumb leg-before on a score of 31 from 28 balls. Deonarine joined him in the pavilion soon after, getting run out on 43 off 50 balls, leaving West Indies struggling at 81 for three.

West Indies have begun positively. They are placed at 68 for the loss of just a single wicket after ten overs. But they’re chasing a score of 362 in just 42 overs and they must be cautious to not let the run-rate drop drastically, while continuing to preserve their wickets.

The match will commence at 4pm local time, about 20 minutes from here. Let’s hope that the rain doesn’t return in the meanwhile. Match has been shortened to 42 overs a side. Stay updated for the toss.

Cricket South Africa has tweeted some positive news. The covers are coming off and we hope the rain stays away for the duration of the match from here.

Good news, the covers are coming off. pic.twitter.com/5Bkx3iKvOT

There’s fresh news, but it’s not great news I’m afraid. The rain has returned just when the toss was finally going to take place. Further delay.

So much for that. Rain is back… pic.twitter.com/cxLxXXlBqZ

South Africa have already sealed the series by a margin of 3-1 but they will face West Indies in fifth ODI which will we played on Wednesday at Centurion. This match will be crucial for both teams after this encounter both teams will proceed for the ICC World Cup 2015 which will be held in Australia and New Zealand. West Indies will be high on energy after sealing the fourth ODI by a slim margin of just one run.

While on the other hand, South Africa will be really disappointed after the Port Elizabeth loss as they were carrying on in a dominating fashion but that match just broke the winning momentum. The match was really close and any of the teams could have won the match as it was really closely placed but Andre Russell big hoicks in the final overs enabled the West Indies team to seal the match and it was a much needed win for them as they had not been playing their best cricket. 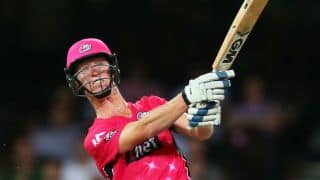