Catch live updates of Day Four of the first Test between South Africa and West Indies.

Hello and welcome to CricketCountry’s live coverage of Day Four of the First Test between South Africa and West Indies. I am Ankur Dhawan and I will be bringing all the updates of the day. Read the day report of Day Three’s play here.

Dale Steyn has got a fifer for the innings. Its his 25th Five wicket haul in Test cricket. He was fired up after missing out on contributing in the wickets column in the first innings. He has made amends on Day four, running through the West Indies middle order in no time.

West Indies 131 | 42.3 Overs
Sulieman Benn 6 (18)
That’s it Hashim Amla’s men have won this Test match by a huge margin. West Indies need to introspect after this huge loss.
West Indies 121/8 | 40.3 Overs
Dale Steyn gets a fifer as Jerome Taylor becomes the fifth West Indian to fall for a single digit score and the 8th wicket of the innings. Steyn has picked up a 25th five wicket haul in Test cricket with the wicket of Taylor
OUT! Jerome Taylor 9 (10) C Amla B Steyn
West Indies 117/7 | 39.3 Overs
Jerome Taylor 5 (7)
West Indies are down in the doldrums as Steyn sinks his teeth deeper into their middle order. Steyn struck his fourth blow for the morning , dismissing Denesh Ramdin for four. Morkel joined the party getting his second wicket for the innings, that of Blackwood whose torrid stay at the crease ended. South Africa are well on their way to wrapping up this Test match before lunch.
OUT! Jermaine Blackwood C Buvama B Morkel
West Indies 105/6 | 36.4 Overs
Dale stays gets two in an over. Ramdin struck a boundary of his first ball but was snapped up by Dale Steyn next ball. Steyn’s clearly back in his element and the West Indies are facing his wrath. He’s got his fourth wicket for the morning. Caught de Villiers bowled Steyn has been the flavour of the day.
OUT! Denesh Ramdin 4 (2) c de Villiers B Steyn
West Indies 101/5 | 36.2 Overs
Jermaine Blackwood 8 (7)
Dale Steyn’s not only shown incredible recovery time from the groin injury he’d sustained on day 3 but is back to his quintessential best. He’s provided South Africa an early opening into Day 4. With this session being half an hour longer than usual, South Africa have an opportunity to skittle West Indies out before lunch.
OUT! Marlon Samuels C Elgar B Steyn
West Indies 91/4 | 34.4 Overs
The unthinkable has transpired as Shivnarine Chanderpaul fails to make an impact in a Test match. Dale Steyn has accounted for the prized scalp of Chanderpaul. West Indies are in deeper strife at 91 for four with half their batting fire power back in the hut.
OUT! Shivnarine Chanderpaul 4 (9) C de Villiers B Steyn
West Indies 87/3 | 33.1 Overs
Dale Steyn opens his account on the wickets column as he strikes for South Africa early on Day four. Leon Johnson poked at a Steyn out swinger that should ideally have been left alone. Its the second time in the match Johnson’s been unable to capitalise on a promising start. He is dismissed for 39 and West Indies lose their third wicket with the score board reading 87.
OUT! Leon Johnson C de Villiers B Steyn
West Indies 81/2 | 30 Overs
L. Johnson 33 (79) M.Samuels 17 (39)
West Indies still need 270 runs to make south Africa bat again.

West Indies have batted twice on Day three of the first Test against South Africa at Centurion. Following on, the tourists finished the day at 76 for two. Vernon Philander and Morne Morkel did bulk of the damage for South Africa. None of the West Indies top order managed a half century in either innings, despite the fact that a number of them had entered their 20’s and 30’s. Their ineptness to convert promising starts into something substantial has been their Achilles heel in recent years.

West Indies showed glimpses of their ability as they began the day positively with the openers adding 72 runs for the opening wicket. But their inability to dig in for long hours and put together a sustained performance with the bat was also glaring by the end of the day. They developed a penchant for losing wickets in clusters as the day progressed. Vernon Philander was the wrecker in chief for South Africa in the first innings picking up four wickets for a measly 29 runs.West Indies lost their last seven wickets for a paltry 29 runs in the first innings.

South Africa defied convention by enforcing the follow on after securing a 351-run first innings lead. The West Indies opening pair failed to replicate their effort of the first innings as Devon Smith was dismissed early by a rampaging Vernon Philander. Replays yet again suggested that Devon may have been slightly unlucky, as was the case in the first innings. Down in the doldrums, it came as a relief to the tourists when Dale Steyn and Vernon Philander went off the park due to injury. It has been an injury plagued Test match with West Indies losing the services of Kemar Roach on Day-One. 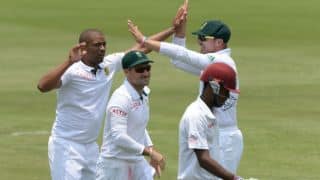