Catch all the updates of Day three of the First Test between South Africa and West Indies here.

West Indies 76/2 | Overs 27
Leon Johnson 33 (73), Marlon Samuels 13 (26)
West Indies finished Day three at 76 for two in their second innings still trailing the hosts by 275 runs. The wicket of Kraigg Bathwaite at the fag end of the day leaves South Africa just seven wickets away from winning the Test match. Dale Steyn returned to field in the closing stages, so chances are he’ll be back bowling for South Africa tomorrow. West Indies have a long road ahead of them before they can realistically entertain thoughts about saving this Test.
West Indies 38/1 | Overs 16
K Brathwaite 15 (46), Leon Johnson 13(41)
West Indies were off to a disastrous start after being asked to follow on as they lost Devon Smith early into the final session. On a injury plagued day they still have an opportunity to make amends for their abysmal showing in the first innings. Both Dale Steyn and Vernon Philander are off the park which essentially leaves South Africa with two main bowling options. Stiaan van Zyl and Deal Elgar are making up the overs for South Africa in the absence of Steyn and Philander.
West Indies 156/3 | Overs 46
Marlon Samuels 29 (63), Shivnarine Chanderpaul 18 (37)
West Indies go past 150 with Marlon Samuels and Shivnarine Chanderpaul on a rescue mission. Both Dale Steyn and Morne Morkel have been off colour thus far. They’ve failed to pick up a single wicket but barring that their bowling itself has looked rusty. The fact that they Haven’t had much cricket preceding this first Test is being reflected in this bowling performance. Morkel has now resorted to the tactic of bowling into the rib cage of Samuels. West Indies still trail South Africa by 396 runs and the follow on margin is still 197 runs adrift.
West Indies 117/3 | Overs 35
Marlon Samuels 9 (28), Shivnarine Chanderpaul 0 (5)
Marlon Samuels and Shivnarine Chaderpaul have their work cut out as they will have to rebuild the innings from scratch after three quick wickets rocked their charge on either side of lunch. The two openers got promising 30’s but failed to convert them into anything substantial, same was the case with number three batsman, Leon Johnson. Their batsmen’s inability to convert attractive 30’s and 40’s into scores that win or save Test matches against top teams has been West Indies’ Achilles heel in recent years. The onus is on Samuels and Chanderpaul to change that and help West Indies at least save the follow on.
OUT! Leon Johnson 31 (42) C R Petersen b Abbott
West Indies 44/0 | Overs 13
D Smith 25(45), K Brathwaite 18(33)
Kraigg Brathwaite and the in form Devon Smith have begun not only solidly but positively against the formidable Proteas attack. There solidity should calm the nerves in the dressing room as well.West Indies’ challenge on this beautiful Centurion pitch that has fetched a total of almost 600 runs for the loss of just five wickets, will be to not wilt under score board pressure. They should ideally set small targets for themselves, leading to the ultimate target, which at this stage is to ensure they avoid the follow on. Avoiding the follow will most likely secure them a draw against all odds against the number one team in the World in their own backyard.
West Indies 8/0 | Overs 4
D Smith 5(15), K Brathwaite 3(9)
Dale Steyn and Vernon Philander open the bowling for South Africa as the West Indian openers walk out to bat. Just two of Steyn’s first over. Philander now. Four runs off that one. Steyn again, just one more. Now Philander, and it’s another one-run over. Good, steady start for West Indies.

Hello and welcome to CricketCountry’s live coverage of the First Test between South Africa and West Indies here. I am Ankur Dhawan and I will be bringing all the updates of Day Three.

South African captain Hashim Amla hit his third Test double century and Stiaan van Zyl made a hundred on debut before rain brought a premature end to the second day of the first Test against West Indies on Thursday. Amla made 208 and the left-handed Van Zyl hit an unbeaten 101 as South Africa piled up 552 for five declared.

But rain swept across SuperSport Park soon after the declaration, preventing a start to the West Indies first innings and denying Amla the chance to make inroads into the tourists’ batting. “I wanted to get in 35 or 36 overs [to bowl] before the close,” said Amla. “When the declaration came, there were a possible 38 overs left in the day, but the weather had the final say.

“We’ve done our bit to try and get as much time as possible to bowl. For us it’s been a lovely two days. When we come out tomorrow we will have three days to try to get 20 wickets.” It was another day of suffering for a depleted West Indian bowling attack. Left-arm spinner Suleiman Benn took the only two wickets to fall on Thursday, dismissing AB de Villiers for 152 and having Amla caught on the long-on boundary.

In between, Amla and Van Zyl put on 155 off 37 overs for the fifth wicket, while Benn was forced to toil for 46 overs and conceded a total of 148 runs. The West Indies were without fast bowler Kemar Roach, who left the field on Monday afternoon after injuring his right ankle. A team spokesman said scans had revealed no significant damage but it was hoped he would be able to bowl later in the match.

Roach’s injury left the tourists with only three front-line bowlers, with Jerome Taylor and Sheldon Cottrell providing pace and Benn needing to tie up one end with spin. And the West Indies were unable to prevent the total from mounting steadily, despite captain Denesh Ramdin setting defensive fields.

There was early success when De Villiers sliced a flighted delivery from Benn to Jerome Blackwood at point, ending a South African Test fourth-wicket record partnership of 308 with Amla. The pair had come together at 57 for three after all three wickets fell without a run being added.

Van Zyl started cautiously and was troubled by the tall Benn early on, giving a sharp, low chance to Kraigg Brathwaite at leg gully when he had two.  But he quickly settled in and played some handsome drives on the off side as he reached a maiden Test half-century off 74 balls with eight fours, AFP reported. 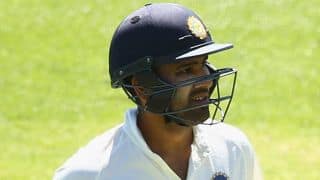