Catch live update of the 2nd ODI between Sri Lanka and England here.

(With 0-1 down in the seven match series, can England make a comeback in the series or will Sri Lanka continue their domination? Catch live scores of the match here)

Sri Lanka: 186/2 | Overs 34.2
Kumar Sangakkara 67(93), Mahela Jayawardane 77(80)
THAT”S IT!! Sri Lanka beat England by eight wickets. Thanks to twin half-centuries from Jayawardene and Sangakkara as the Lankans earn 2-0 victory in the seven-match series. Man of the Match – Mahela Jayawardene.

Sri Lanka: 143/2 | Overs 30
Kumar Sangakkara 48(78), Mahela Jayawardane 53(69)
Extremely good gameplay by both the batsmen as they bring-up a 100-run partnership for the third wicket while Jayawardene scores his half-century and Sangakkara also nears one as he enters the 40s.

Sri Lanka: 109/2 | Overs 24
Kumar Sangakkara 28(56), Mahela Jayawardene 39(55)
No harm done so far again as both Sangakkara and Jayawardane are batting impressively well and are not giving any chance to the English bowlers to settle down. Although they are bowling tight, any loose ball is surely being smacked for a boundary. 100 up for the Lankans.
Sri Lanka: 78/2 | Overs 17
Kumar Sangakkara 15(35), Mahela Jayawardene 22(34)
Another good five overs from Sri Lanka’s perspective with no harm done and they continue to bat brilliantly. Although the bowlers are giving a tough time, but they are managing to get the singles and couples along with occasional boundaries.
Sri Lanka: 59/2 | Overs 12
Kumar Sangakkara 7(19), Mahela Jayawardene 13(20)
After two quick loss of wickets, Sri Lanka look to settle down as the two batsmen, Sangakkara and Jayawardane make sure that they don’t lose further wickets and chase the total down comfortably. Both are occasionally looking for the big shots as well.

Sri Lanka: 41/2 | Overs 8
Kumar Sangakkara 5(15), Mahela Jayawardene 0(0)
OUT!! No. 2 down for Sri Lanka and it’s the big hitter Tilliakaratane Dilshan who has to depart for 26 off 23 deliveries. Charges forward for a biggie off Moeen Ali, sends up high in the air to be comfortably taken by Chris Woakes
OUT! Tillakaratne Dilshan 26(23) c Woakes b Ali
Sri Lanka: 28/1 | Overs 6
Tillakaratne Dilshan 18(16), Kumar Sangakkara 0(10)
OUT!! First break-through for England and it’s Kusal Perera who has to depart for just 9 off 10 deliveries as Steven Finn makes him get caught to Ravi Bopara.
OUT! Kusal Perera 9(10) c Bopara b Finn
Sri Lanka: 12/0 | Overs 1
T Dilshan 12(6), K Perera 0(0)
Here comes Steve Finn, bowling to Dilshan. And he starts off with a four! Dot ball, and another boundary! Another dot ball, and fouro more runs. Great start to the innings for Sri Lanka!
England: 185 | Overs 43
James Tredwell 9(8)
THAT”S IT!!!! England have been bundled out for mere 185 with Harry Gurney the last man to be dismissed off Dhhamika Prasad. Sri Lanka need 186 to win in 45 overs and should be a comfortable chase for them.
OUT! Harry Gurney 1(5) b Prasad

England’s boundary count is well down on the first #SLvENG ODI… pic.twitter.com/ilsiFgrxkU

England: 179/7 | Overs 41
Ravi Bopara 51(67), James Tredwell 5(5)
GONE!!!! Chris Woakes departs for just 15 as he is stumped by Sangakkara who is brilliant behind the stumps. Ajantha Mendis strikes as England are down to the final three and the tail-enders start to chip in. Bopara meanwhile gets his half-century.
OUT! Chris Woakes 15(20) st Sangakkara b A Mendis
England: 149/6 | Overs 36
Ravi Bopara 33(50), Chris Woakes 7(12)
No harm done as both the batsmen have taken control for the seventh wicket. Bopara is nearing his fifty as he enters his 30s while Woakes is still in his single figure.
England: 132/6 | Overs 32
Ravi Bopara 25(35), Chris Woakes 0(2)
GONE!!!!!! Buttler gets clean bowled by Dhhamika Prasad. Second time in a row for both the men and in same style off an inside edge on a length ball as stumps crashed by the ball. Chris Woakes comes in.
OUT! Jos Buttler 7(14) b Prasad
England: 130/5 | Overs 31
Ravi Bopara 25(35), Jos Buttler 5(10)
Root departed for a brilliant 42 and was looking strong. However, Bopara and Butler have taken control would surely look to make sure that they don’t mess up anymore as half of the team is already back to the pavilion.
England: 120/5 | Overs 28
Ravi Bopara 19(23), Jos Buttler 1(4)
OUT!!!! It’s a big one as Joe Root who departs for 42, missing his half-century by eight runs. Mathews traps him leg-before clean enough as he walks off and makes way for Jos Buttler.
OUT! Joe Root 42(57) lbw b Mathews
England: 113/4 | Overs 26
Joe Root 40(54), Ravi Bopara 16(18)
No harm done so far as both the batsmen continue to play brilliantly with Root having a good time so far in the crease and Bopara occasionally going for some exquisite shots. However, credit must be give to Sri Lankan players for their brilliant fielding so far. 100 comes up as well for England.
England: 94/4 | Overs 23
Joe Root 29(41), Ravi Bopara 9(12)
Joe Root and Ravi Bopara take control after the departure of Eoin Morgan who was going strong and as well was putting a strong partnership with Root. Bopara is looking to steer the innings with a good amount of boundaries, however, the slow out-field is creating problems.
England: 75/4 | Overs 20
Joe Root 19(32), Ravi Bopara 0(3)
OUT!!!!! Just as I was saying, they losing another. Morgan departs now for just 17 off 29 as Thisara Perera gets him caught off Thirimane. Ravi Bopara comes in.
OUT! Eoin Morgan 14(28) c bThirimane b T Perera
England: 74/3 | Overs 19
Joe Root 18(30), Eoin Morgan 14(28)
No harm done as both the batsmen have so far taken firm control on the innings and are making sure to play a steady innings without suffering any more setbacks and post a big total. Meanwhile, Root survives a close call for a leg-before off Dilshan.
England: 63/3 | Overs 14
Joe Root 10(13), Eoin Morgan 14(21)
Three wickets lost early in the innings as Joe Root and Eoin Morgan take control of the English innings. Sri Lnakan spinners are having a great time as they are bowling really tight in thew right areas and length hardly giving any room to the batsmen. Morgan however is looking in a good touch after smashing a couple of boundaries. Fifty comes up as well for England.

England: 44/3 | Overs 11
Joe Root 2(3), Eoin Morgan 5(7)
GONE AGAIN!!!!!! Dear Oh Dear, what’s happening here!!!! England are starting to crumble so early in the innings as Cook too departs early for 22 off Dishan as he sweeps it straight to Kushal Perera.
OUT! Alastair Cook 22(37) c K Perera b Dilshan
England: 37/2 | Overs 9
Alastair Cook 22(35), Joe Root 0(0)
OUT AGAIN!!!!!! It’s Ian Bell now who falls early on his 150th ODI. Herath bowls a good one as Bell charges out for a biggie, mistimes it and comfortably taken by Thisara Perera who comes running down form mid-on.
OUT! Ian Bell 11(12) c Perera b Herath
England: 27/1 | Overs 6
Alastair Cook 16(22), Ian Bell 7(7)
Early loss for England in the form of Moeen Ali, but Alaister Cook and Ina Bell, who is playing his 150th ODI make sure that they do not suffer anymore setbacks, especially in the poweplay and reach a good total as well as put up a good partnership. Cook is though looking in a good touch.
England: 7/1 | Overs 2
Alastair Cook 4(5), Ian Bell 0(0)
OUT!!!!!!!! Just what England didn’t wnat but just what Sri Lanka wanted. Moeen Ali is dismissed for cheap two off Dilshan. Slow ball and kept low, Moeen charged forward for the shot, missed it completely and the ball was on to the off-stump.
OUT! Moeen Ali 2(7) b Dilshan
England: 3/0 | Overs 1
Moeen Ali 1(4), Alastair Cook 1(2)
Slow start to the England innings as Moeen Ali and skipper, Alaister Cook open the innings. Match being curtailed to 45-overs per side with the mandatory powerplay up to the first nine overs.

Flags at half mast for Hughes at the Premadasa. A condolence book will be signed and a minute of silence observed pic.twitter.com/xBvc12fwfD

The covers are coming off. Amazing how quickly the staff here clear the ground. #SLvEng pic.twitter.com/WCrpwWQVru

Hello and welcome to CricketCountry’s live coverage of the second One-Day International (ODI) between Sri Lanka and England which will be played at Colombo. I am Ayush Gupta and I will be bringing all the live updates of the match.

Sri Lanka will take on England in the second One-Day International (ODI) of the ongoing seven-match series on Saturday. The hosts won the first game by 25 runs and lead the 1-0 but the English team looked very competitive and they would look to push for a win the second game. It will be tough for both the teams to take field, as the entire cricketing fraternity is still in shock, because of the unfortunate demise of Phillip Hughes.

Sri Lanka, still healing from the wounds they suffered against India, are surely filled with anger and frustration out of the heavy defeat, and must be hungry to neutralise their humiliation with some solid performance at home. Sadly, it’s going to be England who would have to face the angry-hungry devils, especially in their own backyard where they are most vulnerable.

England themselves did not have a good year as they lost 12 of the 17 ODIs they have played this year so far. They eventually lost the opening game against Sri Lanka in the ongoing tour by just 25 runs. Despite being a close call, nevertheless a loss would surely mean a setback for them in the build-up to the World Cup, which is scheduled to get underway early next year in Australia and New Zealand. 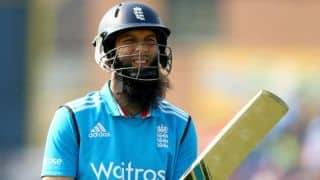