England will aim to bounce back as they trail 3-1 against Sri Lanka after four One-Day Internationals (ODIs).

England will aim to bounce back as they trail 3-1 against Sri Lanka after four One-Day Internationals (ODIs). The fifth match will be played at Pallekele on Wednesday.

Sri Lanka lead this seven-match series 3-1 as in the fourth match, Kumar Sangakkara hit 86 as Sri Lanka squeezed past England with six wickets and two balls to spare.  James Taylor missed a maiden one-day century by 10 runs as England, electing to take first strike, scored 265 before they were all out off the last ball of their 50 overs in Colombo, AFP reported.

But Sangakkara’s 90th one-day half-century laid the foundation that enabled Sri Lanka to pass the target in the day game at Premadasa stadium. The left-hander put on 96 for the third wicket with fellow veteran Mahela Jayawardene (44) and 49 for the fourth with skipper Angelo Mathews. 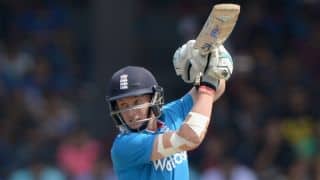