Sri Lanka will aim to give a fitting farewell to Kumar Sangakkara and Mahela Jayawardene.

Sri Lanka will aim to give a fitting farewell to Kumar Sangakkara and Mahela Jayawardene, who will be playing their final One-Day International (ODI) in the country, against England at Colombo on Tuesday.

Kumar Sangakkara slammed a run-a-ball 112 on Saturday to set up Sri Lanka’s series-clinching 90-run victory over England in the sixth ODI, AFP reported. The victory helped Sri Lanka take an unassailable 4-2 lead in the seven-match series with one more game to be played in Colombo on Tuesday.

The in-form Sangakkara hit 12 fours and two sixes as Sri Lanka posted an imposing 292-7 before bowling out the visitors for 202 off 41.3 overs. It was the 20th ODI ton for the stylish left-hander, who is set to retire after the World Cup early next year. 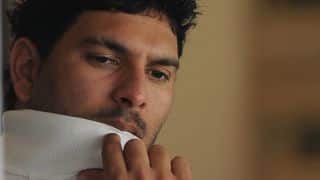 Yuvraj Singh’s mind is strong; but body has to support in pursuit of encore