Hello and Welcome to live coverage of Day 1 of Sri Lanka Tour to England at CricketCountry as they begin their tour with 3 day practice match beginning from Sunday. Sri Lanka will be now playing with Essex for three days at Chelmsford. Following this they will also be playing with Leicestershire beginning from May 13. Angelo Mathews is heading this tour while Ryan ten Doeschate will be leading for Essex. After a disastrous exit from T20 World Cup 2016 and Asia Cup T20 2016, they would want to bounce back with this tour. While the Tests matches begin from May 19 in Leeds. The teams then head to Chester-le-Street for the second Test, which begins on May 27, and the final Test of the series will be played in London at the Lord’s Cricket Ground on June 9.

Live Cricket Score, Essex 81/2 , Overs 24.5, Mickleberg 42 (73) : Essex opening pair Nickleberg and Nick Browne knew they had task on hand with 78 run stand. SL found it difficult to get the right target on time until Dhammika got hold of Browne on time and he was dismissed for 28. Mickle berg and Thomas Moore also wanted to end the innings on good note until Moore was gone for 3.

Live Cricket Score, Sri Lanka 254, Overs 63, Shaminda Eranga 0 (3) : Dhammika and Dickwella were continuing their play soon Dhammika tagged along Dickwella for adding runs on board with three fours in 58th over. After his small cameo he had to depart for 13 off 20 with Thomas Moore the new bowler getting the best with googly. Soon after Dickwella was scoring boundaries just then Thomas Moore got hold of his wicket and finally Thomas gets two wickets by the time SL were done with their innings as they were all-out for 254.

Live Cricket Score, Sri Lanka 212/7, Overs 53, Niroshan Dickwella 0 (2) Dhammika Prasad 0 (0): Dickwella and Mathews were going strong with their innings with Dickwella going for a boundary in every over tagging along an extra run as well along. Dickwella 30-odd runs on board took SL to 200-plus runs on scoreboard but it Ravi Bopara the spinner getting his first wicket of skipper Mathews this time as he was dismissed for 30 off 81.

Live Cricket Score, Sri Lanka 155/6, Overs 41 , Angelo Mathews 19 (51) Niroshan Dickwella 0 (2) : Aaron Beard is on a roll with his spells first grabbing Kusal Mendis for 66 and then later went on to grab the opportunity of new batsman Siriwardene. They were 142 for 5 and 4 of them were grabbed by Beard. Mathew was taking his pace of 16 runs while the new batsman joining him at the non strikers end was Dhananjaya de Silva. But managed to just make a cameo out of it with Ryder getting his wicket. By then SL managed to put up another 50 odd runs on board.

Live Cricket Score, Sri Lanka 107/3, Overs 25, Kusal Mendis 58 (80) Angelo Mathews 1 (8): Sri Lanka win toss and elect to bat first. Kaushal Silva and Kusal Mendis started the innings for SL with Kaushal going early in the first over. Karunarathne the new batsman tried to bring momentum to the innings, but unfortunately he was shown the way out as well with 2nd wicket for Aaron Beard. Dinesh Chandimal entered at No.4 and for a while Mendis, Chandimal carried their partnership strongly for a while. Until, Chandimal also had to depart after his valuable innings of 27 from 54. Skipper Angelo Mathews has taken charge along with Mendis.

OUT! Karunaratne lbw b Aaron Beard 8(7)

Kaushal Silva who was struck by an injury has been included for this tour as well. Rangana Herath who recently announced his retirement, will be playing as well for this tour. While England look confident after their stint in T20 World Cup and Test series against South Africa that went successfully at beginning of the year. 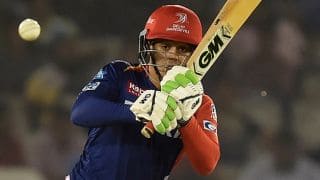