Hello and Welcome to live coverage of Day 2 between Sri Lanka and Essex. Sri Lanka were bowled out for 254 in the first innings. And the Lankans couldn’t get too much joy with the ball as well, with Essex firmly placed in the driving seat at 81/2 after 24.5 overs. Angelo Mathews is heading this tour for SL while Ryan ten Doeschate is leading Essex. Following this match, Sri Lanka will also be playing with Leicestershire beginning from May 13. After a disastrous exit from T20 World Cup 2016 and Asia Cup T20 2016, they would want to bounce back with this tour. While the Tests matches begin from May 19 in Leeds. The teams then head to Chester-le-Street for the second Test, which begins on May 27, and the final Test of the series will be played in London at the Lord’s Cricket Ground on June 9.

Live Cricket Score, Essex 89/2, Overs 31, Tom Westley 4(19), Jaik Mikleburgh 46(91): The batsmen take forward the innings in a controlled manner. From 81/2 at the end of last day, they have only managed to 8 runs in 6 overs. Nuwan Pradeep and Shaminda Eranga are bowling, hoping to get a wicket early on in the day. Mikleburgh is playing well, nearing his half century.

As for the squads, Malings remains away due to injury. Kaushal Silva who was struck by an injury has been included for this tour as well. Rangana Herath who recently announced his retirement, will be playing as well for this tour. While England look confident after their stint in T20 World Cup and Test series against South Africa that went successfully at beginning of the year.

Video: Yuvraj Singh gets out freakishly in his 100th IPL match 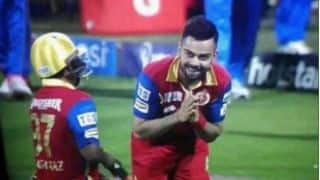