Catch the Live Score of the 5th Day's play of the 1st Test between Sri Lanka and Pakistan here.

Sri Lanka took a lead of 82 runs in the first essay. Saeed Ajmal was Pakistan’s most successful bowler with five wickets in his kitty. He sent down as many as 59.1 overs, giving away 166 runs. But it was only after the tea break on the fourth day that Ajmal came to party, as Sri Lankan batsmen made merry on the flat deck at the Galle Stadium.

Pakistan were 4/1 in their second essay at stumps after Sri Lanka declared their first innings at 533 for nine on Day Four  in the opening Test match at Galle. Ahmed Shehzad was batting on one alongwith nightwatchman Saeed Ajmal, who was yet to open his account. Pakistan were trailing by 78 runs. However, the day belonged to Kumar Sangakkara, who smashed his 10th double ton. 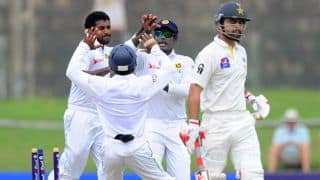