Catch live cricket scores and commentary of the fourth day’s play in the 2nd Test here.

(Pakistan have drawn the first blood, and it is time for Sri Lanka to step up for the challenge. Catch live cricket scores and commentary of the fourth day’s play in the 2nd Test here)

Dhammika Prasad receives award for Smart Player of the Match and is also the Man of the Match. Prasad picked up seven wickets and scored crucial 35 runs in the first innings.

This will be Kumar Sangakkara‘s final Test against Pakistan. Let us look at few highlights from the match. Tharindu Kaushal’s six wickets provided Sri Lanka an early upper-hand in the match. Later on, riding on Kaushal Silva and Angelo Mathews’s half-centuries, Sri Lanka took a lead. However, Pakistan was not ready to repeat the same mistakes of first innings. After Ahmed Shehzad strengthened the innings, Azhar Ali held fort and pushed Pakistan’s innings further. But, it was Dhammika Prasad’s four-wicket haul which the Pakistan could not avoid and Sri Lanka needed 153 to win from the last day in a Test match which was affected by rain, wet outfield and bad light over the last five days. READ the match report here.

Two dot balls and four runs. Sri Lanka win by seven wickets and level the series. Pakistan have a lot to introspect about.

Big LBW appeal and umpire signals out. Karunaratne takes the review. No inside edge shown on the review and ball is also shown to hit the wickets. Decision upheld. Karunaratne has to walk back. Three runs taken. Same delivery and appeal but umpire is not interested anymore. Quick single.

Karunaratne slams his sixth Test half-century. Sri Lanka need 36 runs to win. Short ball and good improvisation by Mathews as the ball runs for four runs at third man. 10 runs from the over.

Three runs. Ground staff getting ready with the covers. Things looking sad here. Dark clouds. They are waiting with the covers near the boundary, ready to run and cover, as the play continues. Misbah looks on. Sri Lanka are cruising easily ahead.

Kumar Sangakkara walks in to bat! Sri Lanka lose another wicket! Sangakkara departs for a duck! He is out for a golden duck. First against Pakistan. He has six golden ducks in his career!

The ball is turning a lot as Yasir Shah is introduced to the bowling attack. However, there is no stopping Vithanage. Slams it towards midwicket. Hit it from the middle of the bat. Four runs! Five runs from the over.

First ball, Karunaratne pushes it in the air and just misses Azhar Ali at short mid on. Goes for four runs. Very lucky. Dot ball. Third ball hits Karunaratne the middle and huge shout for LBW. Junaid does not feel sure. Sarfraz wants Misbah to DRS. Misbah does not goes up. Umpire counts till 15 seconds. No review taken. Dot ball. Single taken. Vithanage on strike. Strikes it over deep midwicket for four runs! Wonderful play by Vithanage! Sri Lanka need him to play well. Another beautiful drive on the off side. 11 runs from the over.

Dimuth Karunaratne and Kithuruwan Vithanage will be opening the batting for Sri Lanka. No Kaushal Silva. Junaid Khan to open the bowling for Pakistan.

It rained a lot in Colombo last night. However, the conditions look better this morning. But, the match will have a delayed start as the ground staff prepares the ground. The match will start around 10:15 AM. The session will continue till lunch, which will be at 12:30 PM. Tea will be 3:25 PM and end of day will be at 5:45 PM.

Hello and welcome to CricketCountry’s live blog of the fifth and final day’s play in the second Test between Sri Lanka and Pakistan at the P Sara Oval in Colombo on Sunday. This is Sudatta Mukherjee, and I will be bringing you the live cricket scores and live updates of this second Test. Sri Lanka vs Pakistan 2nd Test, Day 4 play abandoned due to rain

Although Pakistan were able to put up a stellar performance as compared to that of their first innings play, they were able to earn only a slender lead of 152 runs and have set a target of just 153 for the Sri Lankans to chase it down and draw level in this three-match series. PCB stops Mohammad Irfan from playing Ramzan T20 event

It was an impressive show with the bat from the Pakistan batsmen in the second innings as it was Azhar Ali and Ahmed Shehzad, who played a strong knock of 117 and 69, respectively and helped the visitors to earn the all important lead. However, whether the lead is strong enough would be proved by Day 5. Azhar Ali is integral for Pakistan at present and future

Among the Lankan bowlers, it was Dhammika Prasad, who put up impressive show with the ball, claiming four for 92, while Dushmantha Chameera claimed three for 53, as Pakistan were bundled for 329, and the lead doesn’t seem to be quite heavy for the Lankans to chase down. Wahab Riaz’s painful birthday bash 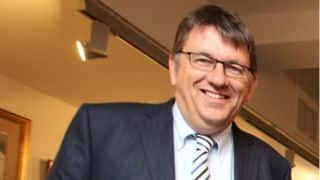